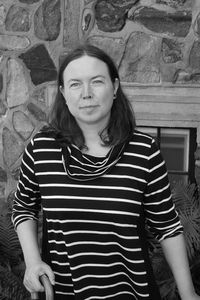 Emily Anglin's The Third Person (BookThug) is an electrifying debut. The uncanny short stories follow three characters whose worlds are, as the title suggests, disrupted when the third person arrives. Uncomfortable, fascinating, uneasy, and darkly funny, the book has drawn praise for its creativity. Kate Cayley called it "unsettling and new", while Giller winner Johanna Skibsrud praised the book, saying "reading Emily Anglin’s The Third Person is like watching the opening sequence of Hitchcock’s Rear Window".

We're getting to know Emily today through our WAR Series (Writers as Readers), where we asks authors to share with us about their favourite reads and the books that shaped them.

Emily tells us about laughing with Adrian Mole, the literary antidote for unrequited (teenage) love, and offers a very relatable possible title for a memoir.

The WAR Series: Writers as Readers, with Emily Anglin

The House with a Clock in its Walls by John Bellairs, part of a series of young adult Gothic mysteries set in small-town New England. I ordered his books from the Scholastic catalogue because of their amazing jacket illustrations by Edward Gorey.

The Overcoat by Gogol, because it’s so sad, empathetic, funny and moving.

Either Oliver Twist by Dickens or The Secret Diary of Adrian Mole by Sue Townsend.

Any of the books from the diaries of Adrian Mole series.

The Invisible Man by Ralph Ellison.

The rest of Elena Ferrante’s Neapolitan series. I was so transported and shaken by the time I finished My Brilliant Friend and then began the next book that I had to take a break, and haven’t returned to finish them yet, despite My Brilliant Friend being one of my favourite books I’ve read.

Eros the Bittersweet by Anne Carson. It might have helped me think my way out of teenage unrequited love.

It’s hard to choose between Donna Tartt’s The Secret History and Beckett’s Company. I love Tartt’s Gothic, realist depiction of a claustrophobic university town and her flawed characters. Beckett’s 1979 novella Company is sometimes called one of his “closed space” stories: a narrator lies alone on his back in a dark dome and remembers. In a way, The Secret History and Company are linked by their fascination with closed spaces of different kinds. I engage with closed spaces in my writing—buildings, rooms, or institutions—to try to capture a balance between realist and non-realist elements, in a way that I think I tried to study in both of these books.

The Vegetarian by Han Kang. It’s such a powerful meditation on, and cry against, the drive to control and dominate other people.

An Untamed State by Roxane Gay. Difficult Women and Hunger are both so exceptional; I read Gay’s later books first, and can’t wait to go back to her debut novel.

I’m Not Sure Yet: Ambivalence and the Places it Took Me

Writer and freelance editor Emily Anglin grew up in Waterloo, Ontario, and now lives in Toronto. Emily Anglin’s creative work has appeared in The New Quarterly, the Whitewall Review, and in the chapbook The Mysteries of Jupiter. She holds an MA in Creative Writing from Concordia University and a PhD in English Literature from Queen’s University, and also completed a postdoctoral fellowship with the University of Michigan’s English Department. Prior to her graduate studies, she studied English at the University of Waterloo. The Third Person is her debut book.

Two’s company, three’s a crowd—and sometimes it’s more than that.

In The Third Person, a collection of uncanny short stories by Emily Anglin, a sequence of tense professional and personal negotiations between two people is complicated when a third person arrives. Within these triangulated microworlds, disorienting gaps open up between words and reality: employees dissolve from job titles, neighbours overstep comfortable boundaries, voices distanced by space or time make their presence felt. Uneasiness builds among these separate but entangled lives.Anglin’s darkly humorous stories contemplate situations in which characters refashion themselves to fit a new competitive milieu. The Third Person reveals how people can become complicit in these milieus, even desire them, often while being led into the loneliness they can instil.