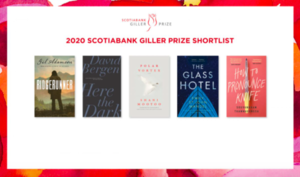 In a live online announcement this morning, five past winners of the Scotiabank Giller Prize announced the 2020 shortlist for the prize.

The strong presence of independent presses on the 14-title longlist continued through to the shortlist, with three out of five finalists published by independent Canadian publishing houses (House of Anansi Press, Biblioasis, and Book*hug Press). As well, two of the five nominated books are short fiction collections, notable in a list often dominated by novels.

Of the finalists, David Bergen and Shani Mootoo have both been previously nominated for the Giller, with Bergen winning the prize once. Gil Adamson's previous novel, The Outlander, won numerous awards, as did Souvankham Thammavongsa's three poetry collections. Emily St. John Mandel, who lives in New York City, has won numerous literary prizes around the world, in particular for Station Eleven, her international bestseller and most recent novel before The Glass Hotel.

Actor Eric McCormack of Will & Grace fame, will host the live broadcast event announcing the winner on November 9. The broadcast will also feature a performance by acclaimed jazz pianist and singer, Diana Krall. The winner will receive $100,000, and each of the shortlisted finalists will receive $10,000.

The 2020 Giller jury is chaired by Mark Sakamoto, and includes fellow Canadian authors David Chariandy and Eden Robinson, as well as British critic and editor of the Culture segment of the Guardian, Claire Armitstead, and Canadian/British author and journalist, Tom Rachman. The jury selected the longlist and shortlist from 118 submitted books.

As well, Between the Pages: An Evening with the Scotiabank Giller Prize Finalists will take place digitally on November 2, at 7:30p.m. ET. Hosted by Jael Richardson, it will be an hour of readings, questions and answers, and will take you inside the minds and creative lives of the writers on the 2020 shortlist before the big announcement. Check out the Giller Prize website for full streaming information.