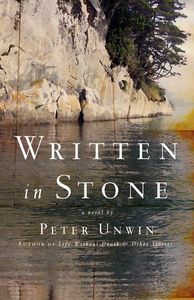 Peter Unwin's Written in Stone (Cormorant Books) follows Paul and Linda Prescot into the cold land north of Lake Superior, where Paul's obsessive study of Indigenous rock paintings becomes the central focus of both their lives until only one of them remains.

Unwin's rich depiction of the the ancient rock of the Canadian Shield and the unmappable vastness of the north will transport readers into the chilly and stark beauty of the landscape. A story of love, history, and the longing to find meaning and make sense of the world, Written in Stone turns an keen lens on settler impact, language, and storytelling. The paintings at its core come alive, not only as historical value but as knowledge that remains timeless and relevant today in a country grappling with deep inequity and the need for reconciliation.

We're excited to share an excerpt from Written in Stone, courtesy of Cormorant Books, with you today.

Her husband’s van stood in the driveway waiting for her. She’d always thought of it that way, his van, Paul’s van, a crepuscular Volkswagen Westfalia of hippy pedigree like him. Of late it was listing to the passenger side rather like her she thought and now it shipped water when it rained hard. The vehicle had always been entirely faithful to her. It took the metal key at once, even aggressively, the way a snapping turtle had taken a stick out of her hand years ago on a trail with Paul, demanding it, claiming it as its own. That’s my stick, she’d said, but she knew better than to fool with a snapper and gave it up.

Turning over the ignition she backed away from the house, out from under the church, with its shining new roof vaulting toward heaven, finally re-built now after the fire. Up the street on to the bridge above the Canadian Pacific train lines, turning off by the old industrial section where the Cadbury factory made the chocolate, past the baseball diamond and the high fencing where the multiple train lines ran off into a flickering haze of green and red signal lights, and beyond them to the Arctic, or so it felt like. From the factory the smell of melted chocolate poured in the windows. She steered down a close residential street glossy with recent rain, up Caledonia Avenue, forever it seemed, until the malls were reached, and coffee places, squat brutal buildings, warehouses the size of prisons, empty lots where trucks waited sulking in the dark shadows like bulls steaming from their dark and open nostrils.

Eventually she was out of the city and into an intermediate zone without men or women, no children at all, or even animals. Not even the darkest of birds tore the sky. Only vehicles and lights. By the time she reached the rock cuts and the pines, the rain had left a black skin on the highway and the odour of earthworms permeated the van. She glanced down at the dash and the Blaupunkt radio that had not worked in several years. Without thinking, she turned it on and was greeted at once by the cough of static and white hysteria. After several moments of that peculiar song she snapped it off, only to have the black knob come away in her fingers. Marvelous, she thought. Absently she reattached it to the metal spar while the incoming road filled the windshield, the road signs flying past her, as she read every one: a long habit established as a girl during the terse car rides of her childhood, her parents forever disputatious and fighting in the front seat, her in the back, alone, barricaded by books.

Soon came the waters of the Massaussaga River, the once-great sturgeon waters, the sloppy shore banks where swooped the mighty kingfisher, places that existed without corruption if only for the sound of their names, Wiikwemikong and Shining Tree. The French River, black and quiet, trundling forever west, briefly underneath her like a sullen crouching beast, then gone. So many had come and passed and returned on that river. Champlain, the old bird watcher. Brébeuf, who could make it rain, and other schoolroom names. Brûlé who was eaten. She knew so much of it, had read so much of it. It was her father’s fault. Him and his Dictionary of Canadian Biography. The man had given her an additional volume each year, sometimes two, with its yellow creamy covers and the red foxing on the pages like clusters of tiny veins. He had given her history. “It’s history” he said, and handed it to her. He told her that. “History. You can’t live without it,” he said smiling. She had them still. Every one. Her father, however, was gone. Everything real happened in those books. Only there. Nowhere else. Brûlé was boiled and eaten there. What a little prick he was. She imagined a hunk of his obscene body held to the lips like side dishes in a Greek restaurant on the Danforth. Maybe it tasted like chicken? Everything tasted like chicken, they said. Perhaps Paul. She wondered if her husband tasted like that. She wondered, not for the first time, what sort of a sick woman she was.

The river was gone, far behind her, and had been replaced by another, also gone. And another. Now every few miles the railway intersected the highway and the long trains slanted against the green land, rolling with dignity through the vast swamps from which rose a primal fog. Their black sooty sides showed graffiti brought back from the city blazing with purple swashes, weirdly angular, festooned with coloured and unfathomable tags. The painted language of urban tribes.

Land Of Whispering Pines, another insisted soothingly. But she didn’t believe it.

On her right side a donut place shone with neon signage, the parking lot crowded with cars like cows jostling at a salt lick. She spotted more than a few white surgical masks on the people getting into the cars or getting out. Fewer than before, she thought. People were taking their masks off. A few of them.

For the first time, she allowed herself to glance at the oblong tablet that vibrated on the passenger seat beside her; the dented, gold-coloured tin that once held a bottle of Aberlour twelve-year-old single malt scotch. She turned her eyes away from it immediately. Then the great rocks were directly on top of her, their veined and scarred faces painted with declarations of love. Eddie loves Liz always/99. Brand new, she realized, the paint still fresh and red. So many declarations of love had been written on those stone faces that flashed by the windows of a million cars. She didn’t want to see them. She didn’t want to look upon the passionate pictograms of the very young. She wasn’t passionate any longer. She wasn’t particularly young anymore, not in any way that mattered. She had no idea what she was, except that she was someone who didn’t want to be exposed to a foolish love that had no awareness of anything except its own selfish certainty. Jen and Dave, their union circled in a red woozy heart. Where were they now? Jen and Dave with their woozy red hearts? High up on a remote rock face she saw that someone had ungraciously painted I love Phat Chicks.”

Five minutes later, the writing that she knew was coming — the writing she had no desire to see — appeared in front of her. The words, the characters, that Paul had painted years ago with a can of red lacquer and a barbecue sauce applicator employed as a paintbrush. The rock was four billion years old. He had insisted on that. Four billion. As many years as there were loves. Paul loves Linda] he’d written in red and, then, appraising his work and her he said, “Paul loves Linda. Forever? Or for a while? You decide.”

He frowned at her and wrote forever.

This excerpt is taken from Written in Stone by Peter Unwin, copyright © 2020 by Peter Unwin. Published by Cormorant Books. Reprinted with permission.

Peter Unwin is the author of eight previous books, including his novel Searching for Petronius Totem, as well as many short stories, essays, and poems. His short story collection Life Without Death was shortlisted for the 2014 Trillium Book Award, and his poetry collection When We Were Old was a Relit Award finalist. He is currently completing a PhD in the Humanities at York University.

Paul Prescot’s desire to catalogue and comprehend the aboriginal rock paintings of the Canadian Shield is told through the eyes of the woman he loves, and who, for her own reasons, accompanies him on his travels to the deep north. Her journeys with her husband, and then alone, returning to the north shore of Lake Superior to commend his ashes to the water, draw her deeper into a history that, while foreign to them both, seems to offer a meaningful alternative to a world that has gone wrong.

Peter Unwin turns his unique talents to a story that lies at the heart of this country and to the crucial issue of our times. Written in Stone maps the exhilarating and ultimately tragic consequences of one man’s commitment to the land of his birth, a land whose deep and unwritten past is outside the reach of his understanding. Written in Stone goes beyond the surface acknowledgments of settler impacts, and exists on the border of two solitudes, where the known and unknown cannot be separated, where mythology and reality are one, and where an old and inaccessible knowledge holds the means to a possible reconciliation.