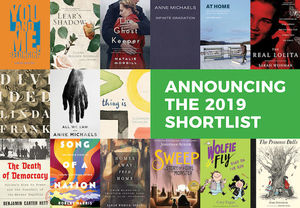 Vine Awards for Canadian Jewish Literature, a unique suite of literary prizes that celebrate Canadian Jewish literature across five different genres, announced their shortlists yesterday. The nominated books are honoured for their literary excellence in exploring Jewish themes or subjects.

The five winners, each of whom will receive $10,000 as part of their award, will be announced on October 23 at an Award Luncheon at the Windsor Arms Hotel in Toronto.

Fishbane praised the strength of the 2019 shortlists, saying they embody "the diversity of Canadian Jewish writing, characterized by the universal themes of home, family, and finding a place to belong. These authors dive deep into generational trauma, challenge popular historical narratives, and ask the difficult questions about not only what it means to be Jewish, but to be human."

The Koffler Centre of the Arts, which administers the Vine Awards, gratefully acknowledged donors Lillian and Norman Glowinsky for making the awards possible. Koffler Centre Executive Director, Karen Tisch said, "We are deeply grateful to our lead donors, Lillian and Norman Glowinsky, for supporting these awards... Their generosity provides vital support and recognition to writers exploring Jewish perspectives and themes within the context of broader Canadian narratives." The awards are named in honour of Lillian’s parents, Helen and Stan Vine.