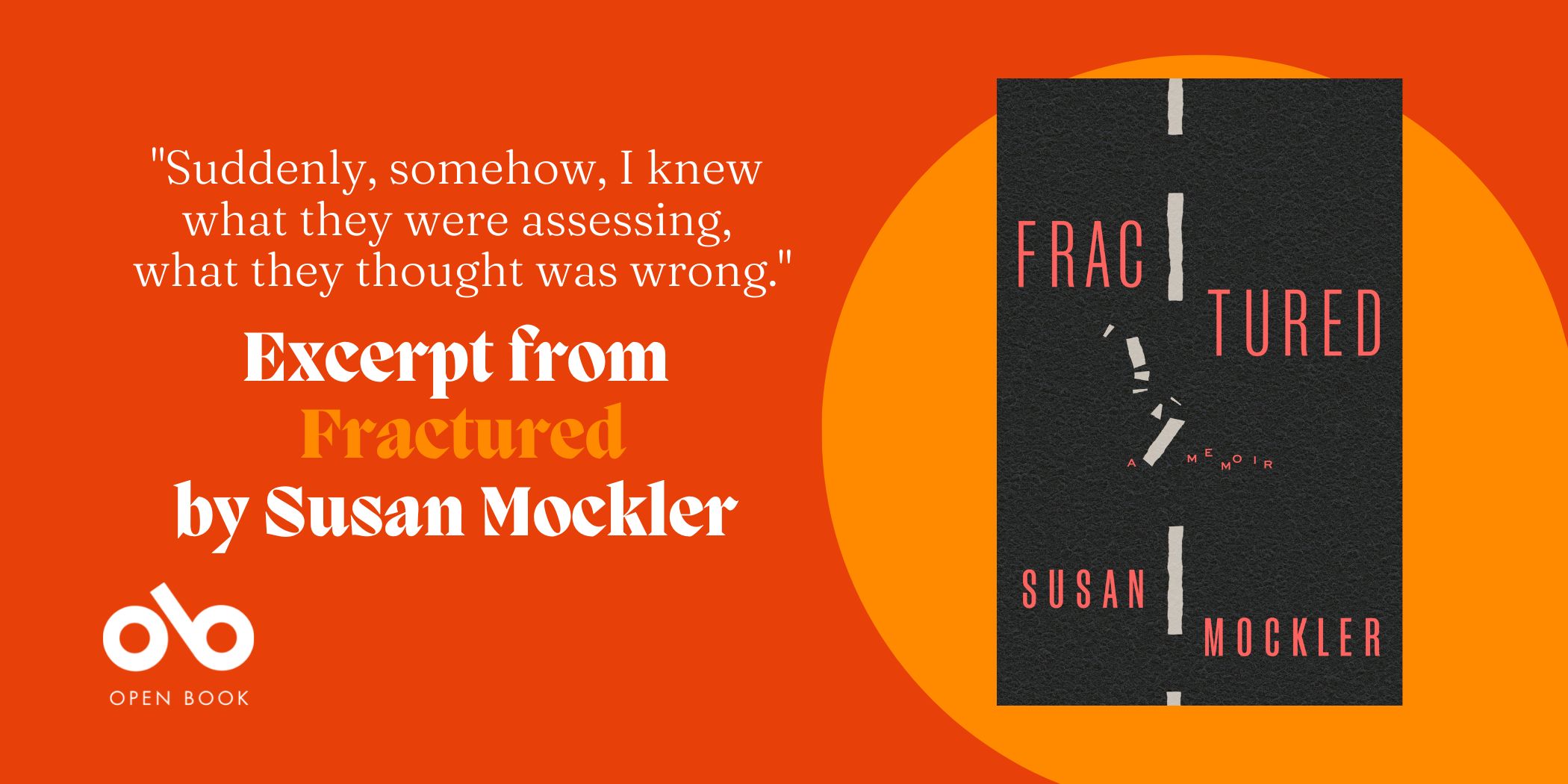 An instant can change a life. Psychotherapist Susan Mockler was heading to a mountain vacation when the car she was in struck a moose – a moment of impact that would alter her body, her relationships, her career, and her identity.

Her account of the accident and its aftermath—physical, mental, social, and emotional—is shared in Fractured: A Memoir (Second Story Press). Left with a spinal injury and a compromised ability to walk, Mockler embarked on a journey that shaped every single aspect of her life.

Fractured is not only a raw, powerful portrait of acquired disability and the exclusion and infantilization Mockler experienced, it's also a fluid, thoughtful literary excursion. Mockler's voice in this, her debut book, is crisp, wise, and evocative, as she describes not only pain and disorientation but relationships, tactile moments, and keen observations about the world both internal and external.

We're proud to share an excerpt from the opening of Fractured today, courtesy of Second Story Press, in which Mockler takes readers back to the fateful night of her accident and gives a glimpse into the otherworldly strangeness that followed those initials moments and days. 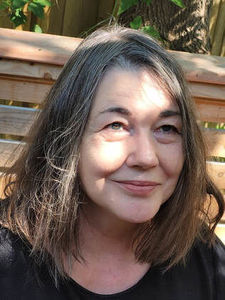 We decided to leave early. There was something about the sticky summer heat of the city, the restlessness I felt sitting on Gary’s mother’s couch, sipping decaffeinated tea, gray with milk, listening to Andy Rooney sign off on 60 Minutes, that made me want to flee.

“Let’s go tonight,” I said as we drove back to Gary’s. “Why wait until tomorrow morning?”

“Sure.” He shrugged. “Maybe we can get to Vermont by midnight. Stay over and be in North Conway tomorrow afternoon.” He reached around the gearshift and squeezed my thigh. “I like it when you’re spontaneous.”

His touch just below my cut-offs felt clammy, but I left his hand there and smiled. Impatient now for the cool mountain air, the stars silver against the clear night sky, I wanted this vacation. I needed this two-week escape from Ottawa, from my government job, and from the hollowness I’d felt since separating from Daniel almost two years ago.

Back at Gary’s, I lugged a cooler to the car. “I grabbed a bottle of Chardonnay. And some cheese and crackers for when we stop tonight.”

By nine o’clock, we were on the road, Eric Clapton singing “Tears in Heaven” on a portable tape player in the back seat. The stereo in Gary’s ten-year-old compact car had stopped working the week before, so I’d bought batteries, made tapes, and borrowed books on cassettes from the library. It was a long drive to the White Mountains. Eric Clapton was a compromise between our ages and musical tastes. I’d left some of Gary’s favorites on his bookcase; I couldn’t stand listening to “Hotel California” one more time.

“Do you want to stop for a coffee?” I asked after about an hour. “There’s a rest stop up ahead.”

“Let’s wait until we’re past Montreal.”

“I’ll see if I can find somewhere for us to stay tonight.” From the glove compartment, I pulled out a New England travel guide that I’d picked up a few days before. “Where do you think we’ll end up?”

“Hopefully around Saint Johnsbury. But you might want to check on the Quebec side. In case we want to stop sooner.”

I thumbed to the index, searching listings for Vermont. There was little light in the car, and I squinted to discern the names of hotels and motels near the border. And then sometime between struggling in the dimness to read, sometime in that span of time between feeling the thin paper between my fingers, the smooth vinyl of the seat against my bare legs, the effortless turning of pages, sometime in that space from conscious thought and action to my next memory, the car hit a moose.

From a distance, someone was calling my name. I wanted to reply, to rise to the surface to greet the voice. But there was resistance as if a magnetic force were drawing me deeper and deeper into darkness: a darkness safe, calm, and unending. How easy to let go, to simply slip away, but I struggled and one thought formed: Not ready to die.

I opened my eyes and returned to the world, trying to make sense of the chaos. Shouting, car doors slamming, flashing lights: red, blue, and bright white. The shape of a man hovering over me. Terrible. Something terrible has happened. I couldn’t feel anything. I couldn’t move. I was only mind. My body had disappeared.

Next, on an examining table, I gagged on something being forced down my throat. “Susan. Swallow,” a woman said. “We have to insert this tube into your stomach.”

Seconds? Minutes? Hours later? “Can we cut your clothes?”

“Yes.” My first word, raspy and faint. My throat raw from where the tube had scraped it. Then through the static of machines, the hum of voices, came the soft swish of shears.

I moved my eyes to locate him. There he was, off to one side, only a few feet away. I’d forgotten about him completely. All that seemed to exist was the flurry of action between my body and the doctors and nurses.

“You’re doing great, Susan.” It was the woman’s voice again. My life depended on the skill of these strangers whose shapes and movements I couldn’t bring into focus. “You’re very brave. Hang in there. You’re a brave girl.”

The ceiling tiles flashed by as they rushed me down the corridor. Just like an accident victim on TV.

“Your right lung is collapsed. But you can live with one lung. No problem.”

One lung. No problem. This murky new reality suspended between life and death, laid out on a table in an emergency room. This was me.

“We’re sending you to the hospital in Ottawa by ambulance.” The woman again. She must be the doctor, the one in charge. “They’ve called in the neurosurgeon. He should be there by the time you arrive. You’ll be in good hands.”

By ambulance? Back on the highway where this happened? Weren’t there airlifts? But I didn’t protest. Other people were making decisions for me now.

They packaged me up to be transported, to haul me back to Ottawa like a carcass; a slab of meat. As they loaded me into the ambulance, I overheard Gary arguing with one of the paramedics. They were refusing to let him accompany me.

“How am I supposed to get home?” Gary shouted.

“You’re going to have to find your own way back, sir.” The paramedic banged the rear doors and shut me in.

“He said he’d be here by three. His resident called him about an hour ago.”

A different voice. I was somewhere else. Ottawa. I must be in Ottawa now. The room was diffusely lit. Two, no, three figures bustled around. I struggled to interpret shards of conversation. “Steroid drip…. O2 levels…. BP…. Catheter….” Impossible to assemble meaning from these fragments.

“Mmm.” Too much effort to speak.

“They’re taking you down for an MRI.”

Another room, this one flooded by light. The flash of a white lab coat beside me.

“Susan.” A man’s voice, authoritative and calm. “I’m Dr. Chamberlain. You’re going to have an MRI now. Just close your eyes in there. That way it’ll be over in no time.”

They shifted me onto a table. I squeezed my eyes tight, then heard a mechanical whirr. And suddenly, somehow, I knew what they were assessing, what they thought was wrong.

I blinked my eyes open. I was back on the stretcher.

“Susan? Do you hear me?” the doctor spoke.

Alert. I needed to stay alert. This was important. “Yes,” I whispered. My breath was weak.

“The injury is incomplete. The spinal cord isn’t severed. And we don’t have to operate. The fractures have decompressed.”

Not severed. No operation. Good news. Incredibly, there was good news.

Susan Mockler is a disabled writer living in Kingston, Ontario. Her stories and essays have been published in Canada and the U.S. including work in Voices From the FOLD: A Festival Magazine, Flash Fiction Magazine, 2020 Editor's Choice Award Winner, THIS Magazine, Geist, Descant, Ars Medica, and Taddle Creek. Susan has attended writing residencies in Ireland Spain, the U.S., and Canada, and has received grants from the Ontario Arts Council and the Toronto Arts Council to support her writing. Fractured: A Memoir is her first book.

“Somehow it was easier to be inside the injury. Not to see what was visible on the outside. I knew I was still here.”

A collision with a moose on a dark highway left Susan Mockler with an incomplete spinal injury, suddenly compromising her ability to walk and to care for herself. She spent months in a rehabilitation facility learning how to adjust to her new reality, and though her body partially recovered, every aspect of her life changed.

Fractured is a compelling illumination of the challenges of acquired disability and the ways in which people with disabilities are sidelined and infantilized. Mockler, a psychotherapist, speaks with frank honesty about her family and friends’ reactions to her injury, and the hard-won lessons that she and those around her learned from her experience.