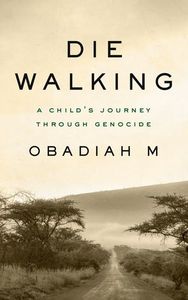 Die Walking: A Child's Journey Through Genocide (House of Anansi Press) by Obadiah M. tells the story of the Rwandan genocide through the perspective of one incredibly brave man who experienced its horrors as a child.

Obadiah M. is a pseudonym, adopted to protect the writer and his family for retaliation against his sharing the truth of his experiences. He was a 13-year old pastor's son when his uncle appeared at his home one day. Obadiah didn't quite understand the scope of what was happening as his family feverishly prepared to flee. Then they were gone from the only place he'd ever known, on the run through a whirl of gunfire, unspeakable violence, and hunger.

It's an unimaginable situation for anyone, and most of all for a child. Obadiah's raw account of what he lived through both in Rwanda and later, in the American refugee detention system, is chilling, and includes information not often found in discussions of the period's history.

He shares as well how he was sustained in unbearable times by his faith in Ubuntu, a philosophy often summarized with the maxim "I am because we are".

Drawing comparisons to seminal Holocaust text, Night by Elie Wisel, Obadiah's story is an essential artifact of one of the most brutal periods of violence during the 20th Century.

Today we are proud to share the foreword from Die Walking, written by Globe and Mail Africa Bureau Chief Geoffrey York, in which he introduces Obadiah's experiences and why the author needs anonymity in order to share his story.

Excerpt from Die Walking: A Child's Journey Through Genocide by Obadiah M.:

History is written by the victors. And in the aftermath of one of the last century’s greatest tragedies​ — ​the horrific wars and mass killings of Africa’s Great Lakes region in which millions of innocent people perished— ​the official histories are still largely told from the perspective of the winner: the long-ruling Rwandan president, Paul Kagame, who rose to power during the genocide of 1994. But the voices of the forgotten are never silenced completely. This book is an extraordinary account of resilience and courage among the Rwandan refugees who suffered innumerable atrocities in the years after the genocide— ​one of history’s most neglected peoples.

Obadiah’s story is a child’s-eye view of the First Congo War, one of the least-documented conflicts of the twentieth century in one of the poorest corners of the world. It’s a story of terror and hunger, massacres and cruelty, during an incredible exodus in which death was so routine that it was scarcely remarked upon, where bodies were simply dragged into the forest and abandoned. But it is also a story of generosity and gentleness among those who endured the worst. It tells us that history is far more complex than the popular stories of rulers and regimes, victors and vanquished, authorized memorials and official myths.

The terrible events of the mid-1990s had their roots in a much earlier refugee exodus. Hundreds of thousands of Tutsis had fled from Rwanda after the anti-Tutsi pogroms that erupted in 1959 and continued through the early 1960s as Hutus won control of the first post-colonial government. The divide between the majority Hutus and the minority Tutsis had been sharpened for decades by the Belgian colonial authorities, who formalized the ethnic differences in ID cards and classroom propaganda. The Belgians had initially propped up a Tutsi elite to rule Rwanda but later switched sides and helped install a Hutu regime in the early 1960s when the country became independent. The largest number of the Tutsi refugees fled to Uganda, where they joined thousands of Rwandan migrants who had arrived there in earlier decades. By the 1970s and 1980s, there were growing cross-border tensions as the exiles dreamed of a return to their homeland. Some gained valuable fighting experience in Uganda’s guerrilla wars and as part of the Ugandan army, while the Rwandan government resisted their right of return. In 1987, exiled activists in Uganda formed the Rwandan Patriotic Front (RPF), a Tutsi-dominated organization that became increasingly militarized, with Paul Kagame its eventual commander. Three years later, thousands of RPF troops crossed the border into northern Rwanda, igniting a war that raged for nearly four years and culminated in the genocide that killed an estimated 800,000 people. The genocide has often been portrayed, in popular Western accounts, as an episode of pure ethnic hatred somehow unique to Africa— ​an inexplicable and irrational “tribal” slaughter.

But atrocities cannot be understood without their political and military context, and the genocide cannot be separated entirely from the cycles of killing and reprisals that had escalated when the RPF soldiers entered Rwanda. Relations between Tutsis and Hutus had been increasingly toxic since the early 1960s, exacerbated by exile, dispossession, and the mass killings inflicted on Hutus in neighboring Burundi. The conflict became dramatically more lethal during the RPF military offensive in the early 1990s, as both sides launched violent attacks and used the hate propaganda of their own radio stations to fuel ethnic grievance. Thousands of young Hutus joined extremist militias. Revenge killings grew worse. And the RPF’s brutal tactics during its offensive, including the massacre of Hutu civilians in northern Rwanda, contributed to the atmosphere of fear and paranoia that led to the genocide, in which Hutu militias spearheaded the killing. The genocide was triggered by the shooting down of a French-crewed jet near the Kigali airport on the night of April 6, 1994. On board the small plane were the presidents of Rwanda and Burundi, who were returning from a summit in Dar es Salaam. The plane was hit by a surface-to-air missile, killing everyone on board.

The plane shootdown is still one of the great mysteries of the twentieth century. But while the Paul Kagame government has always blamed it on Hutu extremists, there is mounting evidence that the missile was fired by Kagame’s own RPF forces, eager to sabotage a power-sharing agreement with the government so they could complete their military victory on the ground. Several of Kagame’s former aides have given accounts of his role in orchestrating the shootdown. The missile launcher itself has been traced back to the Ugandan military, the main supplier of military hardware to the RPF rebels.

Within hours of the jet’s shootdown, Hutu militias launched a brutal slaughter of Tutsi civilians. The orgy of bloodshed continued for three months. The story has been told and retold for decades in books and movies. Neighbour killed neighbour. Bodies were thrown into latrines or mass graves. Hundreds of thousands of Tutsis were murdered: shot at militia roadblocks or hacked to death with machetes. Many who took shelter in churches were massacred with grenades or bulldozed alive inside the buildings. In the first week alone, tens of thousands were killed, and the slaughter continued until July. At the end of the genocide, after the RPF had captured the country, many Hutus took shelter in temporary camps within Rwanda. But a larger number— ​a total of about 2.1 million Rwandans— rushed for safety across the border in Tanzania, Burundi, or the Democratic Republic of Congo (known then as Zaire). It was one of the biggest and swiftest exoduses in world history.

Many of the refugees were former government officials, Hutu soldiers, and perpetrators of the genocide. But a huge number of them​ — ​like Obadiah and his family​ — ​were ordinary civilians, including women and children, who had no involvement in the killings. Many of the camps in Zaire soon became militarized, controlled by soldiers of the former Hutu-dominated regime who mobilized recruits in the camps and trained them for attacks on the new Rwandan regime. They discouraged the refugees from returning to Rwanda. But the refugees’ decision to stay in Zaire was understandable: they had genuine reason to fear for their lives if they returned to their homeland. As the RPF seized control of Rwanda in 1994, it was massacring thousands of Hutu civilians across the country. These were not just spontaneous revenge attacks, but highly organized and systematic killings, clearly ordered from above. In one of the most comprehensive documentations, a team of United Nations researchers led by American consultant Robert Gersony estimated in 1994 that the RPF had killed about 30,000 Hutu civilians in the final two months and immediate aftermath of the genocide.

This conclusion was based on a detailed study, including hundreds of interviews across Rwanda. A common RPF tactics was to visit a village and invite the Hutus to gather for a “peace and reconciliation” meeting. The RPF soldiers, usually drawn from zealous “kill units,” would simply open fire and slaughter everyone in the gathering. In another example, in April 1995, thousands of Hutus were massacred by RPF soldiers who had surrounded the Kibeho camp, the largest for internally displaced people in Rwanda. The soldiers killed the Hutus indiscriminately, using machine guns, rocket-propelled grenades, and machetes, while UN peacekeepers watched in horror. Many of the dead were women, children, and other ordinary Hutu civilians. An estimated 4,000 to 8,000 were killed in a single day of carnage.

Finally came the event that Obadiah documents in this book: the Rwandan invasion of Zaire in October 1996, which targeted the Hutu refugee camps. About 800,000 refugees were quickly forced to return to Rwanda. But others refused. Many walked northward, hoping to cross borders to find haven in a neighboring country. They were pursued by Paul Kagame’s forces, shooting and killing. A report by the UN, known as the Mapping Report, was eventually issued in 2010. It documented a systematic pattern: hundreds of deadly attacks on Hutu refugees by the RPF and its Congolese allies in the 1990s killing tens of thousands of Hutus. Most of the victims, it found, were children, women, the elderly, and the sick, “who were often undernourished and posed no threat to the attacking forces.” Some of Obadiah’s family members were among them. The UN report raised the possibility that these mass killings could be considered crimes of genocide. It’s a question that still haunts Rwanda and Congo today​ — ​never properly investigated or answered because of the powerful opposition from Kagame and his allies.

The Democratic Republic of the Congo’s famed Nobel Peace Prize laureate, Dr. Denis Mukwege, has repeatedly called for an international tribunal to pursue the findings of the UN Mapping Report and investigate the suspected war criminals who orchestrated the mass killings in Congo. Support for his call has steadily increased for years. Even a quarter century later, human justice still demands it.

Obadiah M. is the pseudonym of a Rwandan author living in East Africa. He writes anonymously to protect himself and his family from those who would prevent him from sharing his story.

In the spirit of Night by Elie Wisel, Die Walking is the memoir of a Rwandan boy escaping genocide.

In 1994, Obadiah was the thirteen-year-old son of a Hutu pastor who dreamt of becoming a pilot when he heard something was wrong in Kigali, Rwanda. He didn’t understand the politics, but an uncle appeared, a family meeting was held, then they were fleeing genocide. They were under gunfire, soldiers in pursuit. Everywhere were bodies, hunger, that smell. Stalked by terror, Obadiah kept moving through unrelenting danger and the darkest despair. He was sustained by faith and the philosophy of Ubuntu — finding one’s self through others. But not even escape led to safety, as Obadiah had to face the American refugee detention system. Die Walking is one boy’s horrific story of shared humanity in a chaotic world.