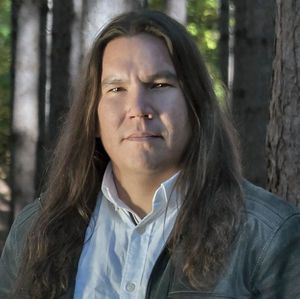 Waubgeshig Rice's hotly anticipated second novel, Moon of the Crusted Snow (ECW Press), plunges the reader into a small northern Anishinaabe community suddenly cut off from the outside world. Panic and chaos loom as the community begins to buckle under the strain of dwindling food supplies, sickness, and lack of power. When strangers begin to arrive from the south with their own mysterious and manipulative agendas, tension explodes into crisis.

In the midst of it all, one group of young people look to the land and their Anishinaabe tradition for answers. Pressed on every side, they find guidance in the past, even as they struggle with a decision that will effect all of their futures.

We are beyond excited to announce that Waubgeshig will be joining the Open Book crew for October 2018 as our writer-in-residence. That means you'll have a chance to read his insightful, powerful, witty voice on our site all month long!

With October just around the corner, we're kicking things off talking to Waub today about the unforgettable characters in Moon of the Crusted Snow, especially Evan Whitesky.

He tells us about how he shares a name with his character, writing lessons he's learned from his career in broadcast journalism, and the lengths he'll go to in order to fully know and understand his characters.

Evan Whitesky is an Anishinaabe man in his mid-20s who lives in a distant northern Ontario First Nation. He and his partner Nicole have two young children: a son named Maiingan and a daughter named Nangohns. He works for his community’s public works department as a general labourer. He grew up on the land learning how to hunt, fish, and live in the bush. He’s very much a rez everyman. There’s nothing particularly remarkable about his life. He just wants to be a good partner and dad and make sure everyone around him has what they need. He’s slowly learning more about his Anishinaabe language, culture, and ceremonies - elements that had been brutally stripped from most of his community due to residential schools and the other impacts of settler colonialism. But it’s his connection to the land that ends up proving vital to his and his community’s survival as the story unfolds.

Generally I choose names very arbitrarily. Some of them are nods to real life people, though. Sometimes I’ll take Anishinaabemowin words and translate them. “Whitesky” is my first name, Waubgeshig, translated directly to English. He’s not based on me in any way, though. It’s just what I picked for him and his family. I honestly don’t put too much thought into the names of secondary characters, though. Their traits and actions come first, and their names second.

I’ve generally gone back and forth when writing short stories, but right now I’m more drawn to writing in the third person. It’s a fun way to develop an external voice with intriguing characteristics that’s a safe distance from me personally. When I write in the first person people close to me often say they read that character with my voice in their head and will draw parallels to myself, but the truth is I’ve never really based a first person character fully on my own experiences. So that’s a concern I’ve had over the years. To me, the third person point of view is an enjoyable exercise in combining different elements of personality and humanity into something that can hopefully connect with readers.

Because my day job is as a journalist and radio host, I’m basically in the business of dialogue, so I have the fortune of being able to listen to all kinds of conversations on a daily basis. Listening to and being a part of different kinds of discussion have influenced my writing in a pretty profound way in that I can draw from a wide array of real-life dialogue for inspiration. It’s not that I lift actual words and exchanges from things I’ve encountered in real life; I’ve just been able to better understand how people communicate with one another because of my journalism work. Also, when writing for broadcast journalism, we’re trained to keep it “conversational”, and I’ve adapted that to my literary work as well. I generally keep dialogue pretty straightforward and simple in that sense. So my advice to aspiring writers would be to listen closely and observe how people engage in dialogue. There are so many different intriguing exchanges to witness on a daily basis that could enrich your stories.

I know my characters very intimately. I write as fulsome character profiles as possible before I even start writing the story. Even if some of those details don’t make it into the story, it’s important for me to know as much about them as I can. It helps me picture them in certain situations and understand how they’d respond. I try to imagine what their favourite songs, food, etc. are so I feel like I know them personally. When those minor details do arise in the prose, they can help the reader connect and maybe even empathize. Plus, these character sketches are fun exercises.

I read Ralph Ellison’s Invisible Man shortly after I first moved from the rez to the big city for school, and the unnamed narrator in that story has really stuck with me ever since. The Judge in Cormac McCarthy’s Blood Meridian haunts me to this day, and partially inspired the antagonist Justin Scott in Moon of the Crusted Snow.

I’m nearly finished what I hope will be a collection of short stories about being young and “mixed blood” - coming from parents who are Indigenous and non-Indigenous. There are some unique experiences connected to growing up with a combined heritage, and I’ve always wanted to explore that in fiction. My dad is Anishinaabe and my mom is a white Canadian, so some of the themes in the stories are inspired by my own upbringing and the experiences of some of my cousins and friends who are also mixed. I just have a couple more stories to write and I think I’ll have enough for a book.
__________________________________________

Waubgeshig Rice is an author and journalist originally from Wasauksing First Nation. His first short story collection, Midnight Sweatlodge, was inspired by his experiences growing up in an Anishinaabe community, and won an Independent Publishers Book Award in 2012. His debut novel, Legacy, followed in 2014. He currently works as a multi-platform journalist for CBC in Sudbury. In 2014, he received the Anishinabek Nation’s Debwewin Citation for excellence in First Nation Storytelling. Waubgeshig now splits his time between Sudbury and Wasauksing.

A daring post-apocalyptic novel from a powerful rising literary voice

The community leadearship loses its grip on power as the visitors manipulate the tired and hungry to take control of the reserve. Tensions rise and, as the months pass, so does the death toll due to sickness and despair. Frustrated by the building chaos, a group of young friends and their families turn to the land and Anishinaabe tradition in hopes of helping their community thrive again. Guided through the chaos by an unlikely leader named Evan Whitesky, they endeavor to restore order while grappling with a grave decision.