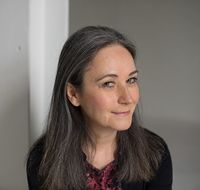 So much has been said - or rather, raved - about Elise Levine's fiction that an introduction to her writing could nearly be a book in itself. To pick just a few: NOW Magazine called her "A cutting-edge literary sensation", the Toronto Star dubbed her "A dazzling wordsmith", and the Globe and Mail praised her as "Bold and startling... precipitous and exhilarating".

The writer who inspired those accolades is back this season with a new collection of short fiction, the aptly titled This Wicked Tongue (Biblioasis). Wonderfully dark, eerily atmospheric, and perfectly Levine-esque, the stories are sharp, smart, thoughtful, and rendered in Levine's customary powerhouse prose.

We're very excited to welcome Elise to Open Book to talk about This Wicked Tongue as part of the Keep it Short short story interview. She tells us about what the stories in the collection have in common with each other, tells us where she is stylistically "foot on the gas", and gives a downright beautiful answer to what she loves about writing short fiction.

The stories in This Wicked Tongue bonded with each other over a period of fourteen years, parallel to the time I spent working on my 2017 novel Blue Field. When I wrote the oldest stories in the collection — “Money’s Honey” and “The Riddles of Aramaic”, both of which I revised in the later stages of putting together the book — I was interested in women living subversively on the edges of organized religion and the mechanisms of power.

In writing the most recent stories — “The Association”, “As Such”, “Alice In the Field”, “This Wicked Tongue” — my sense of the book overall grew stronger, and helped guide my sense of the shape of the characters’ inner lives around the role of the sublime, of mystery — the strange and the estranging — and how these intersect with the desire to cut free from the expectations of the past. Overall the process was very organic.

The stories feature characters who set forth, for better or for worse, abandoning places and versions of themselves. They bring into focus questions. What news might these latter-day prophets return bearing? What might they tell of what they’ve witnessed, who they’ve become? Or might become.

Some of the stories are explicitly linked. “The Association” and “As Such feature the same protagonist, Martin, as an unhappy kid and as a mostly happy but at times still-struggling adult. The title story and “Alice In the Field” share a protagonist named Alice, who in a somewhat fantastical bent might be the same or similar woman, if they weren’t separated by centuries and circumstances.

The stories in This Wicked Tongue also share my approach to style and form. I foreground the language and voice, and the shape. I’m foot on the gas when it comes to compression, lyricism, the strange, defamiliarization. The characters — encountering change, finding themselves in moments of extreme porousness or bullishness, confronting external or their own internal orthodoxies — face the disorienting mysteries of themselves and the worlds they inhabit and intuit, and my job is to try to bring readers along for the ride. Without losing them!

The story “This Wicked Tongue” is about an increasingly apostate medieval anchoress. In mourning for her female lover who has been murdered, scapegoated by people fearing the plague, and wanting to honour her lover’s religious beliefs, she takes up the vows of retreat. But having witnessed the murder, the anchoress experiences a post-traumatic stress response that reduces her ability to speak anything but a fractured and allusive language — one that she feels also enables her to speak directly to God. Who she increasingly calls out and challenges. The story captures the book’s concern with polyglot states of freedom and experiences of power. And it gets at my collection-wide use of pressured language to help reflect the states of mind of characters stepping out of bounds.

I love how short fiction’s DNA embodies the broken or cut off. Short stories suggest the anti-paradise, the jagged, our own fragility and ultimate mortality. The form’s compression also renders it both load-bearing and spring-loaded, perfectly poised to bound off and encounter — and report on — the imperfect and entirely remarkable world.

What’s tough for me about writing short fiction is what’s challenging in writing long-form fiction too. I write slowly, revising a ton over about a million drafts. I wish I were faster!

I love the linguistic and formal energy — and deep empathy — of these books, the way they push at language and structure to get at personhoods. Some of the collections break with the constraints of realism to embrace the surreal, the fairy tale, the strange. What I learned to cherish from them is a sense of wonder: what’s not possible with the short story?

Elise Levine is the author of the novels Blue Field and Request and Dedications, and the story collections Driving Men Mad and This Wicked Tongue. Her work has also appeared in Ploughshares, The Gettysburg Review, The Collagist, Blackbird, Best Canadian Stories, and the Journey Prize Anthology, among other publications, and has been named a finalist for Best Small Fictions 2018. She is the recipient of a Canadian National Magazine Award for fiction; awards from the Canada Council for the Arts, the Ontario Arts Council, and the Toronto Arts Council; and residency fellowships from Yaddo, the MacDowell Colony, and the Ucross Foundation, among others. She lives in Baltimore, MD.

In the dark and eerie style of Joy Williams and Karen Russell, this character-driven collection from Elise Levine is tough and tender, filled with complicated people longing for independence from the scripts of the past. From a sniping road-tripping couple in the desert to a cantankerous divinity-school candidate on the prairies to a frustrated cop in a cave in the south of France, This Wicked Tongue showcases the gritty and the sublime.