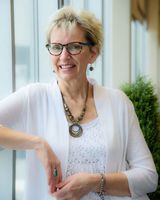 Moving with family to an idyllic farmhouse sounds like a charming idea, but in practice, behind the scenes, Ellie and Eric Nyland's family is unravelling.

Fran Kimmel's No Good Asking (ECW Press) opens with the couple setting up in Eric's childhood home with their two sons in tow, but the change of scene isn't the fix they'd hoped for. Until one day, when Eric finds Hannah, a neighbourhood girl, wandering in the cold. When they take Hannah in, the change they've been longing for has finally arrived - but soon it seems the child who has brought them all back together might be taken from them.

A book about loss, healing, trauma, and connection, No Good Asking has been called "quietly powerful", "honest", and "an achingly good story". We're excited to welcome Fran to Open Book today to talk about her raw and arresting characters and their story as part of our In Character series.

She tells us about No Good Asking's oldest son Daniel finding his place in the world and the family, shares her tips and tricks for writing great dialogue, and reveals the actress she would most love to see play Ellie Nyland.

No Good Asking has multiple main characters. While I care for them all in equal measure, I’m happy to tell you about Daniel, the oldest son in the Nyland family. In many ways, Daniel is a typical fourteen-year-old, experiencing all the turmoil and uncertainty of adolescence. But he also has the added complication of feeling pushed to the side while his younger brother Sammy sucks up all the Nylands' oxygen. He’s a good kid with a dry sense of humour who says things like, “In case you’re having a stroke or something, I’d like to point out that we’re not moving,” when his dad stops the car. Even when he makes hare-brained decisions, like stealing and then cracking up his grandpa’s truck, his intentions are honourable. There’s a tremendous goodness and sensitivity within Daniel that helps him find his way.

Up until this novel, I’ve written every one of my stories in first person. If I’m being honest, I feel ill equipped to build a character in any other way. I need to be deep inside my characters’ hearts and minds, seeing their worlds from within their skin. For this novel I’ve chosen close third-person—a first for me—alternating between the perspectives of the five main characters. This family is fractured, experiencing their lives along different tracts, so very early in the writing process I realized I had to give voice to them all. So much of what they think and feel is left unsaid. I knew I wouldn’t be able to create the right emotional map unless I captured all their points of view from the inside out. Hopefully I don’t make anyone seasick by shifting perspectives so often.

I typically write straight dialogue first, trying to focus on conflict, either internal or external. In my first drafts, I leave out tags and description, and then build the scene around the dialogue, concentrating on what is meant rather than what actual words the characters choose to say to each other. Dialogue is so tricky and doesn’t come naturally for me, so I give it as much focus as I can; reading out loud, loosening up their words, stripping away all the gibberish. I try to remind myself that dialogue must count. It can’t just be conversation but has to move the story forward in some way. In terms of tips, I suggest caution around overusing proper names. "I managed to get the bills paid, Nathan." "I said I’d take care of it, Sally." Don’t do that.

Ellie Nyland is the mom in the family and is struggling with depression because of things that have happened in her family’s past. She and I are alike in that we’re both such private people who care deeply for our children. Ellie can be edgy and self-absorbed and difficult to be around, and while I wouldn’t describe myself that way, I’ve been through dark patches too. What I’ve learned in both fiction and in real life is that we can be so well loved even during those times when we’re not particularly loveable.

I would choose Reese Witherspoon to play Ellie. (If you could get her on board I’d be really grateful!) I have long been a fan of Reese’s acting, and her book club, and I really loved her work as Madeline in the HBO series Big Little Lies, based on the novel by Liane Moriarty. Reese plays the role of an emotionally troubled woman to perfection, allowing both her character’s strengths and vulnerabilities to shine through. I think she’d be a great match for Ellie’s sharp-tongued surges and softer moments.

Nearly every week I meet a new character who has a quirky tic or a way of speaking that jumps off the page and sticks to me. But for characters that have stuck to me the longest, I would have to include the beautifully complex and decent Jack, from Frederick Busch’s novel entitled Girls, as well as the marvellous Miss Marsalles, the elderly piano teacher from Alice Munro’s short story entitled "Dance of the Happy Shades."

I’m working on a new novel about a young man whose life takes a sharp turn when he learns he has a 14-year-old son whose grandma can no longer look after him. Railroaded into fatherhood, he takes in the grudging boy and carts the grandma off to the nearby dementia ward, which has been hit with a recent rash of unexpected deaths and thefts. This book hits close to home for me. My mom also has dementia and lives in a memory care cottage, and while her surroundings could not be more different from those in this novel, dementia plays mightily in both my worlds, real and fictional.

Fran Kimmel is the author of The Shore Girl, which was named a CBC Top-40 Book and won the Alberta Readers’ Choice Award in 2013. Fran’s short stories have appeared in literary journals from coast to coast and have twice been selected for The Journey Prize Stories anthology. Born and raised in Calgary, Fran now writes and teaches in Lacombe, AB.

A profoundly moving exploration of our capacity to heal one another.

Ellie and Eric Nyland have moved their two sons back to Eric’s childhood farmhouse, hoping for a fresh start. But there’s no denying it, their family is falling apart, each one of them isolated by private sorrows, stresses, and missed signals. With every passing day, Ellie’s hopes are buried deeper in the harsh winter snows.

When Eric finds Hannah Finch, the girl across the road, wandering alone in the bitter cold, his rusty police instincts kick in, and he soon discovers there are bad things happening in the girl’s house. With nowhere else to send her, the Nylands reluctantly agree to let Hannah stay with them until she can find a new home after the Christmas holidays. But Hannah proves to be more balm than burden, and the Nylands discover that the only thing harder than taking Hannah in may be letting her go.