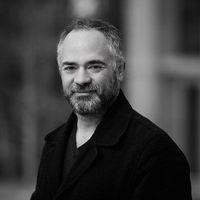 Over the past twenty years, Marcello Di Cintio has built a career as one of Canada's most insightful and incisive nonfiction authors, earning prizes along the way that include the Writers' Trust Shaughnessy Cohen Prize for Political Writing and the W. O. Mitchell City of Calgary Book Prize, as well as nominations for the Taylor Prize for Nonfiction and the British Columbia National Award for Non-Fiction.

His style, both brainy and accessible, which often focuses on the experiences of ordinary people in extraordinary circumstances, has never been more compelling than in his newest book, Driven: The Secret Lives of Taxi Drivers (Biblioasis). For the project, Di Cintio interviewed numerous taxi drivers across North American with backgrounds as diverse as former members of both the Iraqi National Guard and Westboro Baptist Church.

An exploration of the liminal space that is a taxi trip, Di Cintio teases out the paradox of intimacy and distance that binds drivers and an endless stream of diverse passengers, with all the complex interpersonal, social, and power dynamics each interaction contains. With taxis serving as a microcosm of our current social and political systems, Di Cintio creates something fascinating in these pages that is both personal and universal.

We're thrilled to welcome him to Open Book today to talk about Driven as part of our True Story nonfiction interview series. He tells us about how his previous travel narratives led him to this close-to-home project, proposes a much better name for the genre known (so strangely broadly) as "nonfiction", and tells us what he's enjoying about the "post-publication hangover stage".

All my previous books involved plenty of foreign travel. I usually jet off to faraway places in search of stories. I started to wonder, though, what I was missing here at home. What wasn’t I hearing? No doubt I could find as compelling stories in the taxi rides to and from the airport as I could in the distant countries I traveled to. What was behind those eyes I saw reflected in the rear-view mirror?

Unlike my previous books, a central question did not fuel the narrative other than, I suppose, “who are the men and women who drive us around?” I was more clear about what I wasn’t looking for. I didn’t want to find clichéd “taxi noir” tales about sex, drugs, and backseat shenanigans. We already know those stories, or at least we can imagine them.

And I wasn’t interested in the archetype of what I call the “cabbie cardiologist” – the professionally trained scholar from far away who moves to Canada and finds his credentials are not recognized. Instead of performing surgeries or working at a pharmacy, he gets stuck driving cab. Again, we’ve heard these stories before. They are something of an urban myth in all big cities.

Instead, I wanted to be surprised. I wanted to hear unexpected stories. And the drivers I met certainly delivered.

I love being constantly reminded that the world is full of amazing characters with incredible lives – that we are always surrounded by epic tales. And I love that being a nonfiction write allows me a backstage pass into the lives of amazing strangers. This is such an incredible gift.

Great nonfiction proves to the reader that all lives have a narrative value, and that no one is truly alone.

No hyphen, though I dislike the term altogether as it defines the genre by what it is not. I prefer “narrative journalism” or, especially, “documentary literature.”

I constantly feel discouraged during the writing process, especially during the first draft stage which I absolutely despise. I don’t think this is a “block,” but more of an intimidation of the blank page (or screen). The only cure for this is for me to simply write through the anxiety and constantly remind myself that the first draft will be garbage that nobody has to see.

When I am writing a book, all I want to do is write magazine stories. And when I am writing magazine stories, all I want to do is write a book. Right now, in that post-publication hangover stage, I am working on several different magazine pieces. After spending two or more years on a single project, I like the feeling of getting obsessed with a topic for a month or two, then putting it aside.

Marcello Di Cintio is the author of four books, including Walls: Travels Along the Barricades and Pay No Heed to the Rockets: Palestine in the Present Tense, both winners of the W. O. Mitchell City of Calgary Book Prize. His magazine writing has appeared in appeared in publications such as The International New York Times, The Walrus, Canadian Geographic, and Afar. Di Cintio has served as a writer-in-residence at the Calgary Public Library, the University of Calgary, and the Palestine Writing Workshop, and he teaches nonfiction writing at the annual WordsWorth youth writing residency.

In conversations with drivers ranging from veterans of foreign wars to Indigenous women protecting one another, Di Cintio explores the borderland of the North American taxi.

“A taxi,” writes Marcello Di Cintio, “is a border.” Under the familiar roof light of every cab is a space both private and public: accessible to all, and yet, once the doors close, strangely intimate—a space in which two strangers who might otherwise never have met share a five or fifty minute trip. Quotidian themselves, taxis transcend everyday barriers between the wealthy and the working class, white people and people of colour, those who give direction and those who follow, those who speak and those who listen—and yet, though driver and fare are close enough to reach out and touch one another, most trips are characterized by complete silence. In a series of interviews with North American taxi drivers, their backgrounds ranging from the Iraqi National Guard, to the Westboro Baptist Church, to an arranged marriage that left one woman stranded in a foreign country, Marcello Di Cintio seeks out those missed conversations, revealing the untold lives of the people who take us where we want to go.