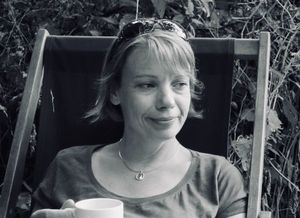 Have you ever wondered what that strip at the edge of the highway is called - the one that divides the road from the land, often filled with wildflowers and milkweed? It's a wayside, and the term makes a symbolic - and appropriate - appearance in the title of Jenny Haysom's arresting debut collection of poetry, Dividing the Wayside (Palimpsest Press).

Like the wayside of the highway, Haysom delves into the "in between"s of our lives, the coexistences both comfortable and uncomfortable, mining our contrasts and complements for wisdom and wry insight. It's an assured debut packed with poems of depth, musicality, and passion.

We're excited to welcome Jenny to Open Book to tell us about her poetic journey through our Poets in Profile interview. She tells us about the importance of isolation in her past and process, the delight of early encounters with terrifying nursery rhymes, and why the ending has the upper hand.

Rather than citing a specific incident, I would have to say that my general experience of isolation growing up in rural Nova Scotia has forever affected me. I require silence. For a stretch of time, we lived in an old farmhouse on top of a hill and at the very end of a long gravel road. The house had a view of the sea, but was surrounded by forests and fields and felt somewhat enclosed, cut off. I spent many hours on my own, but there were lots of things to explore: slouching outbuildings, neglected meadows and dense wood, deer paths, bogs with carnivorous plants, an old bottle dump. It was a beautiful and sad place - and I will always feel a little homesick.

As well as being geographically cut off, we were at a remove socially. I was raised by British parents with very British accents and mannerisms - and I think we stood apart, seemed and sounded a bit odd. I didn’t fully lose my own accent until I was eleven or twelve, and people still hear it in my poetry - thanks to funny words, strange spellings, and a certain lilt.

When I was very little, I had a record of English nursery songs that I listened to repeatedly. For better or worse, there’s no way such a dark and disturbing mix would be produced for children today. Three pieces, in particular, left lasting impressions: “My Grandfather’s Clock,” “There Was an Old Lady Who Swallowed a Fly,” and “The Seventh Wave” (a solemn warning to a child - Don’t you go too near the sea - that was spoken, not sung). As an older child, I read quite a bit of poetry and loved Edward Lear, Walter de la Mare, T.S. Eliot’s Cats, James Reeves’ Prefabulous Animiles, and Hilaire Belloc’s nasty but entertaining Cautionary Verse. I especially delighted in irony and rhyme.

Bruce Taylor’s “Little Animals” is a long poem that fills me with envy, particularly for its use of a plain style that offsets dazzling images and metaphors. I admire the way the poet adjusts his lens, focussing here and there on peculiar details, while taking us closer and closer to his main subject. In the poem, Taylor imagines Vermeer-like scenes in the life of the first microscopist - a 17th century Dutch merchant named van Leeuwenhoek - and then offers personal accounts of his own nerdy adventures examining microorganisms under microscope. As in several other poems of his, Taylor sees ‘nature’ as ravenous and tenacious, rather than fragile and precious - a novel take these days. For over a year, I kept his collection, No End in Strangeness (Cormorant Books, 2011), by my bedside.

‘Nature’ has also inspired me, but not the kind of nature you find in the woods. I live in an urban centre, and have had loads of animal encounters - but of a distinct variety. It’s a turf war in the city, and humans and animals are competing for space. In my old house - filled with holes, niches and cracks - the animals have been getting in. I’ve dealt with bats and wasps, mice, and raccoons, to name but a few species. My poems sometimes examine those ubiquitous animals we encounter everyday, like pigeons and squirrels, even dust mites. I’m especially interested in the kind we call pests.

This is a common problem for me - a poem not working. Most poets that I’ve consulted begin with an inspired line or two, and let the process happen organically. I wrestle with subjects and ideas - those dreaded ‘intentions’ - and have to write a lot before finding the right opening. That’s not to say I ignore chance happenings - those magical leaps that take us to unexpected places. If a poem doesn’t contain any of those, it’s probably not a good poem. I’ve written lots of bad ones and have erased many - even burned a few! If a subject is important to me, and the poem isn’t working, I’ll take another run at it using fresh words or a new perspective. Then I’ll salvage anything from the old draft that’s useful or good.

Both beginnings and endings are important, but endings, for me, have the upper hand - probably because they resonate, or ought to resonate. They’re the lines that stay with us when we’ve finished reading. Endings, also, are more difficult to write; mostly, you want them to conclude without being too conclusive. For example, Paul Muldoon’s “Cuba” closes with graceful, gentle subtlety. Elizabeth Bishop’s “At the Fishhouses” - on the other hand - resolves like an argument, a lyrical summation. It may be the finest ending I can think of.

James Arthur’s chapbook, Hundred Acre Wood (Anstruther Press, 2018) contains some amazing poems, several of which are about parenting and storytelling. One of these, “Goodnight Moon,” is incredibly poignant. An elegy of sorts, it is both timeless in subject matter but also situated in a very particular time and place (closing time at Palmer Square). Speaking of closings and endings... this poem says goodnight beautifully.

I recently read Abigail Parry’s new collection, Jinx (Bloodaxe Books, 2018), and was impressed  by her wordplay, formal agility and British mischievousness. The stand-out poem in this collection is “Arterial,” which won the 2016 Ballymaloe International Poetry Prize. Looking for another brilliant ending? This poem’s final image of the poet, pulled over in the rain, writing to the beat of her windshield wipers, is very fine indeed.

Jenny Haysom was born in England and raised in Nova Scotia. She has a Master’s degree in English Literature from the University of Ottawa, and has worked for independent booksellers, the Ottawa Public Library, and as Prose Editor for Arc Poetry Magazine. Her writing has been published widely, in places like CV2, Dusie, The Fiddlehead, The New Quarterly, and The Walrus, as well as in chapbook form (Blinding Afternoons, Anstruther Press). Dividing the Wayside is her first full-length collection of poems. She lives in Ottawa with her family.

The liminal strip that divides the highway from the surrounding land is called a wayside. Often thick with wildflowers and insects, it's a natural space that coexists with traffic and exhaust. In Dividing the Wayside, Haysom likewise navigates the territory in between, searching the intricate periphery of experience for hidden meaning and beauty. Her voice is passionate, charming and ironic, her language precise and musical.