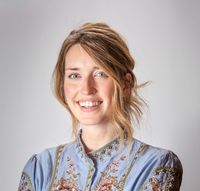 In her newest book, The Girl Who Rode a Shark: And Other Stories of Daring Women (Pajama Press), author Ailsa Ross shows kids and grown-ups alike that the great heroes of history are not always the men they've read about in school.

Featuring beautiful artwork by illustrator Amy Blackwell, The Girl Who Rode a Shark tells the stories of 52 women who beat unimaginable odds, made a lasting impact on our planet, and fought against injustice. From ancient warriors to modern-day activists, Ross delivers illuminating and page-turning portraits of resilience and bravery that will inspire readers of all ages.

We're thrilled to have Ailsa here today to talk about her new book, a rather unique pre-writing ritual, and why she's already feeling the itch for a sequel.

The Girl Who Rode a Shark: And Other Stories of Daring Women tells the stories of 52 real-life women adventurers.

Technically, this is a middle-grade book — though I’ve heard of lots of grown-ups keeping the book for themselves! I guess the lives of aquanauts and astronauts, treetop explorers and eagle hunters are fascinating at any age.

The adventures in the book take place from 2,000 years ago to today, and the illustrations are all by the amazing Amy Blackwell.

Initially, this book project came out of the @womenadventurers Facebook and Instagram pages I started a few years ago. I began telling women’s adventure stories because, well, there’s still a day in many schools where Columbus is portrayed as a kind of swashbuckling hero — and I’ve been determined to open up the adventure narrative into something deeper and more diverse. Hence this book.

You won’t read about Columbus — but you will get to know the story of Nzinga. She was a 17th-century queen who fought the Portuguese colonisers who were taking people away as slaves from present-day Angola. She was tough. She was brave. And she was said to have led her armies into battle herself.

There wasn’t a central question, but I did have a central aim — to make a person feel more curious and brave in themselves as they read and enter the world of these stories.

I read so many diaries and memoirs and biographies. I dug into archives, and I interviewed some of the contemporary women featured over the phone.

In terms of unexpected encounters, it was a happy surprise to find that there are so many more women adventurers whose stories could have been included. Maybe there needs to be a sequel?

I have so many rituals — but I suspect the ones that matter are: coffee, going outside before I look at a screen in the morning, and switching off my wifi for long stretches of time.

Before I begin writing, I also dab Hinoki (Japanese cypress) oil on my wrists. In The Nature Fix, Florence Williams cites a study that found that the phytoncides in cypress oil reduce stress by 53%. I like the sound of that stat. Really, though, I just like to smell like a tree.

I talk about the problem with my partner or a friend, and they help me climb out of my head.

All I want from non-fiction (or any genre) is to find that the world glimmers a little differently after reading. A few recent favourites have been:

*The Lonely City by Olivia Laing

I also loved Patricia Lockwood’s memoir Priestdaddy. You get to be that elastic with language? That free?

With the Writers’ Trust of Canada, I’m currently the writer-in-residence at Pierre Berton’s childhood home in the Yukon. I spend a lot of time walking Dawson City’s old Gold Rush streets — I’m in love with the ravens, the birches, all the lace curtains. I guess flâneuring doesn’t really count as work, though.

When I’m not outside I’m working on A Field Guide for Feeling Free: a more-than-memoir about eight iconic women writers who’ve been drawn to fierce landscapes — and learning to stay amazed by one place.

Ailsa Ross is an author, editor, and fact-checker. Born in Scotland, she studied law with a focus on women’s and human rights. Her work on the topic of inspirational women began on social media before expanding into the world of books. She lives in Alberta’s Jasper National Park with her family.

The Girl Who Rode a Shark: and Other Stories of Daring Women

Now more than ever, the world is recognizing how strong women and girls are. How strong? In the early 1920s, Aboriginal Alaskan expeditioner Ada Blackjack survived for two years as a castaway on an uninhabited island in the Arctic Ocean before she was finally rescued. And she’s just one example.

The Girl Who Rode a Shark: And Other Stories of Daring Women is a rousing collection of biographies focused on women and girls who have written, explored, or otherwise plunged headfirst into the pages of history. Undaunted by expectations, they made their mark by persevering in pursuit of their passions. The tales come from a huge variety of times and places, from a Canadian astronaut to an Indian secret agent and to a Balkan pirate queen who stood up to Ancient Rome.