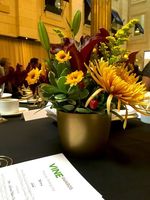 Yesterday at a luncheon at Toronto's Windsor Arms Hotel, five authors were presented with the 2019 Vine Awards for Canadian Jewish Literature. The awards celebrate both Jewish writers in Canada and non-Jewish writers exploring Jewish themes or subjects, across five genres of literature.

Each winner receives $10,000 in recognition of their literary excellence, and joins past winners like Sean Michaels (who was also awarded the Scotiabank Giller Prize), Max Eisen, and David Bezmozgis.

Each author was invited to speak following the presentation of their award (excepting Auxier, who was unable to attend the ceremony). Fiction winner Claire Holden Rothman read a brief quote from Shakespeare's King Lear, the inspiration for her winning novel, reciting: "So we'll live and pray and sing and tell old tales", reflecting that the quotation "evokes what it means to be Jewish". 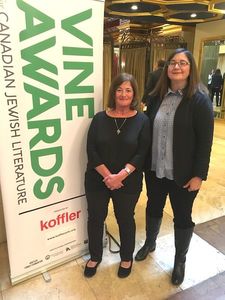 Nonfiction winner Anne Michaels, also an acclaimed poet and fiction writer who was nominated in the poetry category as well, dedicated her win to the memory of recently lost loved ones, reading a list that included late McClelland & Stewart Ltd. Publisher Ellen Seligman, an iconic Canadian editor who worked with Michaels for many years. Michaels accepted the award "in their memory and with love," noting "literature carries the living and the dead... memory knows the dead can read."

Linda Frank, a Hamilton-based poet who won for her collection Divided (Wolsak & Wynn), addressed the subject of her poems, noting she had written to honour "a world that is sadly vanishing because of how we've exploited our environment". She also focused on women scientists in her collection, which has been called "a vital text". 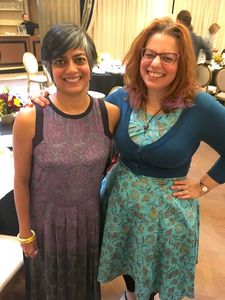 Like Michaels, New York-based historian Benjamin Carter Hett dedicated his award in the History category to one of the inspiring figures he researched for his book, a German-Jewish lawyer who fought the Nazis and ended up dying in the infamous Dachau concentration camp for his resistance efforts.

Though Jonathan Auxier, the Children's Literature and Young Adult winner was unable to attend, he sent a statement, which was read by juror Melanie Fishbane, in which he discussed his enthusiastic journey getting to know the Jewish myth of the golem on which his winning book, Sweep, was based, noting how much he loved getting to know "the rich and complicated stories of these monsters". He ended by observing that though it is a "dark time [in history]... if anything can repair our world, it is stories." 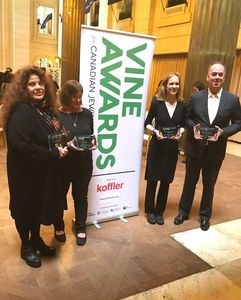 The Vine Awards were founded in 1988 and re-named in 2004 to honour Helen and Stan Vine, the parents of Lillian Glowinsky. Lillian and Norman Glowinsky support the full slate of Vine Awards through their family foundation, and the awards are administered by The Koffler Centre of the Arts, a central for Jewish arts and culture.

For more information about the Vine Awards, please visit the Koffler Centre website.