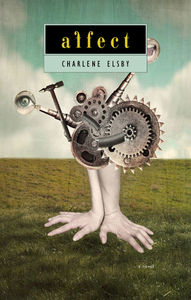 Our most intense relationships are sometimes the ones that make the least sense from the outside. But what happens when you try to understand and explain of one of those irrational, intense connections that seem to defy logic?

It's a question at the heart of Charlene Elsby's Affect (Porcupine's Quill), which follows the musings of a philosophy student swept up in a love affair that challenges her previous commitment to reason and intellect above all. It's a relationship that eventually has her questioning not only what she thinks about love, but about life and death, and even reality.

Surreal, sparse, and equal parts romantic and tough, Affect is a gutsy, brainy examination of love and connection. We're excited to present an exclusive excerpt from the novel here today, courtesy of Porcupine's Quill.

Excerpt from Affect by Charlene Elsby:

When I met Logan, he always seemed happy, not because he was happy, but because he knew enough to know that was how you get to be happy.

Logan says that when he was small, he varied with the days. The nights were dark and darker, but during the day, he was the light.

Over time, the dark built up and spilled into the days. When Logan was young, the dark stayed over from the night before and kept him going until night again. This lasted several years.

When Logan was young but not that young, he tried to leave and discovered that there was now here to go. This is true. Any place is as good as any other, for they are all places, and there’s no place that isn’t.

When Logan was old enough, he could play again. He was essentially playful, but he had a double consciousness that told him that the darkness would keep him alive longer, and so he could only play when he was sure nothing was about to kill him. As the consciousnesses merged, he discovered that not much at all could kill him, especially if he were to evade it, and especially if he laughed at it.

Logan slept wherever he could, because he was not beholden to the same rotations the rest of us were. He recharged himself when the power sources were available. He ate more apples than most.

Logan did things a bit at a time. I watched him paint his mother’s stairs once. First, he went to the store for sandpaper. Then he sanded the stairs. Then he went to the store for paint. He came back with paint, but he had no brush. Then he went to the store for a brush. When he had his brush, he had nothing to stir the paint with, so he went back to the store for one of those wooden sticks. Anything else could have done, but wouldn’t. Anyone else might have done all of those things at once. This is because their futures are already determined and compartmentalized into present moments. Logan’s future was indeterminate; just because he was going to sand the stairs did not mean he was going to paint them, so everything had to unfold linearly. We take too much of the future and try to do it now, he’d probably say. But the hours from now are still hours from now, and we don’t want to deny that to them.

If you put Logan somewhere he wasn’t supposed to be, he’d figure out how to be there, and that would be that.

Logan tried to make it seem as if everything were simple. If something was supposed to be a certain way, and it was in your power to make it that way, Logan thought that’s how it should be. He didn’t take into account all the invisible barriers. It was as if he couldn’t see them. Sometimes he insisted they weren’t there.

Logan’s loyalty was most obvious in his alignments. If I hated something, so did Logan, and if I didn’t, neither did he. If there was some disagreement, we’d have to figure out how we were going to feel about things from now on. But there was no question about agreeing to disagree. That was for other people, who couldn’t figure themselves out for one reason or another.

The worst thing you could do to Logan was to disagree with him about philosophy. It was too much of a reversal. He had gotten used to the world rewarding him for his musings, and it was too far to go, to move from reward to contradiction. It wasn’t an attack on an idea; it was an attack on the universe as it had come to be. You could destroy his world. Well, not everyone could, because not everyone mattered. I could; my objections were material.

If anything were wrong, Logan would want to fix it. Sometimes he didn’t know how, so you had to tell him. If you didn’t know, it was a mess. You had to figure out how Logan could fix the problem, so that he could do it.

Logan cared how he appeared to the world, but he also knew he wasn’t supposed to, so he tried to appear like he didn’t care, so as to appear correctly.

Logan knew exactly how bad it had gotten, and he didn’t mind.

It turned out Logan just liked the free popcorn at the hardware store. I’m pretty sure there was a suggested donation, though.

Logan wanted to hurt everyone who had done me wrong, and he would have, if he hadn’t understood that it wouldn’t work out best for me.

Logan’s favourite stories were the ones where a force of good overcame a force of evil, not because it was stronger, or more clever, or more powerful, but just because it was good. He looked at the way people were to each other, and he refused to understand how they could live with it. There was no getting used to the way things were, for Logan. The slightest injustices must be corrected, along with the most massive. The scale didn’t matter. There was no such thing as a battle that wasn’t Logan’s to fight. ‘None of my business’ was an idea for the weak and mean.

Logan didn’t care if it was too warm to hold hands or lie together. There were more important things than temperature related comfort.

There was also no such thing as, ‘I’m just not that kind,’ for Logan. He knew he had chosen who he wanted to be, and he could choose otherwise if he wanted.

If you asked him to, Logan could ignore whatever was wrong with you, as long as you convinced him that it would be for the best. Otherwise, there was no chance.

Logan always had to be the one to carry heavy items. But that also meant that if he couldn’t carry it, we couldn’t have it.

Logan insisted that he didn’t care for any creature comforts, but you could catch him enjoying them if his guard was down. At the same time, he could live without them, and I’d seen him do it.

Logan used to iron his shirts, but he stopped when he figured out that I wasn’t going to do it for him, and that I didn’t care whether there were creases in his fabrics or not.

If you were mean to a barista, on the other hand, then fuck you. You had it coming. Logan’s been saving all his frustrations just for you, and his voice carries. Now everyone knows.

Logan liked to take pictures, and he liked things in nature the most. I preferred the other kind—I liked to see the humans and the things that they’d created, but especially if they were left to disintegrate. If not people, exactly, then evidence that they had been there, that they had built a thing, for a purpose, and here it was, there it was, and now you could tell what something was supposed to be, even though it wasn’t any longer. The purposiveness in nature wasn’t as obvious, but he seemed to like it. Once he told me he was going to teach one of his students how to take pictures, and I pretended that was fine.

Logan had his own plans.

It used to be that when Logan was upset about something, it was about everything, and not even he could tell you what the source of the upset was. But he figured it out eventually, and also whether it was important. Mostly, it wasn’t.

Logan liked the way colours worked together most of all. He noticed if my lipstick matched my shirt. He liked to look at the sky while driving, in the morning and in the evening. He’d always point out when it was time to take pictures. It happened every day, but every day was different, so he could justify it.

At Logan’s funeral, I’m supposed to play ‘Life on Mars’ by David Bowie, and be sure to include something by Rimbaud.

Logan could live without me, even if he didn’t want to.

The only reason Logan might think he couldn’t do something was if he noticed that he hadn’t done it yet and wondered why.

Sometimes I’d find out that Logan didn’t know something it seemed everyone else knew, and I’d wonder if he had in fact been alive all this time, or whether he had come into existence just for me. Things you have to do to live, mostly—how to hang a shelf, how to get phone service, that kind of thing. It was like he hadn’t been anywhere for years, at least nowhere where these things mattered. He didn’t need to learn these things, because I would come along, and I did.

Logan could live in the imagination for as long as he had to.

Sometimes when Logan slept at night, I’d stare at him and wonder how the corpuscles all came to understand these things. It was as if Logan weren’t there at all. He was off, waiting for his cue to return to the flesh for the morning, the afternoon, and the evening after that. But in the meantime, the corpse remained there, waiting. It was nothing short of magic, though he did it all the time.

I think he understood that I didn’t want to hurt him.

Charlene Elsby has a Ph.D. in philosophy from McMaster University, where she worked on Aristotle’s notion of non-existence. She is the president of the North American Roman Ingarden Society and vice president of the North American Society for Early Phenomenology. She is the author of several academic works on metaphysics, ontology, aesthetics, literature, and logic. Her first novel, Hexis (Clash Books), was published in February 2020. She lives in Ottawa.

Affect is the story of a hyper-rational and unapologetically cerebral philosophy graduate student, obsessed with both death and Logan. Their relationship develops through a series of surreal events (in which corpses appear with disturbing frequency), where Logan comes to infiltrate the narrator’s psyche and occasions the collision of her interior and exterior worlds.

Affect examines and interprets, in prose that is spare, poetic, and philosophical, how we think about life and death, time and distance, and the deeply affecting effects of an intense entanglement of a ‘one’ with an ‘other’.