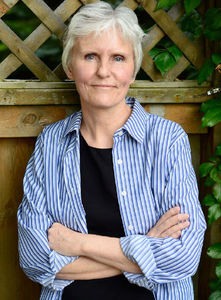 Governor General's Literary Award winner Terry Griggs does it all - from adult novels to beloved children's books, her career has earned her honours including the Marian Engel Award and even a Project Bookmark plaque excerpting her work.

Her new novel is The Iconoclast’s Journal (Biblioasis), in which young Griffith Smolders decides the mysterious lightning he sees on his wedding night is a sign he should bolt from the alter. He literally escapes through a window and embarks on a series of adventures, pursued by his jilted bride, Avice Drinkwater. Madcap, exuberant, and wonderfully witty, it's an absorbing tale from a writer at the top of her game.

We're excited to welcome to Terry to Open Book today. She's taking us into her vibrant red workspace (an office, not a study, as she explains) to show us where the magic happens as part of our At the Desk series. She tells us about working from a moldy basement beside a furnace before leading a coup to claim her current space, why she can't quite embraced the messy desk philosophy, and the many (fabulous!) works in progress tucked around her office.

At the Desk with Terry Griggs:

When my family first moved into our current house, one of the compact Victory homes built after the Second World War for returning soldiers, we set up one of the rooms, likely a former nursery, as a dining room. Bit of a squeeze, but fair enough. I repaired to the basement and settled in to write. I’d been in basements before, once working companionably beside a portly rumbling furnace. This new spot was less congenial and had a kind of underworld ambience—damp, cold, dark, moldy. Before too many sentences were shivered into shape, a domestic coup occurred of which I’m sure Virginia Woolf would approve. Friends, I laid siege to the dining room, transforming it into a warm, welcoming ‘nursery’ for whatever mad thing I might dream up, while in a truly post-war spirit, the family retreated to the living room to sit with plates of grub balanced on knees like TV dinners minus the TV.

Have to say that my office—not a study, but an office, a workspace—makes me incredibly happy. The walls are a visceral red, which I’m told is good for the metabolism, and I’m surrounded by lots of this and that: functional things, file cabinet, paper shredder, etc, and just things I like that have washed ashore from different times in my life, including toys, dictionaries, postcards, old furniture (the desk chair has a ear-reaming screech if swivelled) rocks, marbles, a stuffed fly, and my ‘Against Amazon’ pin courtesy of Biblioasis.

Sounds cluttered, although in fact I’m a bit of a neatnik. If visiting, I promise not to straighten your wonky lampshades, but alignment happens here. I know that messy spaces are considered to be creatively fertile ones, and do allow a degree of entropy in mine (around 3%), yet find that tidying-up is not only virtuous-seeming, but clears the head of trivia—it’s meditative!—and dovetails nicely with procrastination, which I happen to be very good at. 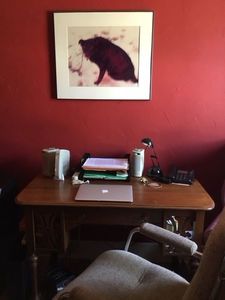 A friend a while back reminded me that in university days I described my bookshelves as altars. Oh dear. Well, the main one in my office might have that appearance, but I am not a reverent or sentimental sort, so nothing on it is fetishized. I do have a lucky horseshoe, which, as far as I know has brought me no luck whatsoever. And the top of the bookcase is where the feline office help, a confirmed pagan, sleeps, when she’s not standing in the in-out tray staring at me pointedly. Despite my control-freak leanings, the books themselves are shelved in no particular order, neither by category nor colour (heaven forbid) and tend to migrate around the house and sometimes right out the door, off to the Goodwill.

Leaning against the wall between the bookshelf and the printer is an original drawing from David Hickey’s A Very Small Something, a children’s book that my son, Alexander Griggs-Burr, illustrated. Above my desk is a photograph of a red-eyed black dog that bristles with menace. I love it (don’t ask) and it’s been with me since the late 80’s, when I purchased it from a young London, Ontario photographer, Steve MacDonald. In real life the dog was apparently very sweet and mild-mannered and a good friend to the late artist Greg Curnoe. The other artwork in the room is a poster that features a photo of Tony Urquhart’s that graced my first book and remains one of my favourite covers.

On my desk sits the usual stuff. My rotary phone finally gave up the ghost, so I’ve had to resort to this undistinguished squat thing with buttons. More personally, there’s a nice little chunk of fossil-studded limestone from the shore of my childhood home on Manitoulin Island that anchors the laptop’s power cord when not plugged in. As well, there’s a small brass tortoise, not from the Galapagos, but from Glasgow, that’s my compositional familiar—we both move at about the same speed. In keeping with our nursery theme, I’d define my writing process as one that advances in baby steps. Notes, notebooks, a foray onto lined paper with a pencil, then a pen (much doodling), screen, revising, revising.  I enjoy all the steps—at least in retrospect—especially the fussing. 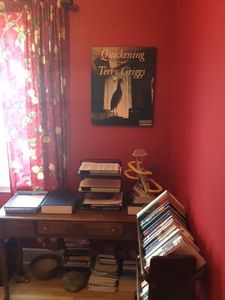 Although I usually work on one manuscript at a time until finished, I also have a number of different ideas and works simmering away. I keep these separate in various parts of the room and in various containers—a drawer, a file, a shelf in the closet, an old wooden silverware chest— their visibility depending on how close they are to being taken-up. At present I’m researching the next novel, while also finishing-up one for the younger set. Waiting in the wings:  a shelved novel I want to re-consider, a comic graphic series I’m thinking about, an unfinished manuscript of little weird stories titled The Insectarium, possibly a sequel to Thought You Were Dead. In other words, not retiring quite yet.

Besides, I have some celebrating to do before I become historical fiction myself, for The Iconoclast’s Journal—formerly Rogues’ Wedding—has been raised from literary oblivion, re-christened with its original pre-pub title, and featured in Biblioasis’ excellent ReSet series, ready to rock once again!

Terry Griggs is the author of Quickening, which was nominated for a Governor General’s Award, The Lusty Man, and Thought You Were Dead. Her popular children’s novels include the Cat’s Eye Corner series, and, most recently, Nieve (Biblioasis). In 2003, Terry Griggs was awarded the Marian Engel Award in recognition of a distinguished body of work, and in 2010 honoured with the installation of a Project Bookmark Canada plaque in Owen Sound. She lives in Stratford, Ontario.

Interrupted during his preparations for the conjugal duties of his wedding night by a mysterious glowing ball of light, Griffith Smolders jumps out the window and flees across the countryside of Victorian Ontario. With his bride hot on his heels, Grif’s madcap adventures come to an end when Avice, intent on exacting her revenge, finally runs him aground.