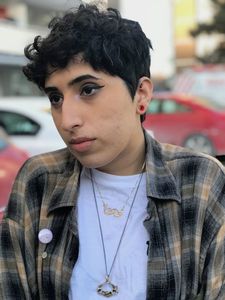 Hana Shafi is the hilarious big sister you always wished for. Her frank, smart, relatable poems tackle everything from anxiety to unibrows, unemployment to rushing to throw up in a bar bathroom. It Begins with the Body (Book*hug) is a firecracker of a collection, made even more powerful by Shafi's own illustrations, which find both beauty and humour in the unvarnished details of our lives and bodies.

It's an unmissable debut and we're excited to welcome Hana to Open Book today so we (and you!) can get to know her through our Dirty Dozen series, where we challenge author to share twelve unexpected facts about themselves. She tells us about her unexpected favourite spot for meditation and reflection, her indefatigable karaoke schedule (and her go-to song picks), and her absolute correct stance on whether watching Die Hard counts as a Christmas tradition.

The Dirty Dozen, with Hana Shafi

1. I’m obsessed with Halloween. I start planning my costume in late July/early August and I usually start buying Halloween-themed decor pretty early too.

2. My nickname is Hanoo. It’s been that way since I was a little kid, but only my friends can call me that without me getting annoyed.

3. I have an intense fear of clowns. My friends had to drag me to the movies to see the new It film (because I’m a huge horror movie fanatic and kind of had to see it to retain my horror creds). But it freaked me out so much I actually started crying a bit in the theatre. What can I say? Clowns are just terrifying.

4. I like going to graveyards. They used to creep me out a little, but they’re actually really peaceful and beautiful. It’s a great place to collect your thoughts, to meditate or ground yourself.

5. One of my all time favourite hobbies is karaoke, and I try to go at least once a week. I reluctantly did public karaoke for the first time about a year and a half ago, and I’ve been hooked ever since. People think it’s going to be really embarrassing, but most folks who hit up karaoke bars aren’t there to be judgemental. Also, my go-to karaoke song choices are always Amy Winehouse, and sometimes "What’s Up" by 4 Non-Blondes.

6. I love Baroque and Renaissance Christian art. I don’t know why, it just fascinates me even though I’m not religious at all. But there’s something about those periods of art and their depiction of Biblical stories and themes that really captures my imagination. They are usually pretty morbid paintings, but the amount of reverence and intensity that goes into them is truly hypnotic.

7. One of my favourite cartoons, that not a ton of folks remember unfortunately, is a series called Cybersix. It wasn’t on the air for long in Canada, but those remember will probably say it’s seriously cool.

8. For comic-con two years ago, I went as the brown girl version of Kylo Ren. I basically did a South Asian remix on his outfit by wearing an all black sari. I felt really badass in that.

9. When I was a little kid, I had an imaginary friend named Jane and he lived on the moon.

10. I had never been to a a musical before until this year. I randomly got tickets to Bat Out of Hell when a bunch of cast members came into the place I work part-time and we got to chatting!

11. When my best friend and I were in the fifth grade, we really wanted to have our own club house. This was every kid’s fantasy. But obviously, since we couldn’t actually have a real club house, we put up a sign and some decorations in my closet and would just, all cramped up in there, be pretending we were in our secret club house. Definitely one of my funniest memories of our friendship.

12. I have to watch Die Hard every year around Christmas. I know there’s always been this huge debate about whether it’s a Christmas movie or not. But I don’t care. It’s my Christmas ritual.

Hana Shafi is a writer and artist who illustrates under the name Frizz Kid. Both her visual art and writing frequently explore themes such as feminism, body politics, racism, and pop culture with an affinity to horror. A graduate of Ryerson University’s Journalism Program, she has published articles in publications such as The Walrus, Hazlitt, This Magazine, Torontoist, Huffington Post, and has been featured on Buzzfeed India, Buzzfeed Canada, CBC, Flare Magazine, Mashable, and Shameless, Known on Instagram for her weekly affirmation series, she is also the recipient of the Women Who Inspire Award, from the Canadian Council for Muslim Women. Born in Dubai, Shafi’s family immigrated to Mississauga, Ontario in 1996, and she currently lives and works in Toronto. It Begins with The Body is her first book.

It Begins with the Body

It Begins With The Body by Hana Shafi explores the milestones and hurdles of a brown girl coming into her own. Shafi’s poems display a raw and frank intimacy and address anxiety, unemployment, heartbreak, relationships, identity, and faith.

Accompanied by Shafi’s candid illustrations that share the same delightful mixture of grotesque and humour found in her poems, It Begins With The Body navigates the highs and lows of youth. It is about feeling like an outsider, and reconciling with pain and awkwardness. It’s about arguing with your mum about wanting to wax off your unibrow to the first time you threw up in a bar in your twenties, and everything in between. Funny and raw, personal and honest, Shafi’s exciting debut is about finding the right words you wished you had found when you needed them the most.