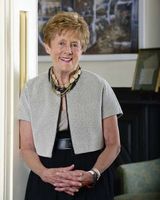 Patchwork Society (Dundurn), the newest novel by author Sharon Johnston and the second in her Bread and Roses trilogy, takes place against the backdrop of Sault Ste. Marie, Ontario during the Depression and Second World War.

Clara Durling, with daughter Ivy in tow, has relocated to the northern town to begin a new job as the head nurse of a residential school. As she settles into the position, she becomes dismayed by the tragic stories and stark realities of the children under her care. Meanwhile, Ivy begins a dalliance with the bootlegging underworld through a new Italian friend.

The longer the two spend in 'the Soo', the more they discover the social and political complexities existing just under its facade.

A thrilling and thought-provoking examination of systematic racism, gender-based bias, and small-town culture, Patchwork Society is page-turning historical fiction that will both illuminate and entertain.

We're very excited to have Sharon at Open Book today to discuss why she loves all her characters equally, the intense research involved in her newest book, and why it's important to keep her own voice out of the narrative.

Patchwork Society is the second novel in the Bread and Roses trilogy. The characters in my debut novel—Matrons and Madams— flow into Patchwork Society which I began two years ago. These two books describe social history in the post-Great War era through the Depression and World War II. The final novel will touch on the counter-revolution of the sixties and seventies which was my era.

I discovered the tragic story of children in residential schools and learned that the government and churches enacted discriminatory policies for their own selfish ends. Sault Ste Marie was a uniquely cosmopolitan small town, and I came to understand that people could be good yet misguided. I was affirmed in my belief of the importance of family and community.

For Patchwork Society, I chose the setting of Sault Ste. Marie in northern Ontario where the characters of my first novel had moved from Lethbridge, Alberta. The Soo is where I grew up. My grandmother was the nurse-matron at Shingwauk Indian Residential School. It is where her daughter—my mother—married, divorced, and became an award-winning social worker. Some of her clients were former students of the Shingwauk school.

I've loved all my characters. They were real or well-documented historical people. I carried them in my heart and consciousness. None of them were alive but I could feel them in the present as I wrote. I admired their independence and courage in a society that was often unfair. They were not perfect, but they were my heroes.

I read hundreds of pages of government correspondence, medical records, personal letters and diaries, historical records, newspaper articles, and Truth and Reconciliation Commission statements. To put together the stories of my first and second novel, I had to wear the hat of a detective. I also had to keep my indignant voice out of the narrative. I was not there.

What was the strangest or most memorable moment or experience during the writing process?

When four people whose opinions I highly valued read an early draft and committed to endorsing the final manuscript.

Who did you dedicate your novel to and why?

I dedicated Patchwork Society to my five daughters who have demonstrated the same courage and good values as their grandmother and great grandmother before them— principled, hardworking, and caring.

Sharon Johnston has received five honorary degrees for her work in mental health awareness and has served for five years as an Honorary Captain (Navy) for the Military Personnel Command. She lives on a farm near Ottawa.

A sweeping tale of life in Sault Ste. Marie from the 1930s through the Second World War.

Clara Durling and her teenage daughter, Ivy, move to Sault Ste. Marie in 1932, where Clara is starting a job as head nurse at the local residential school. As Clara adjusts to life in the Soo, she discovers the town is a many-layered society.

Clara works with Indigenous children who have been ripped from their communities and now live frightening, lonely lives in a crumbling building. While Clara struggles to deal with the despair at the school, Ivy makes a friend from the working-class Italian community and has a brush with the bootlegging underworld.

After high school, Ivy heads to nursing school in Montreal but finds society’s expectations for young women do not foster their self-reliance. As Ivy struggles with sexism and societal norms, she and Clara seek to bring humanity to those living at the margins of society.