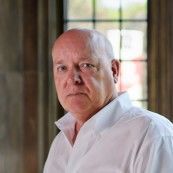 At the start of the 1980s, China sits on the precipice of a new era of economic growth and prosperity, but not everyone is welcoming it.

This exciting and tumultuous time is the setting for best-selling author Ian Hamilton's new book in his Uncle series, Foresight: The Lost Decades of Uncle Chow Tung (House of Anansi). Already a beloved character in Hamilton's celebrated Ava Lee series of books, this novel marks the second in a new series telling Uncle's story.

When Premier Deng Xiaoping begins creating Special Economic Zones across China in an effort to boost the nation's strength, Triad leader Uncle worries that it will impact on his current businesses. If he wants to save his organization during these changing times, he'll have to get inventive.

We're very happy to have Ian at Open Book today to discuss the intense level of research that went into his new novel, why he dedicated the book to his former publicist, and why he wishes he was a little more like Uncle.

My books tend to run into each other, so I started writing Foresight on the same day I finished the first Uncle book, Fate, which would have been around July 2018. The plan was to make the Uncle books a trilogy, so I had a three-book story arc in my mind which has now expanded to four. In any event, I started Foresight in July, but had to put it aside while I rewrote parts of The Mountain Master of Sha Tin - my 13th Ava Lee novel. When I returned to Foresight, luckily it was as if I've never left it.

Yes, it did, because although I had a story arc which stayed reasonably intact, my initial ending had Uncle and his partners negotiating their way out of danger with some senior Communist officials. A key part of the book involves Uncle's grudging respect for Deng Xiaoping as a person, and Uncle's interest in Deng's plan to grow the Chinese economy through the creation of Special Economic Zones, so I thought - why not have Uncle and Deng meet? That became the third last chapter in the book and, in reality, the ending, and it was one that I loved writing. Mixing a real person with fictional characters is something I hadn't tried before. I'm doing in again in the next Uncle book, Fortune.

There are several minor characters that I enjoyed creating and writing about, such as Fong - one of Uncle's assistants - but Uncle himself is by far and away my favourite. He is in his thirties in this book, but in his character and the way he goes about his business, you see the early formation of the wonderful man he becomes in his seventies and eighties. He is a man who worries and who is full of doubt, but once he makes a commitment, he never wavers. He's incapable of betraying a trust. He is someone I wish I could emulate more.

Actually, I did quite a bit. Certainly more than I did for any of the Ava Lee novels - mainly because with Ava I am writing about places I've been to and issues I know something about. But Foresight is set in 1982 in Shenzhen, and at the start of Deng's economic expansion. I had to research Deng, and the Special Economic Zone's mandates and structures, and I had to recreate a Shenzhen I hadn't seen. In truth, for the purposes of the story, I fast-forwarded Shenzhen's growth - that is something I touch on in the book's acknowledgement section.

The book is dedicated to Laura Meyer, who was my publicist at the House of Anansi for a great number of the Ava Lee books and the first Uncle book. As someone who became a writer late in life, I had no concept of the nuts and bolts of the book trade, including the importance of a good publicist. Most publishers (and for sound economic reasons) don't spend money on things like advertising, so the public attention a book and author get is dependent on reviews, media appearances, web sites, and various literary events. The publicist is the key to delivering on all of those. Laura delivered. She also happened to be one of the kindest, most conscientious, and hardest-working people I have encountered across many years and various careers. She left Anansi last year after Fate came out.  My dedication to her is my way of saying thanks to someone who served brilliantly in a job that is often thankless.

Ian Hamilton is the bestselling author of the Ava Lee and Uncle Chow Tung series. His books have been shortlisted for numerous prizes, including the Arthur Ellis Award, the Barry Award, and the Lambda Literary Prize. BBC Culture named Hamilton one of the ten mystery/crime writers from the last thirty years who should be on your bookshelf.The Ava Lee series is currently being adapted for television.

1980: A pivotal year in modern Chinese history as Premier Deng Xiaoping begins what he intends to be the transformation of China into an economic superpower. The most visible evidence of Deng’s policy is the creation of Special Economic Zones, and one has been set up in Shenzhen, next door to Hong Kong and on Fanling’s doorstep. Among Triad leaders, Uncle is the only one who recognizes that Deng’s intentions could have profound repercussions on their organizations. To protect his gang and their interests, he acts to not only minimize the negative impact, but to turn events to his advantage.