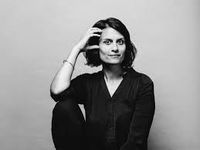 To have a child in unstable times is a complicated undertaking. Worry and hope collide in one of the most high stakes ways possible. It's an experience Julietta Singh captures with breathtaking resonance in The Breaks (Coach House Books), a genre-busting experiment that takes the form of a letter to her six year-old daughter. Combining memoir, essay, and nonfiction treatise on race, queer parenthood, and ecological responsibility, The Breaks is both clear-eyed and toughly hopeful.

Calling for a change from the habits that have led us into climate and political disasters, Singh not only deftly identifies where we've gone wrong but offers practical and nuanced suggestions for how we can move forward, with a focus on community and inclusion. Her writing is the perfect prescription for the hopelessness that can—understandably—feel like an unavoidable byproduct of our times.

We're excited to have Julietta on Open Book today to talk about The Breaks through the lens of our My Story memoir interview, even as she plays with the limits of the genre.

She tells us how the form of The Breaks drew inspiration from greats like James Baldwin and Ta-Nehisi Coates, why the ending of the book had to change while she was writing it, and what it was like to revise an entire manuscript while being home with a small child during the pandemic.

I almost hesitate to call The Breaks a memoir, even though it fits that category easily. For me, it’s a rallying cry for another kind of world. As a long letter to my daughter, the book is one I had been feeling pulled to write across my early years of parenting. This feeling grew more urgent as my daughter began her formal schooling and I had to confront that the official stories of national becoming were not the stories I believed in, and were actually stories that caused great harm. I wanted to explore ways of talking with my child about the brutalities of the present—from the climate crisis to systemic racism and police brutality—without masking over the truths that we all need urgently to face. In turn, I wanted to learn from my daughter’s own visionary ideas and efforts, to begin to reconsider what we’ve taken as rightfully ours, and to open myself up to action that exceeds my own learned politics.

I like to write books about questions I don’t yet know how to answer. In this book, the question was: How might we more consciously and ethically raise children and transform ourselves in the midst of political and ecological catastrophe? I was interested in the urgent feeling of revolutionary love that seemed to flourish in me as I learned to be a mother. And I was curious about how we might approach parenting not as a practice of reproducing ourselves, but of helping to shape other humans whose politics could and must exceed the limits and traps of our own. I wanted to ruminate over forms of teaching that could prime us to live otherwise, toward more equitable and indeed survivable ways of being.

The feverish spirit of The Breaks was there from the start, but some scenes and details definitely shifted and changed across many revisions. The most significant change was the decision to rewrite the end of the book. I had signed a contract for The Breaks just before the pandemic struck, and before George Floyd’s murder ignited a mass mobilization of bodies in the streets. That earlier version of the book was anticipating the end of one world and the beginning of another, and then there we were... It felt necessary to write into the moment, to take us right up that threshold and to let it end just where we were.

My answer to this question has changed so much through parenthood, and now again through pandemic parenting! I used to think I needed long stretches of time and space to write, a quiet surround and just the right tools. While I still sometimes fantasize about the luxury of all that, I’m interested in how and what we produce when we no longer have access to those conditions. For me, the question is less “what do I need,” so much as it is “what do we have here”? A version of The Breaks was written while my daughter was at school, but the entire book was revised and several parts written from scratch with her buzzing around me between homeschooling sessions, often peeking over my shoulder at what I was typing. These are the new rituals, ones through which we begin to learn that what we once thought was indispensable turns out to be a luxury we can survive (and write) without.

I drew from incredible writers of colour for inspiration on this book. I set off from the Black epistolary, from incredible paternal figures like James Baldwin and Ta-Nehisi Coates, both writing to Black teenage boys facing a criminal justice system designed to devour them. Of course, I am a Brown mother writing to my daughter, so while the stakes of their messages are crucially linked to mine, they also must be very different. To write toward Brown girlhood, I gleaned from women of colour, engaging feminist theory, poetry, documentary, art, and most vitally, my daughter. The book is stitched together with the questions she asks and the statements she makes, through the remarkable ways she re-envisions the world without the kind of impossibility we often feel individually and collectively in the face of so much destruction. I drew, in other words, from the sites and sources I find most hopeful and revolutionary.

I’ve been working on a feature-length experimental documentary project called The Nest in collaboration with the amazing Chase Joynt. It is unquestionably a totally wild and all-consuming multimedia project! The documentary explores the history of a single brick and mortar home in Winnipeg in order to recast 140 years of Canadian history through the incredible lives that have unfolded there. It’s a large-scale collaborative project that links histories we don’t usually place in relation, including 19th century Indigenous women’s political activism, early education for the deaf in Canada, the internment of Japanese Canadians and its aftermaths, and late 20th century feminist climate activism. The project’s aim is to forge unexpected connections among disparate histories and identities, and in so doing to create alternative forms of belonging. Through the spaces we dwell in and circulate through, we want to explore how we are indelibly linked to other lives and histories.

Julietta Singh is a writer and academic whose work engages the enduring effects of colonization, current ecological crisis, and queer-feminist futures. She is the author of two previous books: No Archive Will Restore You (Punctum Books, 2018) and Unthinking Mastery: Dehumanism and Decolonial Entanglements (Duke University Press, 2018). She currently lives in Richmond, Virginia with her child and her best friend.

The Breaks: An Essay

A profound meditation on race, inheritance, and queer mothering at the end of the world.

In a letter to her six-year-old daughter, Julietta Singh ventures toward a tender vision of the future, lifting up children's radical embrace of possibility as a model for how we might live. If we wish to survive the looming political and ecological crises of our day, Singh contends, we must break from the conventions we have inherited, and orient ourselves toward revolutionary paths that might yet set us free.

The Breaks celebrates queer family-making, communal living, and brown girlhood, complicating the US’s stark binaries. With nuance and care, Singh connects the crises humanity faces—climate catastrophe, extractive capitalism, and the violent legacies of racism, patriarchy, and colonialism. Drawing upon feminist autotheory and the Black epistolary traditions of James Baldwin and Ta-Nehisi Coates, Singh offers us her own generous invitation to move through the breaks toward a tenable future.