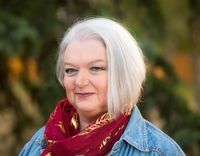 Everyone in J.E. Barnard's When the Flood Falls (Dundurn Press) is having a tough time. From ex-RCMP corporal Lacey McCrae and her old university roommate, Dee, to even the Calgary foothills town they've found themselves in, where the only bridge connecting them to the rest of the world is at risk from a swollen, icy river. The tension and stakes are high from page one, and when the investigative skills Lacey is trying to leave behind become essential to protecting Dee from a stalker, things ramp up even more.

When the Flood Falls is Banard's debut and the first in a planned series of Lacey McCrae mysteries, and it looks like Banard is very much on the right track from book one; the manuscript won the prestigious Unhanged Arthur Award for Best Unpublished First Crime Novel and now in its published form, it has been praised as "complex [and] unconventional" (Library Journal) and "a taut, high-stakes thriller that is deeply personal, internal, and psychological" (Foreword Reviews).

We're excited to welcome J.E. to Open Book today to discuss Lacey, where the title of the book came from, and her writing process as part of our Entitled interview series.

She tells us about the psychological effects of unexpected flooding, shares a fabulous short story title, and gives us the powerhouse Julius Caesar quotation from which her first title idea for the book was drawn.

My current book, When the Flood Falls, invokes the long aftermath of the 2013 Alberta Floods. In the space of 24 hours that June, five Eastern Slope waterways were filled to overflowing by heavy rains that brought down the whole winter’s snow-pack from the high peaks. These creeks and rivers surged over their old banks and permanently altered their channels. One of the towns badly hit was Bragg Creek, fifty kilometers west of Calgary. The Elbow River swelled to five times its normal width and rushed straight through the business district, damaging almost every property and washing one entire house under the main bridge before smashing it to pieces further downstream. As you might imagine, a flood of that magnitude, coming with minimal warning, leaves psychological scars in its wake.

When the Flood Falls takes place five years later, during the annual June paranoia. The community holds its breath as, for the first half of the book, the water rises. So does the danger from less visible threats. When the water levels drop, the channels have been scoured down to bedrock in places, exposing long-buried foundations, tangles of torn-up trees, old bones, and other secrets. The falling waters at first ease the characters’ fears, but then they drop far enough to reveal a single item that changes the whole course of the mystery.

A title should convey the mood of the story, and bonus points if it also has a metaphorical significance. When the Flood Falls refers not only to the physical floods – past and present – but to the flood of chaotic events that can undermine the most seemingly stable life. The three women at the heart of this novel all had careers and relationships that seemed secure, but each lost their stable footing recently: Dee through an encounter with a reckless driver, Jan to a mysterious illness, and Lacey through fleeing an abusive ex-husband. They’re already at risk from those undercurrents when the water begins to rise, and then Dee’s midnight prowler makes a deadly decision that could sweep them all away.

“Our Lady of Perpetual Construction” is a mystery short story about a trophy wife whose cathedral-sized foothills mansion will never be finished as long as tradesmen remain susceptible to her considerable charms.

I am not a fan of them for mystery or suspense novels. Apart from Rebecca by Daphne DuMaurier, which has become through the decades almost synonymous with psychological suspense’, most single-word titles convey too little to be enticing and, even in retrospect, don’t stand up well under the weight and complexity of a good crime novel.

The title I was thinking of during the first draft was Taken at the Flood but that was previously claimed by Agatha Christie. The full Shakespearean quote is “There is a tide in the affairs of men, Which taken at the flood, leads on to fortune. Omitted, all the voyage of their life is bound in shallows and in miseries. On such a full sea are we now afloat. And we must take the current when it serves, or lose our ventures.” It’s from the play, Julius Caesar, which I studied in theatre school, and some parallels between the tales might be clear to a reader on finishing When the Flood Falls.

Beyond that, when I think of the lives of my early-30s women characters, not only in this book but for the series, I see the women in my life who are living more or less permanently single, more of them than at any time in modern Western history. One bad career break or costly separation can sweep their financial stability right off a cliff. Without family or friends who can afford to help out, a single woman faces a sudden drop out of the housing market or the pension-and-benefits career path. Depending on a woman’s age and the industry in which she works, such a fall might be impossible to fully recover from before she ages past ready employability. Or, for a trophy wife, past desirability.

When the Flood Falls to me implies all of the above: the quest for power that some men expect to ride forever, the hand of friendship that betrays, the shallow eddies of the trophy wives’ lives, the tide of events – some hidden and some wide open - that sweeps the characters along. The literal flood that threatens the characters’ homes, workplaces, and access to the comforts of civilization, and the falling flood-waters that expose so much left hidden, both in the river channel and in the characters’ lives. It also implies that the flood will fall eventually. However altered are the people, the town, the landscape by that flood, a new normal will emerge. And that, I think, is the hope that floats ever on the flood.

I’ve recently turned in the second Falls Mystery, Where the Ice Falls, which takes place over the Christmas holidays in chilly wilderness northwest of Calgary. That title doesn’t have a handy Shakespearean quotation attached, but for me it’s about characters frozen in their damaging or unsatisfying lives until a missing person is found in circumstances that destroy all certainties.  There’s no way to uncover the truth but by shattering the ice that holds these characters together, or apart.

While Where the Ice Falls spends the sultry summer days in editors’ air-conditioned offices, I’m shepherding the fourth in my Maddie Hatter Adventures through sensitivity edits and plotting the third Falls Mystery.  Alternating between my frivolous YA fantasy series and the psychologically grim Falls Mysteries makes for an interesting writing year.

J.E. Barnard’s first novella, Maddie Hatter and the Deadly Diamond, was a 2016 Prix Aurora finalist. When the Flood Falls won the Unhanged Arthur Ellis Award in 2016. She lives in Calgary.

When the Flood Falls

When a phantom stalker targets her friend, Lacey McCrae’s crime-busting skills are tested to their limits.

With her career in tatters and her marriage receding in the rear-view mirror, ex-RCMP corporal Lacey McCrae trades her uniform for a tool belt, and the Lower Mainland for the foothills west of Calgary. Amid the oil barons, hockey stars, and other high rollers who inhabit the wilderness playground is her old university roommate, Dee Phillips. Dee’s glossy life was shattered by a reckless driver; now she’s haunted by a nighttime prowler only she can hear.

As snowmelt swells the icy river, threatening the only bridge back to civilization, Lacey must make the call: assume Dee’s in danger and get her out of there, or decide the prowler is imaginary and stay, cut off from help if the bridge is swept away.