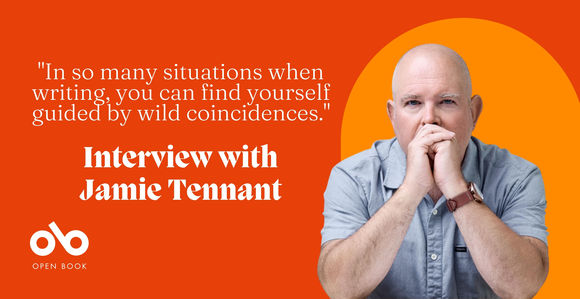 As a horror movie writer, River Black knows that strange, unsolicited objects can bring trouble with them. But when a mysterious book shows up in her mailbox, she can't resist the urge to find out more. Her quest takes her to Japan, where the book came from, and into her own past.

River is the heroine of Jamie Tennant's second novel, River, Diverted (Palimpsest Press), a taut, riveting, atmospheric novel that keeps readers racing alongside River to find the truth of both the strange book's origin and River's own fragmented memories. Exploring creativity, memory, and grief through a pop culture-saturated lens, River, Diverted is achingly honest and refreshingly contemporary, and Tennant's set building of River's expat Japanese experience is spellbinding.

Tennant, who is well known for his acclaimed weekly books and literature podcast on CFMU, Get Lit, in which he has proven himself a top-notch interviewer, joins us today on the other side of the equation, answering questions about how River, Diverted came to be.

He tells us about how a felicitous Irish translation gave him the perfect character name, how he, like his protagonist, ended up living in Japan during a period of grieving, and how his intrepid copy editor helped him find the perfect epigraph for the novel. 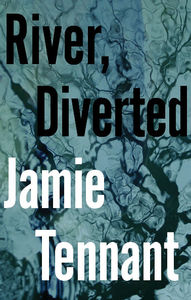 I was reading Murakami’s Kafka on the Shore in bed. I read the final page and turned out the light – and suddenly my brain started popping off like fireworks. I hadn’t written fiction in at least a decade, but this idea came so quickly I had to turn the light back on and start scribbling. It was the way Murakami just introduced the weirdest things (for example, the Johnnie Walker mascot come to life) as if shrugging and saying “Well, here you go, you have to accept this.” I wanted to do that.

For the record, the novel I started was a monster and collapsed in on itself. I salvaged one storyline and it became my debut novel, Captain of Kinnoull Hill. The other, after much more significant change, became River, Diverted.

I visited friends in Japan twice in my 20s. The first time was overwhelming and amazing; I came home and immediately started studying Japanese. The second time, like River, was after my dad passed and I was having claustrophobic panic attacks. On that trip, for the first time in months, the attacks disappeared. I was growing dissatisfied with my life in Toronto, for several reasons, so when I was offered a job at a bar called JJ International, I took it.

The experience was enormously formative. The unusual workplace, the kids we’d teach on the side, the city, the nation, the language, the culture – all these things were remarkably important to me. I’ve been back to visit another ten times, and I hosted a Japanese music show at 93.3 FM for many years.

I’ve always wanted to write about the experience, to write about Japan through the lens of that experience. I wanted to describe the pastoral scenery and the mizu shoubai side by side and to avoid cliches (hopefully I succeeded there). The problem was, how? I wasn’t a travel writer and my experiences were decades old anyway. I wasn’t going to write memoir because, well, who cares about one unknown dude in a bar? When River came to me, I was thrilled; here was a character and a plot that made sense in this context. I was finally able to write about Japan.

Monumentally! Originally it was about a young man who goes to Japan and meets a kappa, a folkloric Japanese river monster, on a hillside. Fun fact, this version of the tale exists in Kenichi and the Kappa, the story-within-a-story in River, Diverted. It is, in a lot of ways, an awful lot like my first novel, with monsters on hillsides and such.

Then I had one of those “writer moments” that sound kind of corny but are undeniably real: I suddenly realized my protagonist had to be female. From there, it was step by step. I “realized” she wrote horror movies. It all just came to me, changing everything about the book. Luckily, it came at an early stage.

Though I had a rough outline, I had no idea how the story would end. It begins with the statement “I am holding a book that cannot exist.” To not explain the book would be a cheat. How did the impossible book become possible? I didn’t figure it out for the longest time.

In so many situations when writing, you can find yourself guided by wild coincidences. When I named my protagonist “Helen Delaney” it was, honestly, a random choice of names. When I found out that “Delaney” means “black river” in Irish, it was like…how perfect is River Black for a horror writer’s pseudonym? I must be on the right track. The same thing happened with the water motif – the canals, rivers, bathtubs, etc., that fill the book. Sometimes I’d accidentally find myself writing a scene involving water, and think well, that’s obviously gonna work.

It’s probably an obvious statement but I am very fond of my protagonist, River Black. She’s goofy and funny – a little like some of my favourite people in the world. In my mind she’s much funnier than she is on the page; hopefully I managed to make her seem at least a little hilarious. She writes horror, which makes her interesting to me. At one point she mentions she has the “bass player from Goblin” as a friend on social media. That’s an obscure reference for the horror fans (Goblin scored the original Susperia amongst other things) and I love all these little details about her. I admire River’s approach to living in Japan, which was to be respectful and try as hard as possible to understand the culture. Even the things that River thinks are faults are things I find kind of admirable, in a way. I’m thinking of her over-inflated sense of obligation, and the way she always tries to befriend difficult people.

I went back to Japan on at least two research trips, though “research” is an ill-fitting word. I mostly walked around, took notes, chatted with people, and tried to see the place through fresh eyes and through my memory at the same time. What I found interesting is all the things for which we never learn words – in any language. I didn’t learn the word dobugawa – the canals that line many of Nagano’s streets – while I lived there.

I wanted an epigraph but couldn’t find a suitable one. The idea of the saying “you can’t go home again” is important to the book, but that was a bit too simple. Likewise the Japanese saying “Ichi-go, ichi-e” – or, “once in a lifetime, never again” – didn’t quite work for me either. Then my incredible copy editor, Theo Hummer, mentioned the Heraclitus quote. Somehow I had never heard it. Given that it involves a river, there was no question that I would use it. “No one ever steps in the same river twice: it’s not the same river, and you’re not the same person.”

Jamie Tennant is a writer, author and broadcast(er) director based in Hamilton, ON. He has covered music pop culture both locally and nationally. His debut novel The Captain of Kinnoull Hill was released in 2016. Jamie also hosts the weekly books and literature program/podcast Get Lit.

The book shouldn’t exist – yet here it is.
River Black found cult success writing slasher flicks but has grown increasingly disillusioned and unhappy. When a mysterious book appears in her mailbox, her life is turned upside down. River returns to Nagano, Japan, where the book originated, hoping to pay respects to old friends and revisit her past. Instead, she finds her memory is duplicitous, her reality is porous, and the mysterious book is more alive than she could have believed. River, Diverted is a dark fairy tale that explores the trickery of memory, the delicacy of friendship, the nature of creativity and the deliverance of hope. Filled with pop culture references and a deep love of monster movies, River, Diverted is both a light-hearted and subtly serious read that will captivate readers.