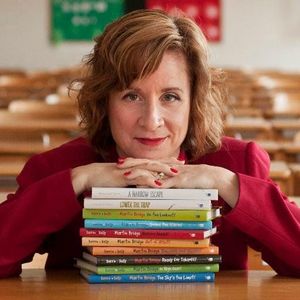 When Russell's family moves to a new house, he has a great idea: The big tree in the backyard is just crying out for an amazing tree fort. Russell's dad gamely gives it his best, and soon Russell has an actual, honest to goodness tree fort - just not the one of his dreams. When he sees a fort down the street with all the bells and whistles he imagined, Russell starts to wonder whether happiness comes from the fanciest fort or somewhere else.

The Better Tree Fort (Groundwood Books) by Jessica Scott Kerrin (illustrations by Qin Leng) is the author's first picture book after numerous acclaimed middle school novels, and her trademark humour and gentle wisdom rings pitch perfect in the new form. A witty tale about the dangers of keeping up with the Joneses, it's always fun and never preachy, grounded in relatable and lovable Russell.

Today, we're excited to welcome Jessica to Open Book to talk about Russell as part of our In Character series. She tells us about the little boy who inspired Russell, how she feels now about her early characters, and her next project, set during the early days of the Space Race.

As an added bonus, tomorrow we'll be speaking with The Better Tree Fort illustrator Qin Leng, getting the rare chance to hear about a book from both creators' points of view. Be sure to drop by Open Book tomorrow for our post from Qin!

Russell was inspired by a little boy I once sat across from on a bus in Halifax. He was with his grandfather. I was with my son, then five years old, and my husband. We were all heading from the Maritime Museum of the Atlantic to the film set for a children’s television show called Theodore Tugboat.

Theodore Tugboat was about various boats that worked the Big Harbour, a harbour that looked identical to Halifax Harbour and so children in the Maritimes felt especially connected to the characters. The star of the show was Theodore, a good-hearted and hard-working young tugboat. His cast of friends included more seasoned tugboats, a ferry, barges, and even a cabin cruiser (who never had to work). Such is life.

Anyway, the show had donated their beautiful models of all the boats to the Museum, and as part of the exhibit opening, guests were ferried from the Museum to the stage set built in the gymnasium of a decommissioned school. The models were much larger than the ones you’d find in a kit to build, and they were a bit comical. For example, Theodore wore a red knit cap on top of his smokestack. His giant eyes, located beneath the cap on the stack, could move and express his feelings.

There we sat in the bus, each of us thrilled at the prospect of meeting Theodore and his friends in real life. Imagine! And across from us sat that little boy and his grandfather. Only, the little boy had something he cradled on his lap. From our vantage point, it looked like several pieces of wood crudely fastened together. Seeing us eyeballing the object, the boy held it up proudly.

“My granddad made me this!”

Confused silence from us.

The little boy beamed. And when we looked again, sure enough, it was. The grandfather had hand-carved two-by-fours and glued them together to more-or-less resemble the shape of a tugboat. He had hammered in nails for a crooked railing. The port and starboard lights were wooden thread spools that had been painted red and green. He had also painted the eyes on the smokestack in shaky penmanship, giving the model a permanent look of surprise.

Clearly, woodworking was not his forte. But his love for his grandson was all over that model, and I could tell that the little boy wouldn’t have traded his Theodore for anything in the world, certainly not the Theodore we had purchased for our son from the Museum gift store at some expense.

I was worried that my son, a budding scientist who liked to see the world in black and white, would say something harsh, such as, “That doesn’t look anything like Theodore!”

But he didn’t. He kept quiet. Like me, he could see that that model was the result of many hours the two had spent together.

Indeed, we could all agree: his model was perfect.

I listen for names that I like or search for them in my everyday world: my son’s apartment directory, the acknowledgments at the end of a good book, the scrolling credits after a Netflix binge. If I come across a name I like, I’ll jot it down. I keep a list. Then, when I’m working on a new character, I’ll review that list for inspiration and cross off the ones I end up using.

Like many writers, I often eavesdrop. The dialogue in this story was inspired by a conversation that my son, then in high school, and his friend were having about fixing boats. The gist of it was that no matter what you did, there would always be a bigger boat. I wanted to capture that sentiment along with their conclusion that it is not worth worrying about.

Martin Bridge was my first published character, and I revisit his stories from time to time. He was surrounded by an extended cast of characters over eight books, and I like to arrange for some of them to make cameo appearances in my new work.

I like Martin. He’s a good person once you get past his self-centred outlook. I think he’ll grow up to be a supreme court judge one day.

I’m working on a middle reader that features a boy named Arno Creelman who is growing up during the early years of the Space Race (the race to be the first country to put someone on the Moon). Arno wants to become an astronomer but he suffers from claustrophobia, which threatens his career choice. I’ve already written about Arno as an old man in two published mystery novels: The Spotted Dog Last Seen and The Missing Dog is Spotted. It’s a fun challenge to work backwards by planting clues that I’ll have to deal with and make sense of in the future.

Jessica Scott Kerrin is the author of the middle-grade novels The Things Owen Wrote, The Spotted Dog Last Seen and The Missing Dog Is Spotted. She is also known for the Lobster Chronicles series and the best-selling Martin Bridge series. Born and raised in Alberta, she now lives in downtown Halifax, Canada, or on her boat, Cape Fear, during the summer months. The Better Tree Fort is her first picture book.