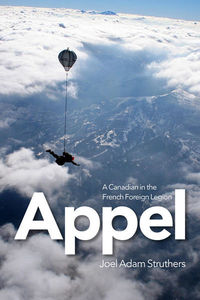 The French Foreign Legion, a branch of the French army, is one of the most famous military organizations in the world. Joel Adam Struthers tells his story of six years as a legionnaire (and more specifically as a member of the elite Group Commando Parachutistes) in Appel: A Canadian in the French Foreign Legion (Wilfrid Laurier University Press, foreword by Benoit Desmeulles).

From the rigorous recruitment process to dangerous missions and more, Struthers' account is a fascinating glimpse into modern military life. It also challenges assumptions and stereotypes about the Legion and its members, who have often been portrayed negatively in popular culture. Witty, intense, and fascinating throughout, it's a unique memoir that blends history, politics, and personal experience.

We're excited to welcome Joel to Open Book today. He is the first to respond to our newest interview series, the My Story memoir interview. He tells us about his desire to combat misconceptions about the legion, the difficulty of writing about experiences from when one was young, and the anxiety of sharing personal experiences with the whole world.

My grandfather, Major General A. James Tedlie D.S.O., had advised that I save my memories immediately upon my return to Canada. He was in the process of writing his memoirs and hadn’t kept a journal during the war, which he regretted. I took his advice, thankfully, and my experiences were typed to a Word document and left untouched for over a decade. My post-legion experiences, age, and perspective led to me writing Appel. Although my story is period, I felt a positive account from the Legion’s Parachute Regiment was long overdue. For years I had waited for something, but nothing hit the bookshelves. So, I thought perhaps it was on me to do so?

Yes – What’s the truth? Anytime my service in the Legion came up people’s misconceptions meant I had to try and educate them on the truth. However, trying to do so in a conversation was pointless, and over the years I did my best to avoid the subject. Once I decided to share my story, the writing process focused on educating an interested reader but at the same time keeping them entertained. Thankfully today I can say to anyone interested “Google Appel @wlupress for the truth”.

Yes, very much so. My memories (in Word) lacked structure and consideration for the English language. Years of rewriting, editing, and asking family, friends, and colleagues to read the story lead to a rough first draft. I eventually hired a professional editor to assist, resulting in a second draft. An effort to share a story without changing it because one is older was a challenge. Rewriting and reliving experiences allowed me to recognize how my time in the French Foreign Legion had shaped me. In addition, all the research enlightened me and led to some surprising nostalgia and an appreciation for my experiences all those years ago.

My memories were saved via laptop inside of a small portable air-conditioned trailer on a gas drilling platform in the Sahara Desert - Algeria, North Africa. Over a decade later when I started to refine those memories, I found that listening to the music I enjoyed during the stories’ period helped. The editing was done in airline economy class, the back of a bug-infested helicopter during Canada’s fire season, and small-town British Columbia, Alberta, Saskatchewan, Manitoba, and Ontario hotel rooms. However, the majority was done late into the night at home in Langley, B.C. with a glass or two of quality French red wine to accompany good music and old memories.

Friends from the regiment and Groupe Commando Parachutistes (GCP) helped to ensure my memories and facts were all correct. The research included reviewing books I had from my time in the Legion, books acquired for the purpose, and online websites to ensure Legion, military, historical, and family facts were accurate. During the final editing, pre-publisher, the professional editor I hired fact checked my efforts to ensure accuracy. In addition, with the legion’s assistance, photos from my time in the regiment were chosen to best support the narrative. A big effort went into choosing the most appropriate visuals. In turn, the narrative was shaped where appropriate in order to support visuals.

100%. This experience is foreign to me. I wouldn’t consider myself an extrovert or one to share openly. But I’m learning to do so in order to market Appel’s objective – #Educate. I’m subjecting myself to judgment notably by former and active Legionnaires, or any soldier for that matter, and also any reader. I'm not a writer per se, I’m a former Legionnaire, a soldier sharing his experiences. Time will tell how people feel about that. However, I had said to myself I would only allow the story to be shared if I had the Legion's approval and it was done by a respected publisher. If I was fortunate to have both, that would ensure the story was sound. Colonel, Benoit Desmeulles, my former commanding officer (CO) and later CO of the 2ieme Regiment Etranger Parachutistes (2REP) read the story, which ultimately led to the stories going forward and to legitimacy, which allows me to be confident in its worth.

Joel Adam Struthers is a former Legionnaire, a father, and a commercial helicopter pilot. When not preparing his children’s school lunch, he is a helicopter pilot and a partner in a Canadian risk mitigation firm that solves difficult problems in challenging environments.

Appel: A Canadian in the French Foreign Legion

Appel: A Canadian in the French Foreign Legion is the first-hand account of the author’s six years as a professional soldier during the 1990s, and his experience in the Legion’s elite Group Commando Parachutistes (GCP). Joel Struthers recounts the dangers and demands of military life, from the rigours of recruitment and operational training in the rugged mountains of France, to face-to-face combat in the grasslands of some of Africa’s most troubled nations.

Told through the eyes of a soldier, and interspersed with humorous anecdotes, Appel is a fascinating story that debunks myths about the French Foreign Legion and shows it more accurately as a professional arm of the French military. Struthers provides insight into the rigorous discipline that the Legion instills in its young recruits, – who trade their identities as individuals for a life of adventure and a role in a unified fighting force whose motto is “Honour and Loyalty.”