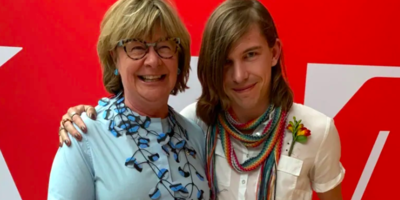 Yesterday evening in Toronto, John Elizabeth Stintzi was named the 25th winner of the Writers' Trust's RBC Bronwen Wallace Award for Emerging Writers. The $10,000 prize, which alternates between poetry and short fiction each year, this year went to Stintzi for their poems "Selections from Junebat". It's a banner year for Stintzi, who also recently won The Malahat Review​’s 2019 Long Poem Prize and who has work forthcoming in a variety of outlets including Black Warrior Review and Ploughshares, as well as a forthcoming chapbook, The Machete Tourist.

Raised on a cattle farm in northwestern Ontario, Stintzi is a non-binary writer, teacher, and visual artist. Their poetry was praised by the jury of poets ​Jordan Abel, Sue Goyette, ​and ​Emma Healey, who said: "'Selections From Junebat' is a compelling collision of content and form disrupting gender identity and reckoning with the liminal and silent space that such disruption instigates. John Elizabeth Stintzi’s poems rely on the breaking of grammar and syntactical sequences as well as a re-visioning of Wallace Stevens’ ‘Thirteen Ways of Looking at a Blackbird’ to assert an authentic identity in the speaker’s private and public life. This reckoning and reclamation of self asks readers to consider their own concepts of gender and the difficulties that are faced when gender norms are disrupted. These are brave and timely poems."

In an interview with Open Book last week, Stintzi spoke about their experience writing the manuscript from which their winning work is taken: "[these poems] instead allowed me to grapple with who I was head-on, and throughout these three poems the Junebat is a contradictory, slippery, antagonistic vessel that is filled more with questions and smoke than any myth of clarity. These poems attempt the impossible: to try and define and interrogate something which the speaker believes exists, believes they are, all the while failing to give a consistent portrayal of it—because to be honest about identity, for me, is to be honest of its inconsistency."

Each of the two finalists received a $2,500 in recognition of the excellence of their nominated pieces: Rebecca Salazar for "Your Public Body" and Ellie Sawatzky for "Unorganized Territory." Each of the nominated writers will have the opportunity to be mentored by an editorial professional in the Canadian publishing industry with a focus on writing feedback and career guidance.

The 2019 winning and nominated poems, along with featured works of past years’ honourees, are available for free download exclusively on Apple Books​.

The RBC Bronwen Wallace Award recognizes writers who are under 35 and unpublished in book form. It is supported by the RBC Foundation’s Emerging Artists Project, which encourages up-and-coming artists to help them build their professional careers. The award, which was presented at an event at Toronto’s Royal Conservatory of Music hosted by CBC Radio Broadcaster ​Shelagh Rogers​, has a strong track record of tapping the future stars of CanLit, with past winners and nominees like Michael Crummey, Sonnet L'Abbé, and Alissa York. It was established by Kingston writer Carolyn Smart in memory of her dear friend Bronwen Wallace.