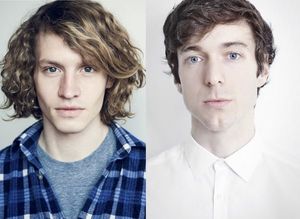 The brainchild of William Ellis and Jordan Tannahill, Toronto's Videofag, one of the city's premiere experimental art spaces, existed for four brilliant years of wildly creative performances, screenings, and exhibitions. A central and essential space for queer artists especially, it was a unique spot that welcomed some of the city's most exciting creators.

While its run ended in 2016, when Ellis and Tannahill (who lived in the space together) separated, its impact and legacy demanded a proper requiem, which came to be in the form of The Videofag Book (BookThug).

The book draws on many voices in addition to Ellis and Tannahill, including Jon Davies, Chandler Levack, Greg MacArthur, and Aisha Sasha John, and includes letters, photos, a play, and much more.

We're excited to welcome William and Jordan to Open Book today to discuss the book and the legacy of Videofag. They tell us about the value of the ephemeral, how their time together as a couple helped the creative process of writing the book together, and what is next for both of them.

The Videofag Book is a collection of photos, essays, and reflections about Videofag, a storefront arts space in Kensington Market that we ran and lived out of from 2012 - 2016. So much of what made Videofag special was ephemeral — the energy of a great party; a revelatory moment in a performance; an intimate conversation over candlelight in our kitchen. But we also wanted to find a way to capture, for posterity, what the space was, and what it meant to the people who used it. Over four years we took thousands of photos, engaged with hundreds of artists, and hosted numerous events, so we had a lot of material to draw on!

One of the central questions was: how do you capture, in a book, the myriad of voices and perspectives that informed what Videofag became. The space was so much more than just the two of us; it was a space for a community. So how do we include their voices in the book?

We talked for a few years about putting this book together, and then Hazel and Jay at Bookthug said they would love to publish it, which is really what made the book a real thing. As we worked it kind of just kept growing and growing and we wanted everyone to be included in it. At some point we decided we have to have photos, which started with like, fifteen or twenty. I think there’s close to eighty now!!

What do you need in order to write in terms of space, food, rituals, writing instruments?

Definitely a deadline. Also, when we lived in the Videofag space, we would spend a lot of time working in the storefront window, as people passed by and looked in from the street. It helps to have an audience.

While writing our portion of the book, we would just email each other ideas and suggestions back and forth, so that helped unblock any creative logjams. After five years of being a couple, we’re pretty good at telling each other what we think. No mincing of words. And lots of love helps.

A great book reveals something intimate and honest about the author and leaves you with a feeling of having connected to this world they’ve created. A couple of favorites would be Anne Carson’s The Autobiography of Red, and Just Kids by Patti Smith. We saw ourselves in those books and in that way we wanted to bring the reader inside the Videofag space, bring them backstage and into our relationship.

Well, Jordan will be releasing his first novel with House of Anansi in late January 2018. It’s called Liminal. Will has a number of performance projects in Toronto that he is working on throughout the year.

William Ellis is a performer whose work in theatre and dance includes Other Jesus by Evan Webber, Even This Old Town Was a Forest by Aurora Stewart de Peňa, WorkingOnWorkingOnUs by Andrew Tay, S h e e t s by Salvatore Antonio, and Greg MacArthur’s A Man Vanishes. He has performed for choreographer DA Hoskins in Machine Room, The Coating Project for the Luminato Festival, and This is a Costume Drama at Harborfront World Stage. Recently he received a Toronto Theatre Critics Award—Special Citation for Videofag, an ongoing collaboration with Jordan Tannahill.

Jordan Tannahill is a playwright, filmmaker and theatre director. He won the Governor General’s Award for Drama for Age of Minority: Three Solo Plays and was shortlisted for the prize again for Concord Floral (also a recipient of the 2015 Carol Bolt Award). He has twice received Dora Awards for Outstanding New Play while his play Botticelli in the Firewon the 2017 Toronto Theatre Critics Award for Best New Canadian Play. He is the author of Theatre of the Unimpressed: In Search of Vital Drama and his first novel, Liminal, will be published by House of Anansi Press in Januaray 2018. Jordan’s films and multimedia performances have been presented at festivals and galleries such as the Toronto International Film Festival, the Art Gallery of Ontario, and the Tribeca Film Festival. Most recently, his virtual reality performance Draw Me Close, a co-production between the National Theatre (UK) and the National Film Board of Canada, premiered at the 2017 Venice Biennale.

In October 2012, lovers William Ellis and Jordan Tannahill moved into a former barbershop in Toronto’s Kensington Market neighbourhood and turned it into an art space called Videofag. Over the next four years Videofag became a hub for counterculture in the city, playing host to a litany of performances, screenings, parties, exhibitions, and all manner of queer fuckery. But hosting a city in their house took its toll and eventually William and Jordan broke up, closing the space for good in June 2016.

The Videofag Book is a chronicle of those four years told through multiple voices and mediums: a personal history by William and Jordan; a love letter by Jon Davies; a communal oral history compiled by Chandler Levack; a play by Greg MacArthur; a poem by Aisha Sasha John; a chronological history of Videofag’s programming; and a photo archive curated by William and Jordan in full colour.