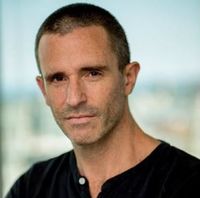 Journalist Robert F. Delaney has been covering China for major news outlets since 1995, so when he was crafting the setting for his debut novel, The Wounded Muse (Mosaic Press), he had decades of experience to draw on. Set during the lead-up to the 2008 Olympic Games, The Wounded Muse follows Qiang, who returns home from Silicon Valley to find his city in turmoil; entire neighbourhoods are being dismantled, all in the name of presenting a modern version of China to the world.

Qiang's response to the upheaval - a documentary addressing the disappearance of affordable housing - lands him in hot water and leaves his American friend Jake desperate to help him. As the situation becomes increasingly dire, Jake is forced to accept assistance from dubious sources. A tense and psychologically driven tale, The Wounded Muse asks essential questions about government control, large scale change, and the idea of opportunity in times of transition.

To celebrate the publication of The Wounded Muse, we asked Robert to share with us about the books that have shaped him as both a reader and a writer through our WAR: Writers as Readers series. We're excited to welcome him to Open Book today as he tells us about the book that first taught him about the intricacies of friendship, recommends the book that most influenced his understanding of China, and shares an important point from an inspiring Wayson Choy novel.

The WAR series: Writers as Readers, with Robert F. Delaney:

Flesh and Blood by Michael Cunningham. There’s scene where one of the central characters, as a child, is forced by an overbearing father to sit at the dinner table until he finishes eating his meal, and he ends up seated there until the next morning. The confrontation said so much to me about how we’re forced to conform with societal imperatives that don’t work for many of us. I didn’t cry at this point in the book. It wasn’t until, 300-something pages later, after this character grows up, realises he’s gay, goes through many transformations, and ultimately assesses all of the good and bad that led his to where he ends up as an adult that the floodgates opened.

A Separate Peace by John Knowles. A book about jealousies and resentments that can lay just below the surface of the closest of friends. It shows better than most books how friendships can become destructive rivalries.

The Hitchhiker’s Guide to the Galaxy by Douglas Adams. The first book I read on my own, one that wasn’t on my middle school required reading list. Nothing about this book was like anything I had read previously. When I got to "Ode to a Small Lump of Green Putty I Found in My Armpit One Midsummer Morning", a poem by Grunthos the Flatulent, a Poet Master of the Azgoths of Kria, I couldn’t stop laughing. I hadn’t yet been exposed to the Western literary classics or any of the scholarship that would allow me to appreciate how funny this reference is, but it hit me so powerfully I curled up on my bed, clutching my gut in fits of laughter.

The Unbearable Lightness of Being by Milan Kundera. This book puts the delicacy of personal relationships up against the backdrop of brutal geopolitical movements in a way that no other book I’ve read has done.

River Town by Peter Hessler. From what I understand, this book is a must-read for anyone trying to understand the socio-economic changes taking place in China. Many people well versed in all things China describe this book reverentially, so I have no doubt that it’s a good read. And Hessler’s not the only "China hand" to have written a strong text about the country. Something holds me back from reading them. Perhaps I have a subconscious aversion to these books because I don’t want them to influence how I write about the country.

Generation X: Tales for an Accelerated Culture by Douglas Coupland. This is what I consider to be the first multi-media book, and it celebrated characters who were happy to wind up as bartenders at a hotel in Palm Springs, California despite their intelligence and wit. An understated yet devastating take-down of the yuppie culture of the 1980s, this book said it was okay to reject it all in the same way that the beat writers did in the late 1950s. And you could laugh along. When I was seventeen, I felt like I’d need to have a BMW by the time I was 25 even though something seemed very wrong about that. Coupland set me straight.

The Woman Warrior by Maxine Hong Kingston. Amy Tan’s Joy Luck Club gets most of the attention when it comes to well-written novels offering insights into Chinese culture. While Tan offers a window, Hong Kingston provides a mind meld with characters struggling with the histories and ghosts of a culture that is so much more than anything you’ll learn from other revered books about the country. I didn’t start to understand China until I read this book.

The Jade Peony by Wayson Choy. I don’t wonder why this book is on the reading lists of many Canadian schools. Anyone angry about how the Chinese community has driven up real estate prices in Canada needs to read this book. There are the entirely debatable issues of birthright tourism and billionaire "teachers" from Mainland China bidding property prices up to astronomical levels. However, Choy’s masterful novel shows how the Chinese community in Vancouver is as Canadian as Scots, Brits or Irish in Ontario or Nova Scotia.

Robert F. Delaney has been covering China as a journalist for Dow Jones Newswires, Bloomberg News, and South China Morning Post since 1995. Many of the themes for The Wounded Muse – Robert’s first novel – were first developed in Route 1 to China, a collection of short stories that won Robert “First Runner Up” in the University of Toronto Penguin Random House Creative Writing Competition in 2012. Robert splits his time between New York City and Toronto.

Qiang returns to his homeland of China from Silicon Valley to find Beijing undergoing a chaotic transformation in the lead up to hosting the 2008 Olympic Games. Wrecking balls are knocking down entire neighbourhoods to make way for new structures more in line with the government’s vision of a modern China. The tumult inspires Qiang to shoot a documentary about the loss of affordable housing, which draws the attention of public security officials. When Qiang is suddenly arrested by local police, it falls on his friend Jake, an American journalist who admires Qiang and his work, to try to figure out how to end the detention.

With few options, Jake enlists the help of those he’s not sure he can trust. Dawei, a Chinese itinerant Jake befriended years earlier, returns to Beijing in the midst of a cat-and-mouse game Jake is playing with the authorities to retrieve a memento that has suddenly become extremely valuable. Dawei becomes ensnared in a plan to force the authorities to release Qiang, and Jake must then decide who survives.

Based on real events, Robert F. Delaney’s The Wounded Muse takes readers to a city and country undergoing a transformation on a scale previously unseen, where in the shadowed wreckage of forgotten communities people are pushed to psychological extremes to secure their position. In a society that promises endless opportunity, and unknown risks along the way, many end up defeating themselves.