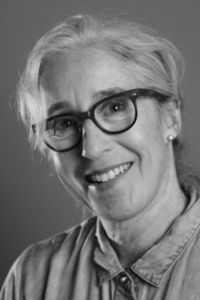 Who says it's impossible to be serious and hilarious at the same time? Julie Bruck proves that it can be done with her daring, inventive, witty, and gutsy How to Avoid Huge Ships (Brick Books), a collection as unique as its title.

It's the Governor General's Literary Award winning poet's fourth collection, examining "the long slide" of time and the darkness, humour, and absurdity of aging, learning, and moving forward through time in this strange slice of history we inhabit. Bruck has been praised by Seán Kennedy as "the poet laureate of aftermath, of what we do in the wake of things" and by Sharon Thesen as "[a] smart, mature talent [with] wide-angle vision."

We're excited to welcome Julie to Open Book to tell us how she first came to poetry and laid the groundwork for her acclaimed career. She tells us about the beauty in a forgotten grocery list, how a collection becomes its "own discrete organism", and the out of print gem she recommends tracking down.

Strangely, I don’t remember one particular poem’s effect on me as a younger reader (although there were clearly, many of them). When I really started feeling “changed” by reading poems was as a graduate student at Warren Wilson’s MFA Program for Writers. It was then—in my mid 20’s—that I learned to read poems for not only what they do to the reader, but how they do it. In other words, the experience of the poem became much more than its “takeaway.” The way a poem moved, or its dramatic shape, became an integral part of the experience of reading, and part of what made it memorable. One poem that lodged itself deep from that time was Philip Larkin’s “Coming.” I memorized that poem without setting out to do so. It inhabited me.

I love found (or lost) material. I can break my own heart reading a grocery list someone has left in a grocery cart — that discarded bit of what it is they wanted. That killer, past tense.

There’s a poem in Huge Ships that actually started from a radio traffic report concerning “an ottoman in the left-hand lane.” Found material so often leads to completely unanticipated poems, and those are the ones I most like to write—poems that seem to have their own agendas, quite independent of my own.

One found source I have yet to use, but read regularly with glee, is nextdoor.com. It’s a network of local social media boards that brings out both the best and worst in civic attitudes. Not long ago, a woman posted an earnest inquiry asking whether anyone else had been seeing the “little people,” by which she meant elves and fairies in the neighbourhood. She went on to describe their behaviour in great detail (they hide between houses). I’ve transcribed the entire thread that ensued, and while I haven’t made anything from it yet, when I do get to that poem, I have no idea what to expect.

With all four books, I’ve started with stand-alone pieces, although there’s a point in that gathering process where I often add or drop, revise, or even write new poems to serve an emerging book’s thematic or tonal through-line(s). At that point, I find (or hope!) the book starts to become its own discrete organism, and I’m ready to sacrifice (or create) parts for the whole.

For Huge Ships, I’d originally chosen a very different working title and an over-determined theme, so it was a great relief to let those go, and instead, keep at the writing for an extra year, letting the poems dictate what the book would become.

I’m not sure I have the temperament for a “project” collection. I may be too much of a magpie. But who knows? I’m (almost) always writing poems, and what’s next in terms of a book is, happily, still wide open. Meanwhile, some of the best new books I’ve read are highly focused “projects.”  There’s fierce, beautiful work coming out of this fraught and racialized time in the U.S., particularly from writers of colour. Patricia Smith’s “Incendiary Art” (2017) is just one example among many. That is one stunning book.

I worry it like a dog with a battered squeaky toy. Or, to switch metaphors, I take it down to the studs and start over. I may be the least Buddhist writer ever, in that regard. My working method seems to be an uneasy alliance of wild impatience and glacial slowness.

In theory, I believe in putting a stuck poem aside and coming back to it later, but in my own practice, I’m not so sure. Unless the poem goes into a file that daylight reaches (say, an open basket within an arm’s length of my desk), it’s gone to a dark, dark drawer, and may never see light again. I have boxes of those poems. I’m sure the silverfish are having a party in there.

As with the front and back of the cow, I’d wager both matter equally. An effective opening must beckon the reader by whatever means, making them want — no, need — to keep reading. A good ending is one in which the reader actively takes part, and may even keep connecting the dots for her or himself after the poem has ended. That kind of closure doesn’t shut down the experience of unwrapping the poem, but rather, extends it. Poems with long tails! Those are the ones I read and then sift in mind, when I can’t sleep.

I just reread a 2012 book by Alan Shapiro, Night of the Republic. It’s partly made up of poems set in empty public spaces at night, and each carries so much meaning about the nature of America as a whole. He also juxtaposes those poems with more personal, autobiographical material, but the latter is often rooted in particular historical American moments, so the book has a wonderful weave of the personal and American “civic” culture. It’s an exquisite book of solitudes. My idea of a good time.

Last time I checked, Night of the Republic was out of print, but there were used copies available from online booksellers. I say, run, don’t walk! I can’t imagine a book more worthy of reprinting, especially in the current — ahem, now there’s an ironic euphemism! — climate.

Like the front and back of the cow, it comes out even.

Julie Bruck has published three previous collections with Brick Books, most recently, Monkey Ranch, which received the Governor General’s Literary Award for Poetry in 2012. Recent work has appeared in The New Yorker, Best Canadian Poetry, The Academy of American Poets’ Poem-a-Day, Plume, The Puritan, Hazlitt,and The Rusty Toque. A long-time Montrealer, she lives in San Francisco. How to Avoid Huge Ships is her fourth book of poetry.

How to Avoid Huge Ships

Both “grave and brave, serious and hilarious”—new poems from a Governor General’s Award–winning poet.

How to Avoid Huge Ships, Julie Bruck’s fourth collection of poetry, is a book of arguments and spells against the ambushes of time. Parents grow down, children up, and it’s from the uncomfortable in-between that these poems peer into what Philip Larkin describes as “the long slide.” But what if we haven’t reached the end of the infinite adolescence we thought we’d been promised? We’re still here in this world of flying ottomans, alongside a middle-schooler named Dow Jones, and the prehistoric miracle of a blue heron’s foot. We may be afraid, but we’re still amused—sometimes, even awed.

Looking squarely at the way things are, glossing over none of the absurdities and injustices of contemporary life, Julie Bruck pays ardent attention to it all. The touch is light, even when the subject is heavy. One has a steady sense of being trusted to catch and feel the intangible muchness housed in these deceptively direct poems.