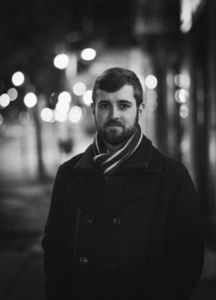 You can almost feel the dusty air of Currie Township in Daniel Perry's stories. The desire to escape the rotting barns and crumbling roadways is palpable, and captured viscerally in the character of Mike Carrion, around whom the 17 linked stories in Nobody Looks That Young Here (Guernica Editions) revolve. From a fateful car crash long before his birth to the friends who make it out to the new and different challenges of city life, the stories are poignant, deft, and memorable.

Author Farzana Doctor praised the collection, saying "Nobody Looks That Young Here hooks the reader from page one... This book made me want to get into the car, travel along Highway 402, and find Perry’s small town."

We're excited to share the news that Daniel will be our July 2018 writer-in-residence, contributing posts to Open Book through the whole of the month. You can check out his thoughts and his unique voice on the writer-in-residence page starting in early July.

To get to know Daniel a little better, we asked him to take on our WAR questionnaire: the Writers as Readers survey, which asks authors to share the books they're reading, the books they've loved, and the books that shaped them as writers. Daniel tells us about the book he would give to his seventeen-year old self, the iconic story collection that left an indelible mark on him as a writer, and his upcoming encounter with Sirius Black.

The WAR Series: Writers as Readers, with Daniel Perry:

I couldn’t be sure, but I’m going to say The Client by John Grisham. I read his first six or so books and about the same number of Tom Clancy’s somewhere between grades six and eleven.

I can only think of a few books I’ve re-read even once: The Grapes of Wrath, Of Mice and Men, Le Petit Prince, Notre-Dame de Paris, Death in Venice, The Great Gatsby, Heart of Darkness (I’m pretty sure) and recently, That Was Then, This Is Now by S.E. Hinton because it was a long-ago inspiration for my newest book. Otherwise, I’m always looking to read something I haven’t read before.

All the books! Lately, though, Moby Dick, The Corrections, and The Three Musketeers seem to be stalking me. I’m also two-thirds of the way through Great Expectations right now, which has been on the list a long time.

A Prayer for Owen Meany, by John Irving. My seventeen-year-old self was just dipping his toes into semiotics thanks to his favourite English teacher, but later went on to recoil at most of the literary theory on offer during both a B.A. and an M.A. in literature. Meany was one of the few novels I succeeded in reading over those years that wasn’t on a syllabus, and I think the way I fell for its direct style, simple story and deep well of empathy was an early warning sign that I didn’t want spend my life reading in the academic way as much as I wanted to write my own fiction. I don’t regret my education at all, but I’m a bit curious what younger me might have done had he let himself enjoy more good stories as just good stories before joining the charge to slot them all into their contextual boxes.

The Things They Carried, by Tim O’Brien. This may have been the best book I read that was on a syllabus—and in an Information and Media Studies course, not an English one, I should(n’t) note. The narrator is a traumatized Vietnam veteran trying to come to terms with what he saw, did, and didn’t do in the war and his life since, and the wrestling match with the mediating voice and the way to tell the stories is often itself a central part of the stories in the collection.

Years after reading it, I heard second-hand that when O’Brien teaches—which he’s done right here in Toronto, at Humber School for Writers—he counters the maxim “show don’t tell” with “show when you need to show, tell when you need to tell”. I think I write in a rather tell-y (or maybe, confessional) way, particularly in Nobody Looks That Young Here, and hearing that a writer I look up to might think this approach is okay was actually quite encouraging. I write a lot in the first person, and when I do I have to imagine the telling quite literally: Why would someone tell this story? How would they do it? How would they feel as they did it? There’s usually a self-awareness in my narrators, too, an inner critic who steps out from time to time and kind of calls B.S. on what they’ve just said.

The influence probably isn’t obvious, and I can’t say it was conscious, either, but I don’t know that I’d have licensed myself to use the style I like to use had I not read O’Brien’s stories.

Rebecca, by Daphne du Maurier. Her selection of details is extraordinary—in any given chapter, she’ll mention a handkerchief or a photograph in passing, and while enough readers might not notice or might even let themselves skim some descriptive passages, I found myself remembering every item she mentioned and expecting it to prove relevant in future chapters, which it nearly always did. It’s a rather long book, but it nevertheless felt like one where every item, every action, every word mattered. I don’t often feel that way about longer, description-heavy novels.

Harry Potter and the Prisoner of Azkaban. I was a little too old for the books in the 1990s—or so I thought—but like most of the literate world, my wife is a big fan, so I’ve been making a point of catching up, one volume a year, kind of like when they were initially released. I’m hoping to finish the series before we have kids old enough to read them.

Daniel Perry’s first short fiction collection, Hamburger, was published in 2016. His stories have been short-listed for the Carter V. Cooper Prize and appeared in publications in Canada, the U.S., the U.K., and the Czech Republic. He has lived in Toronto since 2006.