Ottawa-based Nakawe graphic novelist and poet NShannacappo knows how to tell a story in myriad different forms, using art, verse, and dialogue to weave compelling tales that take in everything from alien wars to the internal epics of domestic life. His debut feature length collection, Through the Eyes of Asunder (Kegedonce Press) shows that skill of balancing and conversing, asking and daring as he explores grief and healing, terror and heroism.

As comfortable crafting the voices of angels and monsters as he is wryly engaging with a quiet moment of hope, Shannacappo's voice is singular and refreshing, with tight lyrics and sparkling wordplay that shines in a collection that is ultimately uplifting without shying away from complex concepts.

We're thrilled to announce that he will be joining us at Open Book as our June 2022 writer in residence. During his residency, he will share original essays on our writer in residence page, with an open platform to discuss the aspect of the writing life about which he is most passionate.

Today we get to speak to him about Through the Eyes of Asunder as part of our new Line & Lyric interview series for poets. He tells us about writing a whopping 1500 poems before setting out to put together his collection, about how social media is sometimes part of his writing process, and about why rhythm, form, and flow guide him more than rigid form while he writes. 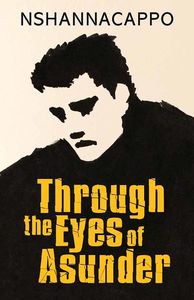 A combination of both, I started writing poetry in high school and had about fifteen hundred or so poems at the time I decided to put the first version of this collection together. I was twenty something at that time. I began editing and narrowing the poems down to a few hundred and that became the first draft. Over the years I added poems and took some out, that didn't fit the overall story of the book.

I shared them with friends and my family of choice, some of whom are writers themselves, most of us are creative types. Eventually I met an editor and writing mentor who taught me a massive amount about the art of writing. Every writer can use a mentor to help them focus their work, and bring their characters and stories to even greater life so for that I'm very thankful for my mentor. Since then I've kept writing, and eventually I shared my poetry in public forums through open-mic nights and protest events. Then of course came social media posts and online poetry groups and pages, always getting feedback that more often than not improved the quality of my writing.

Hmm, I think both are equally important and paradoxically the opening is more important only so much that you need to first capture the reader’s attention so they want to get to the ending. With the ending you want to leave the reader with both a gut punch and reason to come back and read more of your writings. I think I may have flip-flopped there, but it's a difficult question to answer, but I'm going to have to stick to my first answer that the beginning is more important.

Do you find social media fits into your writing process at all? If so, how?

For me it's mostly a cathartic thing – I write new poems and post them, sharing them with my audience because like this collection I want to show people that they're not alone in how they feel; that we're all connected. I don't always post what I write, some of them I save for myself to work on them again later because they're not finished or because I'm not ready to share it.

Most to the time it's just me writing the poem and speaking through it, but there are poems that tell stories and in those a character narrates. Depending on the poem the speaker is the protagonist or an observer of the story. Navriss is one character that comes out in a bunch of poems, I'm not sure where that character came from, but he's been with my imagination for a number of years. There's the nameless character from “The Edge of the World” poems and that guy was born of my need to express my fears and regrets and to tell a story that forms the basis of the idea behind “Asunder”. Something that was once broken, that character travels through being broken and into someone who heals or rather comes to terms with having been broken, if not healed.

For you, is form freedom or constraint in poetry?

I'm not a big fan of “form” when it comes to poetry, I think it's restricting and can prevent you from truly expressing how you feel in your writing, but I do admire those that can write and convey powerfully in form poetry. It's not something that I've practised to any great extent, I have always preferred free verse which is a style of form poetry of course with its own rules, but I tend to gravitate towards the breaking of rules. I try to write with the idea of being as descriptive as I can be while using the natural rhythm and flow of the individual words to aid the reader in following and feeling the emotions in my writing.

NShannacappo is a Nakawe graphic novelist and poet from Rolling River First Nation in Manitoba. He's Eagle clan and currently living, working, and playing in Ottawa. You can find his stories in the Indigenous anthologies called Sovereign Traces - Not (Just) (An)other, Vol 1 and Sovereign Traces – Relational Constellation, Vol 2. The graphic novel Mashkawide'e (Has a strong heart) was published by Senator Kim Pate and copies can be found by contacting her office. Neal published his own creation, The Krillian Key, in November 2020, and is working on If I Go Missing which is being published by James Lorimer & Company Ltd., and Niikaniganaw (All My Relations), commissioned by a group of healthcare researchers.

Through the Eyes of Asunder

From epic ventures into mythic and fantastical tales to the everyday trials of getting the laundry done, NShannacappo’s debut poetry collection follows many journeys through darkness to hope, healing and heroism. Pure and hauntingly beautiful turns of phrase sound out in the voices of angels, monsters and demons, mythic characters, and the sometimes wry, sometimes grieving voice of a man once broken in heart, spirit, and mind. Through the Eyes of Asunder begins and ends with hope, and takes the reader through sorrow and sadness to bright moments of happiness and love.