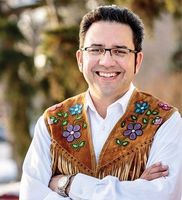 With his impressively prolific and genre-spanning resume (including 1996's now-classic novel The Lesser Blessed), one could safely assume that critically-acclaimed author Richard Van Camp is usually working too hard to do much ruminating on his past. This year, however, marks the 20th anniversary of Angel Wing Splash Pattern (Kegedonce Press), Van Camp's debut collection of short fiction, and a new edition of the book has been released to celebrate the occasion. Featuring additional material, a new introduction, and a re-designed cover, it's a must-grab for fans both new and old.

His first foray into short fiction, the stories in Angel Wing Splash Pattern explore themes of grief, community, and resilience with Van Camp's trademark mix of humour and tenderness. Following the lives of his characters as they navigate individual paths towards a place of spiritual purpose, readers of Van Camp's later books will also recognize a few names making their first appearances here.

We're thrilled to have Richard at Open Book today, where he discusses the spellbinding nature of great short fiction, the emotional rollercoaster of Angel Wing Splash Pattern's early reviews, and why writers can't help but revisit familiar themes.

Listen to a CBC reading of the story "Sky Burial" here (narrated by Ben Cardinal), and a reading of "The Uranium Leaking from Port Radium and Ray Rock Mines is Killing Us" here.

Angel Wing Splash Pattern was my first short story collection. Kegedonce Press publisher and editor Kateri Akiwenzie-Damm took the fourteen short stories I submitted and chose the ones that made it into the first edition twenty years ago. When I asked her why she’d left out the stories she did, she explained that I was exploring the same themes in several of the stories and, therefore, those double-dipping on the same theme could be saved for my next collection. She was right. Writers are often living and investigating, mining, processing, and sifting through the themes they write about (bullying, redemption, revenge) over and over. Several short story collections and twenty years later, I think about her words all the time.

Short stories are these swirling galaxies, all perfect in their own way. When I think of the short story writers I adore (Raymond Carver, SJ Bernstein, Bill Gaston, Lee Maracle, Leif Gregersen, Rachel Qitsualik-Tinsley, Lisa Bird Wilson, Jordan Harper, Kevin Hardcastle), those writers, their stories, those perfect universes, are swirling inside me all the time. I can remember the feeling of reading a short story more often than a novel. Maybe it’s the tiny heart-bomb size of them. Maybe it’s the spell I’m under for a while as I read them. That’s my wish for the short stories that have chosen me: that those Van Camp spells, those swirling Van Camp universes, spin their way through their readers forever.

I remember receiving a horrible review in The Georgia Straight right after Angel Wing Splash Pattern came out. I was devastated, embarrassed, and surprised. This was a complete slap to the face, as when I reread it after it was published, I knew I had earned every single word in the collection. But there I was: my first short story collection out (Yay! Wa hoo! We did it!) with a horrible review (Ummm, well what do we do now?). So that sucked. A few months later I was up in Yellowknife, and I woke up with this urge to buy The Globe and Mail. Who buys The Globe and Mail on a Sunday? Rich people do, and I was not rich at all. But I had this urge. I practically woke up in a handstand thinking about it. So, I went and bought a copy, came home and all of a sudden there was this great starred review in The Globe and Mail singing praise for the collection. I cheered and gave thanks because I knew we’d worked so hard on this collection and had curated such a force with the grace and beauty of the stories. They were arranged by Kateri in such a way that Angel Wing Splash Pattern is a journey of the soul in spirit soaring through lives in the North, exploring the lives of Northerners on their sacred way--some as sacred clowns, others as wounded healers. I am so proud of this collection and so grateful for Kateri Akiwenzie-Damm and Renee K Abram at Kegedonce Press for choosing it. I’m also grateful to the late great Tim Atherton for our cover photo. I look forward to holding, reading, and swooning over the 20th edition, the 40th and, hopefully, the 50th because so many of these characters have found their way into my other short story collections and graphic novels (Torchy, Sfen, Snowbird, Larry Sole from The Lesser Blessed, etc.) We have earned every single word to create these gorgeous spells, and that is my wish for my books and stories.

Richard Van Camp is a proud Tlicho Dene from Fort Smith, NWT. He is the author of 24 books in just about every genre. His novel, The Lesser Blessed, is now a feature film with First Generation Films and his graphic novel with Scott Henderson, A Blanket of Butterflies, was nominated for an Eisner Award in 2016. You can visit Richard on Facebook, Twitter and at www.richardvancamp.com.

Angel Wing Splash Pattern celebrates Richard Van Camp's 24-year career as one of Canada's most prolific and award winning best-selling authors. This collection of hilarious and profound stories is where we meet Torchy, Sfen and Snowbird in "Mermaids" and this is where we see Larry from The Lesser Blessed in his epic short story "How I Saved Christmas. " There is pain in these stories and there is loss. There is death, but there is also rebirth, and there is always the search from each of the narrators for personal truth. The voices, secrets, and communities across the north and the south are all linked by themes of hope, the spirit of friendship, and hunger. This 20th anniversary edition of a Canadian Indigenous classic contains additional material, including a new story, a new introduction and cover. Richard has gone on to publish four other short story collections, but Angel Wing Splash Pattern is where Richard's love for the short story first premiered.