The western suburbs of Toronto might not seem like an obvious spot to inspire a poet, but Keith Garebian turns the Lakeshore Road area of Mississauga and Etobicoke into something meditative and striking in his ninth collection In the Bowl of My Eye (Mawenzi House).

Weaving together concepts of place and identity, Garebian creates a kind of clarity rarely seen, exploring landscapes both physical and emotional with equal wisdom and insight. The topography of the suburbs—the mall, the apartment, the park and parking lot—are given space and attention more often reserved for the bucolic or grittily urban. Life and language vibrate with urgency on these pages, with the diversity of life outside of a downtown bubble uplifted and examined with the attention it deserves. Astute, elegant, and unsentimental, Garebian's voice is a gift for readers.

We're excited to speak with him today about In the Bowl of My Eye, as part of our new poetry-focused interview series, Line & Lyric, where we dive deep with writers into their newest collections.

He tells us about how he was "fed up with nature poetry" and carved out a new approach to the genre, tells us about the iconic poet whose quotations precede each section of the book, and shares the valuable and practical advice he has for emerging and aspiring poets.

Tell us about this collection and how it came to be. 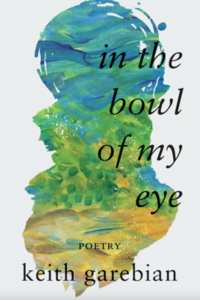 Like many other poets, I was fed up with nature poetry in its manifestations as observations to inspire reverence, awe, mysticism, or piety. I didn’t want to read any more celebrations of skylarks or daffodils, butterflies or seas of grass, of limited responses to the natural environment. Nor did I want to read or write militant environmental poems. For me, the best nature poetry combines the sensory and the meditative or reflective, but I had avoided writing such poetry for most of my poetic career, which really totals no more than two decades. Living in Mississauga, directly opposite lake, park, and off a long road connecting several towns, cities, or boroughs, I certainly had ample raw material, compounded by people and strangers I either encountered directly or observed from an objective distance. Besides having lived in my suburb for a long time, I had more than enough prompts and launching pads for an intimate, personal exploration of my connections to the geography, history, and sociology of the area.

I wanted to avoid easy sentimentalizations and familiar tropes in nature poetry, and not write about nature as science but to offer scenes from real life with real human gestures. I wanted to write nature poetry linking my nature to the external, so that a reader could read inside me.

I do choose my book titles carefully, but sometimes they suggest themselves. In this case, I deliberately combined images of eye and bowl to suggest observation, perception, transparency, and roundedness or a circle. I am the seeing eye, but this does not mean I see everything. We are all limited by what and how much we can see, but what I most wanted to see, understand, and express were connections between outer and inner. By circumscribing myself by a place that is so much larger than the micro, I am cognizant of some aspect of the macro. I try and get as close as I can to nature and to people, without pretending to be omniscient.

In this collection, I begin with the specifically human via portraits, vignettes, anecdotes of suburban characters, then move to specifics of place, personal relationships within this place, and then circle back to my role as reflective poet in a sequence of existential realities, especially in the longer poems.

There is always research involved in my writing of poetry collections. The amount and nature depend on the subject matter and my approach to that. Apart from researching the history of Lake Ontario in the Etobicoke/Mississauga area, and the history of Marie Curtis Park and the development of my suburban area, I researched a lot of so-called nature poetry. Taking an overview in this case, I can list Wordsworth, Walt Whitman, Jack Gilbert, Donald Hall, Mary Oliver, Tommy Pico, Lorna Crozier, Anne Carson, Jim Harrison, and many others. I happen to be a voracious reader, but in this case, I was able to use Whitman as my binding agent in a way I had not suspected earlier. Each section of the collection is preceded by a quotation from the Whitman of “Song of Myself.”

I tend to write sequences of poems that are meant to build a collection. That is why only a few of these poems work best as stand-alone poems. Most of them are designed to work as part of a whole. I did that with Frida: Paint Me as a Volcano, Blue: The Derek Jarman Poems, Children of Ararat, Georgia and Alfred, and Poetry is Blood, though in those cases, I was using the device of mask or persona, and speaking in the imagined voices of either the title characters or giving voice to objects, ghosts, historical and family figures, etc.

What advice would you give to an emerging or aspiring poet?

Read as many good poets as you can, and keep notes on some of their images and lines. Also keep notes from daily experience. Write on different themes and in as many ways as you can.

Never worry about having a signature or single style. There is virtue in versatility. Find another good writer or a sharp reader who can critique your work or give you an articulate reaction to it. You can learn a lot from astute criticism. Don’t be disheartened by negative criticism. All writers can fail, but remember what Samuel Beckett advised—and now I am simply paraphrasing roughly: keep writing, and keep failing, but fail better.

I am deep into researching the life and art of Ruth Asawa, a celebrated sculptor of Japanese-American heritage. Her life and art encompass such subjects as racism, internment, hardship, chauvinism, aesthetics, etc. Regarding my choice of subject, I never suffer from the usual Canadian cringe over nationality. I am a writer, not a bureaucrat; a poet, not a university professor in an ivory tower who tortures himself and others with canon-anxiety; a hybrid, not a racially “pure” person. I write for anyone who has an open mind, an open heart and not with an eye on passports, ghettoes, rigid categories.

Keith Garebian (son of an Armenian father and Anglo-Indian mother) was born in Bombay, India, and immigrated to Canada in 1961. Following his PhD in Canadian and Commonwealth Literature from Queen’s University, he began his freelance career as literary and theatre critic, producing over two dozen books, two chapbooks, and hundreds of articles, features, interviews, and reviews. A resident of Mississauga, he has won numerous nominations and awards, including the William Saroyan Medal (Armenia) and four Mississauga Arts Awards.

In the Bowl of My Eye

In his ninth collection of poetry, Keith Garebian pays attention to inner and outer realities of place and psyche, turning conventional landscape poetry inside-out. Focusing on the Lakeshore Road area of Mississauga/Etobicoke, Garebian explores small and large things, creating a space in which inner and outer landscapes meet, resulting in a striking poetic vessel of cognition, perception, and sensitivity. Meditatively alert, these poems open up perceptions of a sentient world within a specific geography, history, and sociology, while providing insights into suburbia and some of its characters, including the poet and his own personal life. The world of lake, park, and road is conjoined with a suburban world of apartment, shopping mall, immigrants, and fraught lives through language that has a deep-rooted sense of mood, tone, and melody.