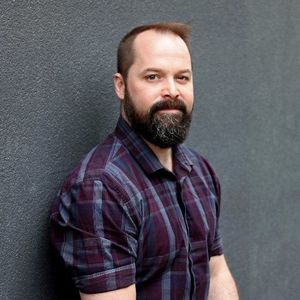 Kevin Hardcastle's Cormac McCarthy-esque brand of rural noir has been making waves in the Canadian literary scene since he first began publishing short stories in journals, earning a Journey Prize nomination in the process and leading to his Trillium Book Award-winning collection, Debris. He doubles down on his signature gritty, sparse, and powerful aesthetic in his debut novel, In the Cage (Biblioasis).

In The Cage follows Daniel, a promising MMA fighter whose life and career are derailed by a brutal injury. Out of options in his impoverished hometown, he finds himself moonlighting as an enforcer for a former friend, now a shady figure in the town's criminal underbelly. Daniel tries to protect his wife and daughter from the rising darkness in his life, but violence seems to breed and multiply, until survival itself is in question.

We're thrilled to talk to Kevin today as part of our version of the Proust Questionnaire, the famous personality-centric quiz that lets us get to know writers on a personal level. Kevin tells us about what he spent his prize money on, being internet-tall, and why you don't need to talk to him about Coke Zero.

Kevin also happens to be part of the small and mighty Open Book team as our Assistant Editor (no, he didn't write this intro).

To be able to write and not have to work a shitty job for some shitty boss again. To not have to see the front-side of 11:00am if I can help it.

I always get called "Toronto author Kevin Hardcastle," but I’m not from Toronto. I chose to live here after coming here for university, and I will always consider it home. That being said, I’d like to spend some time in other cities during my career, if I can figure out a way to fund such things.

Reliability, integrity, and an understanding of how tough they are or aren’t, and behaving accordingly as a result.

The level of ferocity and toughness that men don’t have.

The ability to not give too much of a shit about things that would get in the way of doing what I need to do.

I often think what is right is right, even if that line can move. I also tend to go on…

The amount of beer and chicken wings I’ve bought with my dwindling prize monies.

Anger, and flaws that manifest from damage or trauma.

Loyalty and the ability to put up with my ravings.

I talk too much instead of listening sometimes, and, while not a hobbit, I would like to be as tall as I sound on the internet.

My mum and dad. Poor people and women and marginalized people who get out of bed everyday and try to make a life of it.

Beer and Coke Zero (I’ve heard all this talk about Coke Zero being discontinued. This is false. Stop telling me this. It has switched to some Coke Zero Sugar thing that takes pretty much the same. But, if they do take away my Coke Zero, I will end up on the news).

The especially wealthy and what they’ve done to the rest of us.

To be able to sing like Chris Cornell, or to be able to have footwork like Dominic Cruz or Conor McGregor and the instincts of vintage Anderson Silva. For supernatural talent, Zack Morris Timeout, hands down.

I am currently in a state of anticipation and getting-readiness for this novel I’ve written that has just been released. I’m not feeling the nerves too much, but I am always a little restless in thinking of what to do with the latest work, and how to be better with the next thing I’m working on.

The two books I’ve done. And all of the work that it took to make them happen, and all of the stories I wrote over the years that did not suck.

Believe in your dreams.

Kevin Hardcastle is a fiction writer from Simcoe County, Ontario. His short stories have been published in journals and anthologies internationally, including The Malahat Review, The Fiddlehead, The Puritan, The New Quarterly, Joyland, Shenandoah, The Walrus, The Journey Prize Stories 24 & 26, Best Canadian Stories 15, and Internazionale. Hardcastle’s debut short story collection, Debris won the 2016 Trillium Book Award, the 2016 ReLit Award for Short Fiction, was runner-up for the 2016 Danuta Gleed Literary Award, and was a finalist for the Kobo Emerging Writer Prize.

Daniel is one of the most feared cage fighters in Mixed Martial Arts, closing in on greatness until an injury ruins his career. Forced back to his rural hometown, career derailed, he slips into the criminal underworld, moonlighting as muscle for a mid-level gangster he has known since childhood. Battling a cycle of rural poverty, Daniel and his wife Sarah struggle to secure a better life for their daughter, but in this violent and unpredictable world of back-country criminals and county cops, Daniel sparks a conflict that can only be settled in blood. Written in spare, muscular prose, In the Cage penetrates the heart of what it means to endure life in the underclass, revealing the small joys found there.