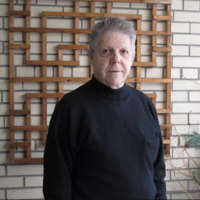 Northern Ontario is famous for its rugged beauty and unspoiled natural resources. But it's easy to forget just how big the region also is, and the challenges that scale can create. With just a tenth of the population of the rest of the province, North Ontario encompasses more land than Italy and Germany — combined. This spread-out population creates issues for some services, but particularly for access to medical care, both longterm and emergency. It was a problem for decades, with little hope on the horizon, especially for smaller rural, Indigenous, and Francophone communities.

Then in 2005, something astonishing happened. The people of Northern Ontario came together, partnering with Laurentian and Lakehead Universities, to create a medical school aimed at training and retaining doctors in Northern Ontario, for Northern Ontario.

It was an enormous undertaking, and its formation and effect on the region is explored in Larry Krotz's fascinating new book Nothing Ordinary: The Story of the Northern Ontario School of Medicine (Cormorant Books). The NOSM has transformed medical care in Northern Ontario, and we're excited to welcome Larry to Open Book today to discuss its legacy as part of our True Story nonfiction interview series.

He tells us about the intensive research process for Nothing Ordinary, which included nearly fifty interviews, reveals how a "nonfiction project is a lot like a physical building project", and shares his nonfiction heroes. 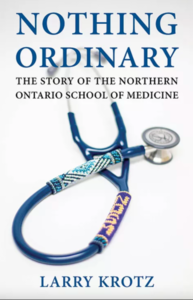 Nothing Ordinary is the story of how 800,000 people in northern Ontario invented their own medical school at a time, twenty years ago, when the region suffered perennial frustrations about having enough doctors to adequately serve it. I’ve long been interested in ‘the North’ or non-metropolitan Canada and this story seemed a prime opportunity to look at a very important topic. Also, I was intrigued by how many people in southern Ontario had never heard of the Northern Ontario School of Medicine, so felt I had an opportunity to educate an audience about something they might even think exotic.

The research process involved a great deal of travel as I interviewed about fifty subjects. Northern Ontario is sparsely populated with great distances between centres of settlement even when those are cities. So I stayed in a lot of different motels. I wanted to hear from graduates of the school who were out now serving as physicians in various communities as well as mayors and Indigenous leaders who had opinions about what the school has meant to life in their communities. The school was exceedingly cooperative and helpful in connecting me to sources and interviews.

If journalism is the first draft of history, nonfiction or documentary is the refined second draft – not quite academic history yet but an opportunity for a more settled perspective. I particularly like the interview aspect of it, the process of listening and prodding people to probe their own perspectives.

A lot of nonfiction prizes and anthologies have expanded to welcome more personal nonfiction as well as strictly research-based nonfiction. What do you think of this shift within the genre?

The 'all my struggles' or 'all my triumphs' books seem a bit narcissistic for my taste.

I’ve been doing this a long time. It’s mainly about getting up in the morning and going to work. A large nonfiction project is a lot like a physical building project. There are stages. You decide what you want – a cottage? a high rise? You check out the site. You make an architectural plan. Then you dig a foundation, order supplies, start laying bricks. There is no magic. Someone, I think Philip Roth said: amateurs look for inspirations, the rest of us just get up and go to work.

Nothing Ordinary, being the story of how a medical school came together and got through its first fifteen years, had a logical chronological flow. First there was the dream, then the politics, then the mechanics and then the evaluations. I tried to adhere to this natural structure punctuating it regularly with inputs from various evaluators – graduates, the experiences of various communities.

A great work needs to be readable and entertaining all the while leaving you with the feeling you are definitely learning something. My nonfiction heroes are Paul Theroux and Ryzard Kapuscinski. Both take their readers along on journeys into the wild unknown.

Larry Krotz is a writer and documentary filmmaker who has worked with the Globe and Mail, the National Post, the Literary Review of Canada, the National Film Board of Canada, and PBS. He is the author of ten works of non-fiction, a novel, and a picture book. His latest book is a history of the Northern Ontario School of Medicine called Nothing Ordinary. Krotz currently lives in Toronto, ON.

Nothing Ordinary: The Story of the Northern Ontario School of Medicine

A school of medicine made for the people by the people.

This is the story of how 800,000 citizens created their own school of medicine, and what it has meant for the region and its people.
Northern Ontario is a vast territory — almost as big as France and Germany combined — with a widely scattered population the size of only 10% of the rest of the province. Rich in forests, minerals, scenery and brilliant, hardy people, Ontario’s north, like many other rural and remote areas, had difficulties attracting and keeping doctors. The solution, they decided, was to train their own.

​An astonishing percentage of graduates remain to serve the unique needs of their home communities, from rural, to Indigenous, to Francophone. Over the course of twenty years, the Northern Ontario School of Medicine has transformed healthcare and created a legacy of a school that is far from ordinary.