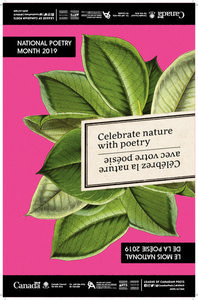 Poetry Month is winding down, but it's far from over! Today the League of Canadian Poets announced the shortlists for their prestigious poetry awards: the Gerald Lampert Memorial Award, the Pat Lowther Memorial Award, and the Raymond Souster Award.

Given in the memory of Gerald Lampert, an arts administrator who organized authors’ tours and took a particular interest in the work of new writers. The award recognizes a debut book of poetry published by a Canadian. The award carries a $2,000 prize and is sponsored by the LCP.

Given for a book of poetry by a Canadian woman, and is in memory of the late Pat Lowther, whose career was cut short by her untimely death in 1975. The award carries a $2,000prize and is sponsored by the LCP.

Winners, including that of the 2019 Sheri-D Wilson Golden Beret Award for Spoken Word, will be announced at the annual Awards Ceremony in St. John’s, Newfoundland, on June 8, 2019. Visit the League of Canadian Poets website for more.