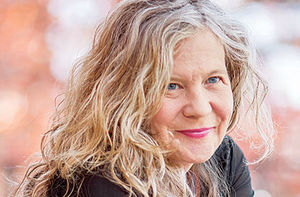 CanLit short story queen, Newfoundland-based author Lisa Moore needs little introduction. Her honours keep stacking up (most recently, Moore scooped her third Giller nomination on this year's longlist, meaning fully half of her books for adults have been nominated for the biggest fiction prize in the country), and her fans welcome her novels and story collections with equal fervour.

There is something particularly special about a Lisa Moore short fiction collection though, and this year's Something for Everyone (House of Anansi), her first collection since 2002's widely-acclaimed Open, is an occasion worthy of celebration.

We're positively thrilled to have Lisa on Open Book today to tell us about the books that have shaped her as a reader and as a writer, as part of our WAR: Writers as Readers series. She shares an Irish folktale that explains the beautiful books she has re-read, the book she would give her 17-year old self, and her go-to recommendation for a great read.

The W.A.R. Interview: Writers as Readers, with Lisa Moore

These are some of the earliest books that made me cry (and they are the usual suspects): Charlotte’s Web, A Tree Grows in Brooklyn, Where the Red Fern Grows, Little Women, and Anne of Green Gables. In all of these books, there are characters who imagine better worlds for themselves. They are all about the power of the imagination. They are all about characters deeply rooted in place. I just went back to read the first page of A Tree Grows in Brooklyn. It describes a tree that likes poor people. This species of tree moves into a neighbourhood when it starts to decays. As peaceful, stately Brownstones are cut up into small apartments for poor people. The tree grows in the cracks. Even in the first few paragraphs, many layers of history of a place – Brooklyn – are caught in a few paragraphs. The trees are like umbrellas. They shield.

I have re-read books I have taught in a first year English course many, many times. I’ve taught each of these books four times. A Complicated Kindness, by Miriam Toews; Ru, by Kim Thuy; Soucouyant, by David Chariandy.

There’s an Irish folktale about a man who captures a leprechaun in a forest and won’t set him free until the leprechaun tells him where his pot of gold is buried. The man has to go home and get a shovel and so he has the leprechaun tie a red ribbon around the tree under which the gold is buried, so the man can find it when he returns with the shovel. The leprechaun promises not to remove the ribbon. When the man gets back every tree in the forest has a red ribbon tied to its truck. That’s like those books – in preparation for class I would underline in red ink the sentences that were absolutely necessary for the plot, for character development, because they were beautiful, because they made me laugh, because they broke my heart, because they were perfect. And soon, in each of those books, every single sentence was underlined. Every line mattered.

The Master and Marguerita. This book has swished into my life a hundred times, sticking out of the knapsacks of people I’ve had crushes on; dog-eared and missing the cover in second-hand book stores; at other people’s cottages; recommended by students. I believe there’s magic realism and lately I’m drawn to that. When writing a book, why have things adhere to the normal rules of, say, gravity, when you could have inanimate objects floating in the air and animals speaking?

Go Tell it on the Mountain by James Baldwin.

Faulkner’s Wild Palms. This book doesn’t stick to any of the rules. It’s an interweaving of two very different stories that seem, on the surface, to have nothing to do with each other. It’s hilarious (the kind of book that makes you laugh on a plane so that  you wake the guy beside you) and devastating, about abortion and birth, about prison and floods. About freedom and the fear of it. The sentences move like water rising, with a very strong current. You drown in them, and are carried along so fast. It’s short, tense and it’s about climate change and incarceration, and women’s bodies and human rights.

Salvage the Bones by Jesmyn Ward.

Anything by Mavis Gallant. She is so funny and has such scope and vision.

I don’t know if this book has been overlooked, it may have won the Booker, but it’s a short book (whose spine might be easily overlooked on a bookshelf next to big fat tomes) The Bookshop by Penelope Fitzgerald. So hilarious and rigorous and deft and sad. Forgive the adjectives in a highway pile-up, but the voice in this novella hits so many different notes – about a woman who goes to a small town to open a bookshop in a dilapidated, leaky building inhabited by a ghost and who gets run out of town, this book. This book! Read it.

Elena Ferrante, of course. I guess everybody says that.

The commonly used literary trope that ruins a book for me:

The commonly used literary trope I can always forgive:

Not fond of tropes usually, but... the gumshoe detective, the shadows thrown by a streetlight through the venetian blinds, the covert meetings in greenhouses full of orchids with their stamens hanging out like thirsting tongues, stinking the place up with their perfume, and the femme fatale with her big brimmed hat and glossy blonde hair, the assistant with her cat-eye glasses and her sensible shoes who is always one step ahead of the detective and has the mystery solved while she files her nails, waiting for him to catch up, and of course the clink of ice cubes in the scotch. I can handle that!

Silver Award Winning Medalist in the Olympic  Catapulting Category, Lisa Moore. Okay I haven’t won it yet, but….

Lisa Moore is the acclaimed author of the novels Caught, February, and Alligator. Caught was a finalist for the Rogers Writers’ Trust Fiction Prize and the Scotiabank Giller Prize and is now a major CBC television series starring Allan Hawco. February won CBC’s Canada Reads competition, was longlisted for the Man Booker Prize, and was named a New Yorker Best Book of the Year and a Globe and Mail Top 100 Book. Alligator was a finalist for the Scotiabank Giller Prize, won the Commonwealth Writers’ Prize (Canada and the Caribbean region), and was a national bestseller. Her story collection Open was a finalist for the Scotiabank Giller Prize and a national bestseller. Her most recent work is a collection of short stories called Something for Everyone. Lisa lives in St. John’s, Newfoundland.

Internationally celebrated as one of literature’s most gifted stylists, Lisa Moore returns with her third story collection, a soaring chorus of voices, dreams, loves, and lives. Taking us from the Fjord of Eternity to the streets of St. John’s and the swamps of Orlando, these stories show us the timeless, the tragic, and the miraculous hidden in the underbelly of our everyday lives. A missing rock god may have jumped a cruise ship — in the Arctic. A grieving young woman may live next to a serial rapist. A man’s last day on earth replays in the minds of others in a furiously sensual, heartrending fugue. Something for Everyone is Moore at the peak of her prowess — she seems bent on nothing less than rewiring the circuitry of the short story itself.