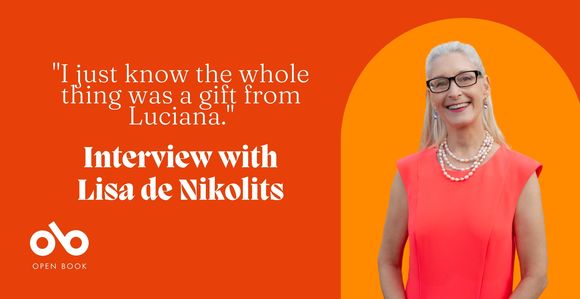 Lisa de Nikolits' wild romp of a novel, The Rage Room, was described upon its publication in 2020 as "Groundhog Day meets The Matrix" filtered through the author's trademark madcap creative, feminist lens. So when de Nikolits decide to pen a sequel, readers were understandably excited. Now, just two years later, Everything You Dream Is Real (Inanna Publications), takes us 11 years after the near future of The Rage Room.

In contrast to the dystopian AI-driven perfection of The Rage Room's chilling future society however, we get the aftermath of a world war that dismantled the plastic-obsessed, computer-centric life we first saw de Nikolits' characters living. Now they deal with unreliable electrical power, food scarcity, and a deadly plague of Monarch butterflies – until a potential saviour emerges, bringing them to the Fountain of Youth compound.

But like most easy fixes, the compound proves too good to be true in this darkly funny, politically charged follow up that shows de Nikolits, always a fearless writer, taking no prisoners. Whether you've read The Rage Room or not, Everything You Dream is Real is a searing, accessible fable for our collective fears and weaknesses, as fun as it is thought-provoking.

We're speaking with Lisa today about the book and how she created its memorable world. She tells us about meeting the real life inspiration for the cult leader character in Everything You Dream is Real when he showed up stark naked in a parking lot in Australia, why she always has a soft spot for her secondary characters, and the heartbreaking experience of losing her close friend Luciana Ricciutelli, the late Editor-in-Chief of Inanna Publications, during the publishing process. 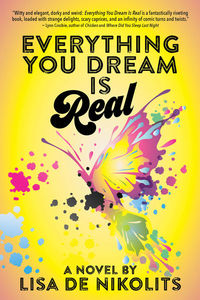 In 2017, my husband and I went to visit my family in Australia. My sister booked a beautiful beach house in an idyllic seaside town, and we all enjoyed the holiday of a lifetime. It was there that I began to write what would become – well, parts of it would become – Everything You Dream is Real.

It all started when I wandered off and met the perfect cult leader stripping down to his birthday suit in a deserted parking lot, having come in from a swim. The subsequent encounter had me phoning my husband and my sister to come and rescue me and the resulting character, Axel Patterson (Alpha Plus), is in Everything You Dream is Real.

The flight home was fun. Fuelled by ideas of backcountry Australian cults and loaded with copious lashings of superb New Zealand chardonnay, the latter unwisely and yet delightfully combined with generous doses of clonazepam (to combat my inflight claustrophobia), I finished writing the novel in a sixteen hours straight.

It was hardly surprising when my beloved publisher and Inanna’s Editor-in-Chief, Luciana Ricciutelli, summed up the novel thus: “What was that?”

Not my finest hour! I’d written an irredeemably bizarre and doomed book. Luciana Ricciutelli was quite right. Well never mind, I told myself. I put the manuscript aside and focussed on another novel, The Rage Room.

When I finished The Rage Room, I thought I was done with speculative fiction but I had to rescue my protagonist who’d ended up in a sticky situation. I was curious – could any of the elements from my ill-fated, Bacchus-fuelled, altitude-riddled, doomed novel work in a sequel?

The cult leader had potential. His primary money-making enterprise, Sextopia, could also work, as could The Fountain of Youth, the enemy headquarters. In fact, a few of the other characters fitted in marvellously although of course everything had to be rigorously rewritten (without any chardonnay or pill bottles on hand!

The ending didn’t change but the road to get there most certainly did! That’s the thing with me — I always know the title of the book, I always know the beginning and I always know the end. And I always ‘think’ I know the middle, but it never turns out the way I expect it to. And that’s why I find writing a book so exhausting. I start off calmly, in full control of the characters and the narrative, and then the characters step up and rewrite the script. And they don’t mess around. It’s like having a very rowdy circus in my head.

I always love my secondary characters the most. It’s almost a trend that secondary characters in my short stories become protagonists in later novels. Mother/Mariangela was a minor character in The Rage Room but she’s a big shiny star in in Everything You Dream is Real, because I just knew she had so much more to give.

I was particularly fond of the convicts who get trapped inside Sharps’ head (he’s the protagonist of The Rage Room.) I loved the convicts so much that I extravagantly overwrote them. There were so many of them that they were a book unto themselves. My substantive editor, Jen Hale, and I had to rigorously cull the content.

There are so many wonderful characters in this book. Take Anise, for example. She’s so sassy, with such great style (I picture her as Linda Evangelista in the 1990’s) but the character development she shows is heart wrenching at times. She’s a beautiful badass who’s been through a lot.

Planet Earth, irremediably afflicted by a war born from mankind’s avarice and negligence, is now home to the remnants of a civilization forced to navigate a decadent world.

The most memorable moment was, oddly enough, designing the cover. As you know, our beloved Luciana Ricciutelli (Editor-in-Chief of Inanna), left us just over a year ago and it was like losing a sister.

I was sitting at my work-from-home desk after a long tough day at work, when an idea for the front cover popped into my head. Ah, I’ll do it later, I thought. There’s so still much time left. And I heard Luciana’s voice saying “Try it now Dearheart, why not?” So I did and the cover came together in an hour. I found the perfect artwork and I just know the whole thing was a gift from Luciana. She had such faith in my writing and every time I look at the cover, I feel her connection to the book. She’s still very much a part of my writing.

I’m not good at celebrating! I set a deadline, nearly die of exertion getting myself there, then I have a nap, get up, and set the next deadline.

There is one moment I really do celebrate and that’s when I get my box of author copies and I hold the book for the first time. I carry it with me everywhere for a while. I sleep with a copy next to my bed and keep it within eyesight for about three months.

I wanted to celebrate the publication of The Witchdoctor’s Bones with a tattoo under my foot: “Thank You” in a lovely scripty font (because the journey to fashion that manuscript into a publication-worthy book was the most intense of all my novels). I told God and the universe and all the angels and saints that if that book ever became a real part of the world, that I’d get the tattoo and that I’d NEVER want for anything ever again! But apparently, you can’t get the undersoles of your feet tattoed, and needless to say, I didn’t keep my promise to God and the universe, because a few months later, all I wanted was another book! And, by another book, I didn’t mean a published book, I just wanted to see if I could get the next idea in my head on paper in a real way.

I forgot, I also buy myself one random frivolous treat per book. This one’s going to be a candle by Shy Wolf Candles. “Gold Dust Woman” is my favourite and while I try not to buy high-end candles because they’re such an indulgence, this is a good excuse (reason!).

To Luciana Ricciutelli. Not only do I owe her (and Inanna) everything, she was beloved to me. And I also dedicated to the book as I always do, to my husband, Bradford Dunlop. As all writers know, our spouses are faithful allies and it’s not easy being in a relationship with an author! We’re obsessed, really.

Lisa de Nikolits has been hailed as “the Queen of Canadian speculative fiction” (All Lit Up) and is the international award-winning author of ten novels. Her short fiction and poetry have been published in various international anthologies and journals. Lisa has appeared on recommended reading lists for both Open Book Toronto and the 49th Shelf, as well as being chosen as a Chatelaine Editor’s Pick and a Canadian Living Magazine Must Read. Her book, The Rage Room, was a finalist in the International Book Awards and her novel The Occult Persuasion and The Anarchist’s Solution, was longlisted for a Sunburst Award for Excellence in Canadian Literature of The Fantastic.

Other works include The Hungry Mirror, West of Wawa, A Glittering Chaos, Witchdoctor’s Bones, Between The Cracks She Fell, The Nearly Girl, No Fury Like That (published in Italian as Una furia dell’altro mondo, in 2019), and Rotten Peaches. She has lived in Canada since 2000. She has a Bachelor of Arts in English Literature and Philosophy and has lived in the U.S.A., Australia, and Britain. www.lisawriter.com

Everything You Dream is Real

Eleven years after a world war destroyed the consumer-driven, plastic-based existence of 2055, a new order of players jostles for power. Streaky electricity, ravaging drought, a scarcity of food, and deadly Monarch butterflies make for an increasingly desperate situation.

Worlds collide when both Mother and Sharps’s children are kidnapped by the unstable plastic surgeon Alpha Plus and taken to The Fountain of Youth compound. There’s flowing water and beautiful people and beautiful clothes and an incongruous convent where children wear smart uniforms and are tutored by nuns. Lovely, until they discover that a subterranean sex trade funds the compound and the man who leads it is mad. Can Mother, Sharps, and the others take down Alpha Plus and his army? Or will they too become pawns in his bid for world domination?

Hilarious and at the same time poignant, Everything You Dream Is Real is a fabulous, adventure-filled sequel to highly acclaimed The Rage Room that will delight fans both new and old.