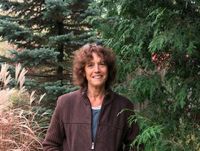 The '70s and '80s were a time of radical change and evolution, and the queer community was particularly instrumental in resisting and interrogating the environmental and social crises of that time, the effects of which we are still facing today. Lise Weil experienced that important chapter in lesbian history firsthand, and has captured it in In Search of Pure Lust (Inanna Publications).

The memoir takes readers into that influential era, moving from the northeastern United States to Quebec, as Weil deftly weaves her personal experiences together with the history of the lesbian community. There is triumph and fearless fighting for equality, as well as internal strife and conflict, both personal and political. In Search of Pure Lust is a clear-eyed, engrossing account of politics, love, and passion. Through various relationships and an influential Zen retreat, Weil discovers more and more about the nature of both desire and self-reflection.

Today we're talking to Lise as part of our Lucky Seven interview series, where we ask writers about their newest books, their process, and more. She tells us what she discovered about the nature of desire while writing this book, what it is like to publish a project that she spent time with for (more than) fifteen years, and she shares the adorable story of how she and her partner met.

In Search of Pure Lust began to take shape some fifteen years ago as a meditation on lesbian desire. Astrologically speaking I’m mostly fire and air which means I blaze pretty hot in love and I catch fire easily. As it happened, when I came out in 1976 the world around me was on fire in much the same way. Lesbian desire was at the centre of an entire culture – and a movement. Desire was our guiding light. But after a series of spectacularly failed relationships I had to acknowledge that desire as a guide was not terribly reliable. Moreover, it only occasionally coincided with love. Around this time I began sitting zazen in a Buddhist centre where evenings I would find myself chanting “I vow to extinguish all desires.” There was an obvious tension here and I was interested in exploring it.

At the same time, the more I wrote about lesbian desire and the culture that took shape around it, the more obsessed I became with the question “what happened?” Because by the time I began writing about it, this rich, complex, far-reaching culture of bookstores, restaurants, performance spaces, music venues, conferences and festivals, not to mention a massive print network, had for the most part disappeared. As a feminist editor—I had founded and edited the U.S. feminist print journal Trivia: A Journal of Ideas which later morphed into the online journal Trivia: Voices of Feminism-- I had been an active participant in this culture. How did a world so full of promise and possibility just vanish? And why? Of course I was aware of the social and economic forces that shuttered our bookstores and bars and put our journals out of operation. I was aware of backlash and cooptation. But the longer I asked the question and the more I wrote about lesbian desire and my own failures the clearer it became to me that there were internal reasons as well. Over time this became the heart of my inquiry. Not just why did all those relationships fail, but how and why did we—as a movement—fall apart?

(As you can see, a whole series of questions emerged from the writing process.)

The longer I wrote the more desperately important it felt to memorialize the world we had lost and my participation in it in as much detail as possible. In the process, what began as a series of meditations on desire morphed into a memoir. I said above that it took me fifteen years from start to finish but recently I discovered a notebook dated February 2001 with 26 pages of scribblings about lesbian desire. I was astonished as I read through them to find all the core insights of the book; the entire memoir was there in seed form. So I guess it actually took more like seventeen years.

I have no particular rituals associated with writing. What I do need, apparently, is a very long period of time.

I take long breaks from the writing when I’ve hit a wall. And I am exceedingly lucky in that my partner is a professional Tarot reader and astrologer. I went to see her not long after I arrived in Montreal (I moved here from the U.S. in 1990). I had lost my cat and was inconsolable. She was not able to help me find him but she advised me to go to the SPCA and find another one (all this is in the book). I did as she advised and that cat, Gracie, soon became a big love. Two years later, so did the astrologer. Anyway, in moments of doubt and discouragement—and they have been frequent and profound over these many years—I would ask her for a reading and we would consult the cards. Their message was always more or less: just keep going.

A great book is visionary; it’s one that has completely absorbed the defining issues of its time and is able, by means of imagination and craft, to move the reader to engage with them in an embodied way. Virginia Woolf’s To the Lighthouse is such a book. It’s the most brilliant study in family dynamics I know. Woolf understood that women in her time (it was published in 1927) were the great unacknowledged natural resource; the mother at the centre of it, Mrs. Ramsay, who is surrounded by needy, posturing men, dies from having given too much. In the novel, men going to war and women deferring to men and thus losing themselves are seen as lynchpins of a toxic patriarchal economy. And then there’s the spinster/lesbian artist Lily Briscoe who brings new vision. To the Lighthouse is a presence throughout my memoir.

More recently, Lidia Yuknavitch’s visionary novel The Book of Joan (2016) depicts a post-embodiment world in which the survivors of a geocatastrophe inhabit a satellite called CIEL that siphons what remains of earth’s resources through skylines. Joan, otherwise known as Joan of Dirt—the novel is a retelling of the story of Joan of Arc—is one of the few survivors still inhabiting earth. She hides in caves with ribbon eels and rabbit bats, spiders, worms and salamanders. Her communion with the earth is the source of her mysterious powers, which offer the only hope for human deliverance. Yuknavitch has absorbed and made magnificent fiction out of the fact of our disconnection, as humans, from both our own bodies and the natural world-- a disconnection that is putting all life on earth in danger.

I am working on a second memoir that looks at the legacy of disconnection in my own family and the ways I’ve wrestled with it. For four years I’ve been editing a journal, Dark Matter: Women Witnessing, devoted to healing our broken relationship to the earth.

Lise Weil is an award-winning editor and translator. Her essays and literary nonfiction have been published widely in Canada and the U.S. She is founding editor of Dark Matter: Women Witnessing and teaches in the Goddard Graduate Institute. Her short fiction, essays, reviews, literary nonfiction, and translations have been published widely in journals in both Canada and the U.S. Her collection of Mary Meigs’ writings on aging, Beyond Recall (2005), was a finalist for a Lambda Literary Award in biography in 2006. Born in Chicago, she moved to Montreal in 1990. These many years later, she is still in love with this city—for its mix of cultures and languages, its café life, its year-round festivals, and its proximity to wilderness. She spends summers in a cabin in the woods north of the city where she hosts annual retreats for women writers centred around dreamwork.

In Search of Pure Lust

In Search of Pure Lust documents an important chapter in lesbian history that is already being distorted and erased, a time when lesbians were reinventing everything from the ground up. Along with violence against women around the globe, lesbians of the 1970s and ’80s were motivated by growing militarism, rampant development, species loss, and living systems in decline. For many, this was the logical conclusion to a state of law/mind/rule that had prevailed for thousands of years — patriarchy.

This is a long overdue and unvarnished insider’s account of those times. The memoir, centered in the Northeast U.S. and then later in Quebec, combines a personal story with the story of a political movement. The book is full of celebration, but also depicts the shadow side of the lesbian movement, taking the reader into the bitter squabbles that divided women, both personally and politically. On a deeper level, the memoir charts a long and difficult quest for love. Over and over, the narrator dives headlong into rapturous passions that either fizzle out or come to brutal and ugly endings.

In the mid-’80s, when a friend invites her to a Zen retreat, she as desperate enough to say yes. A period of difficult self-examination ensues and, over a period of years, she begins to learn an altogether different approach to desire. The last section of the memoir traces the fallout from that collision between hot-blooded lesbian desire and spacious, temperate Zen mind. What the search for pure lust uncovers, in the end, is something that looks a lot like love.