In Victoria Hetherington's Autonomy (Dundurn, a Rare Machines Book), we meet Julian, who was born in a lab. His closest friend is Slaton, a therapist who's been accused of a crime in the post-privacy, post-personal-freedom world in which they live in the late 2030s.

Julian may be the only one who can help not just Slaton but many others, as social collapse and a mysterious, global plague threaten what little they have left. Because Julian isn't a person—he's a sentient AI, and the only entity who can both understand what is coming and process its implications using what he's learned of human nature from Slaton.

As Slaton and Julian infiltrate a social circle of the superrich, intent on doing what they can to avert the coming disaster, Hetherington takes readers deep into an all-too-believable dystopian near future in which tech reigns and personal privacy and choice are illusions at best. A thoughtful, tense, compulsively readable examination of bodies, freedom, and the dark endgame of current political, technological, and environmental crises, Autonomy posits a world where we no longer question our phones listening to our conversations or the clawback of women's reproductive rights.

We're thrilled to present an excerpt of this timely novel, from an exciting writer, courtesy of Rare Machines/Dundurn Press.

Here we meet Slaton in her role as a therapist for privileged students, when she first cross paths with the one student who will alter the course of her life, driving her to a crisis that results in her meeting with Julian.

Excerpt from Autonomy by Victoria Hetherington: 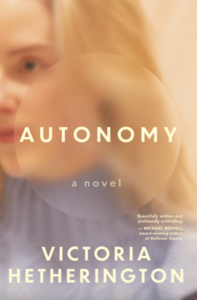 On weekday mornings I rushed past students ambling to class, veering toward soft thickets of pigeons until they stirred and, with great effort, launched in different directions. Though I had been told, fairly consistently, that I had a slight frame and sharp prettiness that gave an impression of youth, I had found and yanked three more grey hairs that morning, and fallen into melancholy — Oh, I thought, that’s it, I’m fading out and disappearing. Some students walked right into me if I didn’t lurch out of the way or, depending on my mood, jam my elbow in their ribs. I worked as a student counsellor in Mediation Studies in the Department of Brand Management at D’Aillaire University, a job that paid a little better than the guy who supervises the other guy bagging groceries. Though some student patients were lovely, asking me heartbreaking, childlike questions during therapy, others were sullen, deigning to speak only when necessary, although each session was painfully expensive. Their instructors — perhaps feeling guilty about the uselessness of the degree for which these kids’ parents paid thousands of American dollars — treated students as collaborators, breeding handfuls of little monsters in the bricked-­up heart of this campus. Canadian dollars still worked, sometimes, out in the sticks, but certainly not here, not even in the tiny convenience stores stocked with ancient soaps and soup tins and that still, occasionally, sold cigarettes.

The Department of Brand Management was a featureless black building on the edge of campus, its walls a perfect canvas for the beautiful advertisements that danced across them at night, a stone’s throw from a cluster of bars slinging soapsudsy beer in the dark. These bars were slotted right beside darker-­still restaurants that served tiny meals on cutting boards to women with expensive faces and the much older men whose attention they struggled to keep. I had turned thirty-­four a couple of weeks ago. As the world grew more and more frightening, I was, at least to these women, still young enough to hate.

Arriving in my office, I pulled up my calendar for the day. First on the docket, a new student: Camille. Interesting. Then, at 10:15 a.m., the Department of Brand Management’s Monday Wellness Check. We were to stand in a circle in the communal kitchen, which forever smelled like everything anyone had ever microwaved, and discuss our “battles.” The Associate Dean would sit at the white table at the centre, her head tilted a little to the side, and listen wordlessly:

Then, at 11:00 a.m., an appointment with Anatolia, a student I knew to be careful around: the department was keeping a close eye on her. Every four years, the entire ecosystem of the school renewed itself with new students, and with this precise, quadrennial infusion, effectively wiped its memory, but she was different: with Anatolia, I had to intercept and quell notions of student unionization. Every time she left my office, I both worried for her and felt deep annoyance, an itch beneath a scratch. With her sorrowful expression and her strings of absorbing, near-­lyrical complaints, she reminded me of my mother, which made me feel a little better about her near-­inevitable expulsion.

My mother had lived with chronic pain, an ugly cluster of invisible illnesses that — along with her alcoholism — drove my father away. When I was about five, she had sloughed off her pain for a few hours, emerging from it unsteadily as if from a red bath. She seized this rare day of clarity, and we sat on the balcony of our apartment together. It was summer; the trees just below our feet radiated heat and fragrance, their branches massively swollen with leaves and seed pods. She dug in her pocket and placed six old Canadian pennies along the banister of the balcony — to bring you wealth, she explained. I wanted to put one in my mouth.

She disappeared into the dark of the apartment and reappeared with two orange Popsicles. “Eat it fast,” she instructed, and my hands grew sticky as I licked and bit the Popsicle in the heat, and I looked up at her and love rang through me like a bell, one long, powerful, simple note. And I blinked hard, trying to save that very moment for the future, in case there was a time in which I needed it more, so I might escape into it.

Twenty-­nine years later, I’ve worn that moment threadbare, but it was still a liminal space: I escaped into it as much as I could.

Throwing down her bag and tossing her braids, the student named Camille collapsed onto my grey therapy couch as if unloading a boulder of strain. Camille: a slinky, knowing name I couldn’t imagine anyone giving to a baby, a scarlet-­red name that strips all presumed innocence from the birch-­like body of a young girl — my god, what a world this was.

“I forgot to ask if you wanted, like, a tea or something, Slaton,” she said, saying my first name with the natural ease of an equal, an overfamiliar tone that alarmed me and suggested she called her mother by her first name, too — though perhaps this was normal now; she was so incredibly young, and I was so palpably not, particles of my vigour and selfhood oozing through my etched-­up face every moment — and I stared at her with my mouth a little slack before saying:

“How kind of you, Camille! Thanks for stopping by today.”

We both pretended that four classes a week and hanging out at the library was a busy schedule from which slivers of time must be carved. She granted me a little smile. She was wearing lipliner, and the beauty mark near her nose looked painted on. If I had the time and my twenty-­year-­old self back, with that bright, pulsing youth sealed so tight that I was buoyant, weightless, blameless — would I learn to paint myself like that?

Of course. Of course I would.

“I mean, thank you,” she said, examining the end of one braid.

“It’s what I’m here for!” I smiled and reached for my notebook. “What can I help you with today, Camille?”

I nodded, enviously imagining a line of suitors extending long and keen from her dorm-­room door, and reflected on my own paltry love life. I was fucked at fourteen and kept on fucking, but didn’t have an orgasm until I was nearly nineteen. I couldn’t come with a man until my midtwenties, and even then it’d be a freak occurrence that’d bubble up and overwhelm me, presenting a pleasant and not entirely unwelcome surprise to whomever I was soaking and clenching at the time — usually Crawford.

“With a particular boy? Would you consider him your boyfriend?”

I held up a warning finger; at the mention of Muslim and perhaps even American, both of our phones had likely pricked the tiny sensors I anthropomorphized as ears, and were listening through my bulky purse and through her anxiously clenched fingers.

“I have to stop you here, Camille: Do you understand the limits of therapy confidentiality?”

“Yes,” she said, and perhaps she did — for, born into postprivacy and long after the American Protectorate had eroded definitions of bodies, families, and freedom, Camille’s special web of self was porous and monitored. The world listened with countless invisible ears as she ate, laughed, cried, urinated, and spoke in coded whispers with her friends to the delight of the countless and invisible, within which she too was enmeshed.

Victoria Hetherington worked as a butcher and an artist’s model before graduating to writing just about anything you can imagine for money. Their debut novel, Mooncalves, was a finalist for the Amazon First Novel Award 2020. Victoria lives in Toronto.

In a near future ravaged by illness, one woman and her AI companion enter a dangerous bubble of the superrich.
It's 2035: a fledging synthetic consciousness “wakes up” in a lab. Jenny, the lead developer, determined to nurture this synthetic being like a child, trains it to work with people at the border of the American Protectorate of Canada. She names it Julian.
Two years later, Slaton, a therapist at a university, is framed by a student for arranging an illegal abortion. She follows the student to America and is detained at the border, where she meets Julian in virtual space. After a week of interviewing, he decides to stay with her, learning about the world, the human condition, and what it means to fall in love. Meanwhile, a mysterious plague is spreading across the world. Only the far-seeing and well-connected Julian can protect Slaton from the impending societal collapse.
Autonomy is an ambitious philosophical novel about the possibilities for love in a world in which human bodies are either threatened or irrelevant.