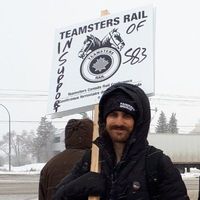 In cities across North America, public transportation is an essential part of day-to-day life. For many citizens commuting to work, heading to doctor's appointments, or simply running errands, government-funded buses and trains are often the only way to reach their destinations on time, or at all.

So why, then, are so many of these systems broken? With his newest book, Do Androids Dream of Electric Cars? (Between the Lines), author and journalist James Wilt seeks to get to the bottom of that question. Delving into the history of North American automobility through its "three revolutions" and documenting the struggle of present-day workers and riders fighting for better conditions, Wilt examines what has gone wrong with public transportation - and what a brighter future might look like.

Based on extensive interviews with community activists, academics, transit planners, authors, and journalists, Do Androids Dream of Electric Cars? marvelously weaves together issues of climate change, economic and racial disparity, labour struggle, urban density and more to remind us that we can all affect change in how our communities are served.

We're very excited to have James at Open Book today, where he discusses how an article he wrote planted the seed for his new book, his daunting-yet-fulfilling research process, and how others' campaigns for transit reform inspired him to keep working.

My book is the outgrowth of an article that I wrote for Canadian Dimension’s website in late 2017 about the importance of organizing for better public transit. The local concern in Winnipeg at the time was the Manitoba PCs’ cancellation of a unique and long-standing agreement between the city and province to cover the transit system’s operating costs.

Witnessing the fallout of that funding cancellation alerted me to the complex but highly important aspects of transit politics in my city and elsewhere. I wrote the Canadian Dimension article as a way of organizing some thoughts I was developing on the subject in response to such austerity measures. Shortly after the publication of the article, the managing editor of Between the Lines Books – Amanda Crocker – reached out to ask if I would be interested in expanding the premise of the article into a book. I was more than happy to oblige.

My original proposal to Between the Lines was fairly national in scope, envisioning chapters that investigated specific issues with Canada’s VIA Rail and Saskatchewan’s intercity bus service, for instance. The initial questions were almost exclusively focused on Canada: what are the problems with how existing systems are failing us? And how can we improve?

During my research and writing, and with helpful edits from Amanda, I began to reshape the book into one more responsive to current changes in the transportation landscape, expanding its scope to cover North America rather than just Canada. That meant focusing on the so-called “three revolutions” in automobility (electric, ride-hailing, and autonomous) and using them as a framing device to counterpose the weaknesses and possibilities of public transit.

Specifically, I posed the questions: what are the three revolutions in automobility promising? How do they fail to live up to the hype? What flaws in existing public transit enable this hype to take hold? And how can public transit be improved? Those questions were applied to a set of interrelated issues including climate and environment, racial and economic justice, accessibility for seniors and people with disabilities, data privacy and surveillance, labour and unions, and intercity/rural transportation.

I spent several months reading and taking careful notes about every media and academic article I could locate on the subjects of transit and next generation automobility (no small task!). It was very much a process of diving down an endless series of rabbit holes, with one set of findings inspiring another set of questions. It was unsurprisingly time-consuming, and I was lucky to be in a financial position to devote sufficient resources to it.

From that point I began to reach out to transit experts across North America for interviews: activists, planners, consultants, academics, and journalists. This process greatly shaped the actual content of the book (these experts know a whole lot more than me about the subject) as well as how I went about framing the problems and opportunities of transit. Perhaps the most unexpected part was finding out how many amazing people were willing to chat with a random journalist about their writing, research, and activism. It was a real privilege.

As I’m sure many writers (or creative workers in general) can relate to - a fairly fixed schedule. I can get kind of obsessive about work and figuring out a specific problem, which can become an issue with a project that takes multiple years to complete. This is more of a retrospective admission of failure than anything: I’ve recently started to regiment myself into a 9-5 schedule, which has helped a great deal. So, in that sense I learned what not to do during this project.

It was important for me to identify the source of my discouragement. If it was to do with a perceived lack of information about a subject, I would try rectifying that by doing a couple of days of focused research or calling up some experts to get their perspectives. If it was concerning the utility of the book - is this really going to interest people? Am I saying things that have already been said? - I would try to look for examples of transit riders and workers organizing for improved conditions as inspiration to keep going. In a sense, I wrote the book as a tool for those exact people to use in their struggles as a resource, so having them in mind was helpful.

If those strategies failed, I would take a break: usually exercising or playing a video game. Anything to get my mind off the project for a few moments.

There are the classic characteristics of a great non-fiction book: timely, focused, empirical, and written in an engaging style. Another feature that I prioritize heavily is its rootedness in real-life struggles for a better world. That can look like a lot of different things depending on the subject and context of the book (and is obviously made easier if the book itself is about social movements or resistance efforts). But it can also result from careful historical writings. A perfect example of that in my mind is Stolen City: Racial Capitalism and the Making of Winnipeg by Owen Toews (ARP Books: 2018). It brilliantly weaves together 150 years of history about the production of what we know to be Winnipeg by capitalist and colonial powers, contrasting existing geographies with alternatives fought for by Indigenous peoples. It’s an extremely detailed but accessible resource for local activists to better understand the context they are working in, but also for anyone who is interested in processes of colonialism, gentrification, and resistance.

I’m currently in the process of writing my thesis for an MA in geography that I’m taking at the University of Manitoba, about the histories of two proposed natural gas transportation projects in the Canadian Arctic Archipelago in the 1970s and 1980s. I’m also continuing to write freelance articles for publications including Canadian Dimension, Briarpatch and Passage. Maybe another one will end up as the seed of a book idea.

James Wilt is a freelance journalist and graduate student based in Winnipeg. He frequently contributes to Canadian publications including Canadian Dimension, Briarpatch, and Passage.

Do Androids Dream of Electric Cars?

James Wilt, Between The Lines

Public transportation is in crisis. Through an assessment of the history of automobility in North America, the “three revolutions” in automotive transportation, as well as the current work of committed people advocating for a different way forward, James Wilt imagines what public transit should look like in order to be green and equitable. Wilt considers environment and climate change, economic and racial inequality, urban density, accessibility and safety, work and labour unions, privacy and control of personal data, as well as the importance of public and democratic decision-making.

Based on interviews with more than forty experts, including community activists, academics, transit planners, authors, and journalists, Do Androids Dream of Electric Cars? explores our ability to exert power over how cities are built and for whom.