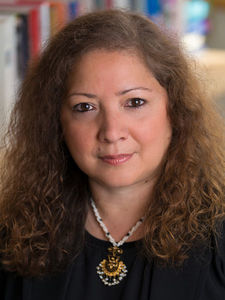 An earthquake survivor, a resort hotel maid, a migrant worker on a chicken farm. These are just a few of the fascinating and diverse characters in Mariam Pirbhai's short story collection Outside People and Other Stories (Inanna Publications). And while their careers, longings, escapes, and adventures are each unique, all of these characters are brought together by their compassion and strength in the face of challenge and loss in the struggle for connection and identity.

Unflinching and clear-eyed, Pirbhai makes protagonists out of those who have often be relegated to background roles, to stunning effect. It's an exciting debut from the Waterloo-based academic and we're excited to welcome Mariam to Open Book today as part of our Lucky Seven series.

She tells us about the ways in which she crafted her stories to reflect the character of Canada itself, the importance of a few bites of something sweet while writing, and her favourite free and easy cure for a writing roadblock (hint: you'll need your sneakers).

Outside People and Other Stories is my first short story collection, released in October 2017 by the Toronto-based Inanna Publications. There are nine stories in the collection, each of which focuses on the perspective of those I would characterize as some of the most “invisible” segments of our so-called “visible minority” population. Those whose stories rarely get told: people (largely though not exclusively women) of different ethnic and socioeconomic backgrounds navigating the Canadian or trans-American workforce as temporary migrant workers, bankers, chambermaids, civil servants, and the like. The stories consider their experiences at the nexus of personal challenges such as senior care, infertility, cancer diagnosis, unemployment (to name a few examples), and the larger forces that shape our contemporary world (Islamophobia, natural disasters such as the Haiti earthquake of 2010, migrant labour, citizenship debates, etc.). The collection also includes a unique feature in Canadian literature: a glossary of the languages spoken by this multiethnic cast of characters, including Spanish, French, Urdu/Hindi, and even Caribbean creoles.

In my other life as an academic specializing in postcolonial and diasporic literatures, I am always on the look-out for works that provide new and provocative representations of the immigrant or diasporic experience. The realities and experiences of migration are so diverse that it is understandably difficult to cast a wide enough net to capture all these incredible stories. But so far much of the literature being produced by “people of colour” or “minority” writers such as myself, tends to focus on the “journey” and the “homelands left behind,” rather than on life in Canada itself. So I thought: why don’t I tell the stories about the kind of experiences that just don’t seem to be out there—or at least out there in the kind of diversity and variety I would like to see.

At its core, this is a book about what it might be like to live in this world as a twenty-first century migrant. However, I resisted the idea of telling stories about one or other diasporic community, or one or other ethnicity, etc., so this book focuses on many different perspectives to reflect the multi-ethnic character of Canada itself: Latin American, South East Asian, Caribbean, Pakistan- and Indian, etc.

In this regard, the title “outside people” suggests not only outsidership but also a kind of vulnerability and precarity among those who live outside the protection of family or state, as a consequence, or indeed as a common aspect, of twenty-first century migration.

I tend to write intensively for months at a stretch and then edit and revise up to the very last possible second. I would say the process took about two years in all, from manuscript to publication, including all those quiet stretches of reflection and nail-biting anticipation in between.

A couple of the stories, including the title story “Outside People,” were previously published in anthologies or literary journals. These stories were revised quite a bit. This is not only because I’m a compulsive proofer (I tend to wear the hats of writer, critic and editor all at once in that “other life” I was referring to earlier). It is also because I see storytelling as something organic—something that responds, much like us, to life and the world as it unfolds.

Not much at all: my desktop computer (I’m old-fashioned that way); quiet stretches (I envy people who can work in cafés!); plenty of tea and hopefully a few bites of “something sweet”; and the view from my window, which generally consists of squirrel-watching, bird-watching and the occasional passer-by—just enough activity, that is, to remind me that there is a pulsating world out there, beyond the words.

This is an easy one: I walk, walk, walk. It is amazing the clarity of mind that a good brisk walk can produce. Which reminds me: I need to buy a new pair of sneakers!

I tend to love books that bring our global histories—those grand narratives of our times--to life in really unexpected ways, like the British writer Andrea Levy, whose novel The Long Song takes us into the mind and heart of a woman born into slavery, using humour and laughter in at once entirely unsettling and exceedingly natural ways.

I think works that are able to see the comedy in tragedy and tragedy in the comic, as novelist Rohinton Mistry might say: these, for me, are books that capture something so fundamental about human experience.

I am currently working on my first novel. It involves several families of various backgrounds in Toronto and Montreal, all of them connected in some way to the recent spate of attacks against local mosques or Muslim communities. It’s my Canadian novel and I couldn’t be more excited about that! But it is also my attempt to make sense of the militant and violent forms of racial and social conflict besieging all of us today. That’s all I can say for now. I hope you can stay tuned!

Mariam Pirbhai was born in Pakistan, and lived in England and the Philippines before emigrating to Canada. She lives in Waterloo, Ontario, where she is an Associate Professor in the Department of English and Film Studies, at Wilfrid Laurier University. Pirbhai has published several academic books in the field of postcolonial and diaspora studies. Her short stories have also appeared in numerous anthologies and literary journals. Outside People and Other Stories is her debut collection of short fiction.

Outside People and Other Stories

A Haitian woman survives the ravages of an earthquake only to find her sister, an émigré in Montreal, the subject of a grisly crime. A chambermaid in a Mexican tourist resort frequented by Canadian tourists wonders why all the men in her life seem to leave her for distant lands. A Jamaican migrant worker at an Ontario chicken farm comes to the aid of his Peruvian co-worker on the eve of a fatal car accident. And a young Pakistani-Canadian woman finds herself in the midst of a protest march defending Muslim women's rights on the same day she has agreed to meet her Moroccan lover. The diverse cast of characters that energize Mariam Pirbhai's Outside People and Other Stories not only reflects a multicultural Canada but also the ease with which this striking debut collection inhabits the voices and perspectives of nation, hemisphere, and world.