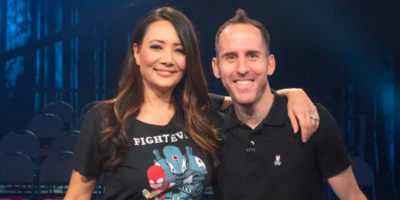 It was an emotional day at CBC as the final Canada Reads debates got underway to see what book would be the 2019 victor: Homes by Abu Bakr al Rabeeah and Winnie Yeung (Freehand Books), defended by Simple Plan drummer Chuck Comeau, or By Chance Alone by Max Eisen (HarperCollins Canada), defended by science journalist Ziya Tong. Comeau's eloquent and emotional defence of Homes seemed to be swaying the group until a point Tong made late in the game turned out to have personal resonance for one panelist. 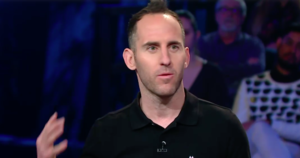 The debates started off on a positive note, with the panelists whose books had been knocked out invited to reflect. Yanic Truesdale, who had defended Suzanne by Anaïs Barbeau-Lavalette (translated by Rhonda Mullins, Coach House Books) praised the competition for letting him "reconnect with reading for the joy of reading".

Then it was gloves off as Tong and Comeau gave impassioned pleas for their titles. Comeau noted the growing tide of hate crimes committed against Muslim people, something that distresses him as a Quebec native, where hate crimes against the Muslim population have seen a particularly marked increase. He urged Canadians to read Homes, which tells the story of a young man fleeing the Syrian war with his family, and use it as a way to see the beauty and resilience of the Muslim community.

There was a short break for recorded messages of support for the remaining panelists, a Canada Reads tradition. Tong and Comeau each had two calls: Tong's were from Max Eisen's granddaughter, Amy Eisen, and entertainment reporter Lainey Lui. Comeau received messages from his author Abu Bakr al Rabeeah's father, and a message from his wife Jaclyn and young son London that received resounding applause (and a few tears from Comeau) when London sent his love to his father.

In the next round, Comeau stayed on his positive message, even opting not to say anything negative about Eisen's memoir when asked why his fellow panelists should vote it off. Tong was tentative but pointed out that Abu Bakr al Rabeeah was somewhat removed from the direct violence of the war compared to Eisen's time in Auschwitz, which she argued made his experience all the more harrowing and therefore powerful to read. 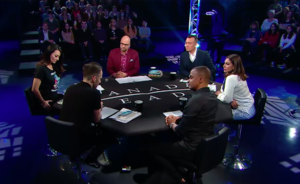 The debate in the end however came down to Tong's observation that Eisen and his fellow living Holocaust survivors are the last voices who had direct experience of the Holocaust, and are now all very elderly. She argued that the elderly are often pushed aside and their voices minimized. Comeau responded that the voices of youth are often treated similarly and reminded the audience that "this is happening right now".

They were in agreement however about the positive outcomes of reading. "I believe we can start a movement with books," said Tong, while Comeau praised the power of books to "make people reach out" to one another and "to build bridges between cultures". He went on to remind listeners that the refugee crisis is ongoing and that "in the next election, we can vote and make sure we don't bring in people" who wouldn't welcome refugees to Canada. "It's not about Ziya or me," he said, urging Canadians to educate themselves on the Syrian war and the plight of refugees.

In the end, it was Tong's argument about the devaluation of older voices that cinched her win. Both Joe Zee, who had defended The Woo-Woo by Lindsay Wong (Arsenal Pulp Press) and Truesdale, voted to remove Homes, noting how Tong's discussion of the erasure of older voices resonated with them. Truesdale in particular connected to her reasoning, saying he had initially thought he might vote in support of Homes, but that he was raised for a time by his grandparents and feels particularly strongly about the need to respect older voices and learn from them while it's still possible.

Lisa Ray, who defended Brother by David Chariandy (McClelland & Stewart), praised both books but ended up voting for By Chance Alone to be removed. Like Truesdale, she had a personal connection to her choice, mentioning that her husband is a refugee himself and hopes to tell his story, as Abu Bakr al Rabeeah has done, one day.

Upon winning, Tong joked "I'm a little verklempt" (a Yiddish word that alludes to being too emotional to speak), and urged readers to buy all five Canada Reads titles.

If you want to go back and watch all the action, you can check out Canada Reads online or on demand via the CBC Gem streaming service. Tomorrow morning (March 29, 2019) on CBC Radio One's Q, Ziya Tong and Max Eisen will discuss their big win with host Tom Power.