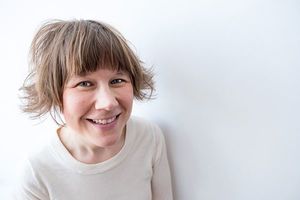 A Jessica Westhead short story is a magical thing. Her darkly funny, heartfelt stories of misfits, loners, and compelling weirdos have racked up numerous honours, including nominations for the ReLit Award, the Danuta Gleed Short Fiction Prize, the CBC Literary Prize for Short Fiction, and inclusion in the Journey Prize anthology - to name just a few.

Her newest collection is Things Not to Do (Cormorant Books), the follow up to her acclaimed And Also Sharks. It's an unmissable set of stories, with Westhead's trademark clarity, wit, empathy, and wild creativity on full display.

We're incredibly excited to announce that Jessica will be joining us at Open Book for September 2018 as our writer-in-residence, sharing her thoughts on writing and the literary world on our WIR page.

To celebrate Jessica's residency, we asked her to take our Dirty Dozen challenge, where we ask writers to share 12 unexpected facts about themselves. Get to know Jessica here, as she tells us about an escape artist pony, her ecological bonafides, and explains why "happiness is a hamster".

Stay tuned in September to hear much more from Jessica on all things literary.

The Dirty Dozen with Jessica Westhead

1. My least favourite job ever was a stint at the now-defunct Family Kartways in Whitby one summer when I was home from university. Initially the managers stuck me on the go-kart track, a miscalculation that guaranteed abysmal customer service for them and a hellish nightmare for me. From what I could gather, this was the plum job sought after by my younger colleagues—buff and bronzed gods and goddesses who flirted and cavorted through those endless, sweat-drenched days—but I was useless at it. The idea was, if a patron needed assistance, we had to sprint over to wherever they were stuck on the track, and either jimmy their kart back to life (by pulling the starter? Turning a key? I can’t remember and probably didn’t know at the time either) or else push it off to one side to avoid potential collisions. With zero mechanical skills and a deep hatred of running, I was unable and unwilling to do either of those things. The higher-ups eventually gleaned this and shuffled me off the mini-golf course and the kiddie-rides-and-petting-zoo area, which I enjoyed on the one hand because I could sometimes be alone with my thoughts and also had fun pretending to be a carnival barker, but on the other hand I was severely allergic to the hay bales in the petting zoo and regularly broke out in hives.

I also felt sad for the animals, which were clearly not receiving the best treatment. The pony would often escape and just run around and cause havoc until somebody lassoed him and dragged him back to his pen. In the end, I was laid off because I was the oldest employee and they didn’t like paying me more than everyone else—not because of the anonymous complaint I made to the Humane Society, though I panicked about that for a while—but I got my revenge by sneaking back onto the grounds one day and taping up multiple photocopies of a Whitby This Week article about an incident at the petting zoo with the tragic but magnificent headline, “Donkey Bites Tot.” I also left with the best tan I’ve ever had in my life.

2. I sort of believe in magic but I sort of don’t. My parents hired a magician for my seventh birthday party and he asked me to be his assistant but I said no because I was too shy, so my younger brother put up his hand and got to be the assistant instead. This has nothing to do with why I do or don’t believe in magic, but I still regret that decision to this day because at one point the magician pulled my hamster out of his hat, and I could’ve been the one to help him with that.

3. Now my brother, Cameron Westhead, lives in Alberta and is the MLA for Banff-Cochrane. Possibly because he was brave enough to be the magician’s assistant that long-ago day? There’s no way to know for sure. He’s also very smart and kind and has lots of skills, so those qualifications definitely had something to do with it. In any case, he’s doing good work and I am extremely proud of him.

5. I get over-the-top annoyed at people who don’t recycle properly.

6. I make excellent smoothies. The key is frozen bananas—always use them as your base and you can’t go wrong. My go-to recipe is a frozen banana, a few chunks of frozen avocado, almond milk, a little less than a tablespoon of cocoa, a tablespoon of peanut butter, and a tablespoon of ground flaxseed for additional health benefits. Try it—you’ll love it!

7. Value Village is my Happy Place. The moment I step inside one of their stores, I am suffused with a level of joy approaching delirium. I usually start at the jeans rack, and then (depending on the season) I make my way to either the sleeveless tops and summer-dress racks, or the racks of sweaters and long-sleeved knits. Short-sleeved knits are good too. Also shoes. And jewellery. And glassware. And books, but I’m ashamed to admit that’s the last place I look.

8. I used to think I was a good singer, but one day when I was about twelve years old, I put on my headphones and sang along to one of my favourite songs and recorded my unadorned voice on my tape deck and then played it back to myself and it was awful.

9. I have proud and tenacious Luddite leanings. I become unreasonably enraged when I’m forced do things online (because apparently we have to create online accounts for everything now). I am suspicious of technology because I fear change and I would rather just read an old-fashioned paper book and people actually need those jobs that are all being automated and I don’t want my daughter to be eaten alive by social media when she’s old enough to have her own phone and self-driving cars are ridiculously stupid and dangerous. But okay I guess there’s some good stuff about technology too.

10. My favourite recurring dream is the one where I can fly. But I have to start by running and jumping off someplace high up, such as a big hill. And then I gradually drift back down to the ground. So I guess it’s more floating than flying. Either way, it’s wonderful.

11. Not so long ago, when I used to eat ham, I remember enjoying a particularly delicious western sandwich while writing in my notebook at Jim’s Restaurant in Leslieville, which is sadly out of business now but did indeed serve “the best westerns,” and the TV was playing highlights from a Toronto City Council meeting and I watched the brother of our mayor at the time yelling at everyone and I felt an inexplicable sense of dread, which I now understand.

12. When I was little, I had a series of pet hamsters. The first one was my favourite. I named her Tiffany and she used to fall asleep in my hands, and my brother and I taught her to climb the stairs in our house. One night, a strange tickling on my foot woke me up and I was terrified it was a tarantula. But thankfully when I investigated, I found Tiffany hiding under my blanket. She lived in a cage on a table in the basement and somehow she’d escaped, jumped down onto the concrete floor below and survived unhurt, climbed four sets of stairs, and ended up in my bed. She was the best hamster ever. On a family trip to Niagara Falls many years ago, I made this good-luck coin to honour her memory. 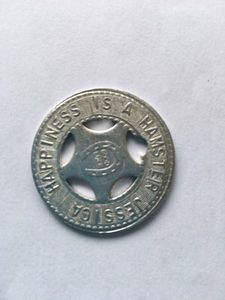 Things Not to Do

Jessica Westhead's follow-up to And Also Sharks, a Globe and Mail Top 100 Book of 2011 and Finalist for the 2012 Danuta Gleed Literary Award.

Things Not to Do is a collection of stories that seeks to examine—through humour, wit, empathy, and honesty—the dark side of ordinary people. We know them; sometimes we are them. A man attends a gathering on the coattails of his new, zealously empowering friend. A woman helps her husband build an escape room to free him from working for a hated boss. A veteran wedding DJ imparts wisdom, and more besides, to a new recruit. The father of a teen pop sensation gathers with his fans in the wake of a controversy. The actions of these characters, for good or ill—and there is light in their lives, as often as there is dark—stem from the same place, and Westhead cuts right to the heart of that place. They aren't scheming supervillains; they're folks trying to make the most of what they think they have—even if that sometimes means stepping on someone who doesn't deserve it.