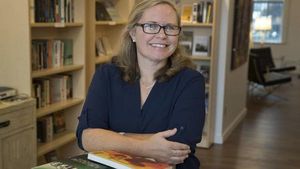 What story would you tell, if you knew it was the last one you would ever get to share? In Michelle Berry's The Prisoner and The Chaplain (Wolsak & Wynn), one man (the titular prisoner) is telling his absolute final story, right before he heads to his execution.

Complicated by questions of whether the prisoner is in fact guilty, whether his story is true, and what stories or guilt the chaplain himself might hold, the novel is a rich, thought-provoking, and compelling tale from a beloved and acclaimed author. Set in a tense 12-hour time period, the book flies by as the fateful moment approaches.

We're excited to have Michelle with us on Open Book today as part of our Lucky Seven questionnaire, where authors answer seven in-depth questions about their newest book. She tells us about her end-of-life obsession, the cell-like office that got her into the world of the book, and the caffeinated treat you can bring her to help speed the writing process.

My new book, The Prisoner and the Chaplain, is a bit of a departure for me. It’s not a family drama, really, although it still contains dysfunction. There isn’t much humour in it either, unfortunately. The book is about a Prisoner and a Chaplain on death row during the last 12 hours before the Prisoner is to be executed. Each man tells his own story until we aren’t sure, by the end, about the guilt of the Prisoner. Or about guilt in general. The book is structured as a countdown – each chapter is one hour closer to the end. I’ve always been obsessed with guilt and death and how people react at the end of their lives. I wanted to put two characters together towards the end of a life and I wanted it to be a death that was pre-determined, that they had no control over. I wanted to examine the prisoner’s reaction to his last hour, minute, second. I wanted to think about guilt. And I wanted to tell their stories. I wanted to see the bond that forms between two characters stuck together in such a charged situation. Of course when I started to write the novel I had none of this in mind – I just put them in a room and started typing.

The question I followed all through was: was the Prisoner guilty or not guilty. I knew the Chaplain was guilty, we all do from the very beginning, but I didn’t know if the Prisoner was until I got to the end. And I played with the end in so many ways... couldn’t figure out how to end it for a long time... until I think (hope) I got it right. So much I can’t say because it’ll ruin the ending for you. So the central theme is guilt and punishment, I guess. For both the Chaplain and the Prisoner.

It took 9 months to write and then 3 years to edit, sell and publish. I had rented an office in Peterborough (where I live) and gave myself Monday-Wednesday to write and Thursday and Friday to teach (online at U of T). I wrote on the weekends too, actually. The office was almost as small as a cell in Death Row – and just about as grungy – so it was really conducive to writing this book. The ending changed a lot because I wanted a bit of a twist that no one could expect – and because of this, I couldn’t make it obvious for even myself.

I need quiet. I used to put music on while I write, but rarely do anymore. If I’m writing at home I can’t write when anyone in my family is home. I need two cups of coffee a day (preferably cappuccino if anyone ever wants to bring me one!), I use a lap top, need a comfy chair. I like to roll around in chairs a lot so one with wheels is great. I like to do some sort of exercise before writing –like a bike ride. And I like to clear off anything on my To Do list – answering emails, laundry, etc. Of course, owning a bookstore and working Monday to Friday in it changes all of this. I do, however, have a chair with wheels in the store.

I used to get frustrated but now I just read. I tell myself that it’s just as important to read in order to remember why I’m doing this – what is that thing that a novel does to me? How can I duplicate that? Why do I want to write? Because of this feeling, etc... I used to write all the time, but now I take months off. I know that letting a book rest for awhile is the best thing you can do – you go back to it so fresh. I also make outlines (visual ones involving photographs or white boards or sketches or just lists) when I’m stuck. Try to make myself remember what I wanted to do, where I wanted to go in the book. I don’t make an outline to start, but sometimes halfway through or before the first edit I do a very thorough one.

A great book is any book that YOU, personally, are inspired by. Owning my bookstore I realize now that I can’t be a snob – a book I don’t like is, of course, loved by another. A great book is a book that makes you think long and hard after reading it, or makes you laugh out loud while reading it, or just won’t leave you, the images the book has formed always in your head, that’s a great book. A great book should make you look at the world in a new way. It should make you see everything that is in it right in front of you. I can’t even pick one to recommend. All books do something different to me. A great book can also be one that you loved while reading but don’t remember the minute you put down. It’s the experience that you get at that exact moment in your life.

My bookstore! Hunter Street Books in Peterborough, Ontario. I’m focused on running it while also doing my job of around 7 years -- teaching at U of T (online creative writing). I’m also an Adjunct Professor at Trent and hoping to eventually co-supervise graduate students. And, of course, I’m fiddling with a new book, but it’s too early to speak about.

Michelle Berry is the author of three books of short stories and four novels, including This Book Will Not Save Your Life (which won the 2010 Colophon Award and was longlisted for the 2011 ReLit Award). Her writing has been optioned for film and published in the UK. Berry is a reviewer for Globe and Mail, and teaches at the University of Toronto and Humber College. Born in California and raised in Victoria, BC, Berry now lives in Peterborough, ON, where she operates an independent bookstore, Hunter Street Books.

The Prisoner and The Chaplain

What if prison was the only world that existed for you now and everything else was a story? What if you weren’t sure if you were guilty but wanted forgiveness in any form? The Prisoner and the Chaplain is about two men; one man awaiting execution, the other man listening to his story. As the hours drain away, the chaplain must decide if the prisoner’s story is an off-the-cuff confession or a last bid for salvation. As the chaplain listens he realizes a life has many stories, and he has his own story to tell – a last-ditch plea for forgiveness told to someone who will never be able to repeat it. Each man is guilty in his own way, and their stories have led them to the same room, a room that only one of them will leave alive. If you had only twelve hours left to live, what would you have to say?