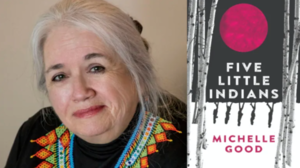 Michelle Good's Five Little Indians (HarperCollins Canada) was undoubtedly one of the biggest books of 2020, snagging nominations for two of the largest fiction awards in the country: the Scotiabank Giller Prize and the Atwood Gibson Writers' Trust Fiction Prize.

It was third nomination's a charm for Good, who last night won the Amazon Canada First Novel Award, the biggest prize for a debut novel in the country. It comes with a $60,000 prize for Good, and $6,000 will go to each of her shortlisted fellows: Francesca Ekwuyasi, Marlowe Granados, Sheung-King, Jael Richardson, and John Elizabeth Stintzi.

Five Little Indians has also been nominated for the Governor General's Literary Award, which will be announced on June 1, making Good one of the only writers to ever be nominated for all four major fiction awards in the country for the same book.

The powerful novel follows five teens who are wrenched from their families and sent to a church-operated residential school before being turned out into the world - in this case, Vancouver's troubled Downtown Eastside - with no support or resources. Good, a Cree writer and a member of the Red Pheasant Cree Nation in Saskatchewan, is a lawyer who has worked on behalf of residential school survivors for over a decade. She holds an MFA from the prestigious UBC Creative Writing programme, and had published widely as a poet before turning her hand to fiction.

In addition, Rama Altaleb was announced as the winner of the Youth Short Story Category, now in its fourth year. Operating under the umbrella of the Amazon First Novel Award, it celebrates authors between the ages of thirteen and seventeen. Submitted stories must be under 3,000 words, and the award carries a $5,000 prize.

Seventeen-year-old Altaleb was chosen as the winner by the First Novel Award’s panel of judges. Her story, “Lost Childhood,” earned her both the award and a virtual mentorship workshop with editors of The Walrus.