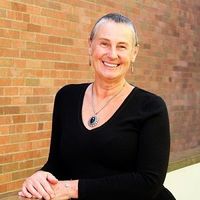 Author, activist, and law professor Julie Macfarlane has written extensively about our legal system, publishing books and articles over the course of her distinguished career that explore the role of justice and law in our society as well as our relationship to it. It wasn't until she sat down to write her new memoir, however, that the process began to feel different.

In Going Public: A Survivor's Journey from Grief to Action (Between the Lines, publishing Sept 8), Macfarlane opens up about her own experience as a survivor of sexual abuse, weaving her story into a bigger discussion around the challenges of speaking out and the various methods used by institutions of power to silence and intimidate survivors. Detailing the ordeal of taking her abuser to court, she highlights not just the public challenge of going up against a power structure, but the private moments of exhaustion in between.

Part memoir, part guidebook, Going Public uses Macfarlane's story of bravery and resilience to explain how survivors of abuse can defeat a legal system stacked against them, and how important it is for these voices to be heard, loud and clear.

We're thrilled to have Julie at Open Book today, where she discusses the cathartic release of writing her new memoir, kicking back against self-doubt, and the importance of having a supportive network.

Since this book is about my personal experiences of sexual abuse and sexual violence, the answer is obviously yes! But at the same time, the idea of “going public” about my experiences was central to my goal here, which is to empower other survivors to tell their own stories – to whomever they feel comfortable – and to provide an example of someone with a relatively functional adult life who is standing up and saying “Me Too”.

The deeper truth is that I am still figuring out what it’s going to mean to have all this detailed and often sordid information about my life out there for everyone to read. On the day the website blurb went up with the book’s title, Going Public, I admitted to my youngest daughter that it felt a little scary to be putting all of these intimate, painful stories out there. Her (loving but slightly exasperated) reaction: “You called the book Going Public,Mum. What did you think was going to happen?” was both grounding and a good reminder of my goal.

This book is completely different from anything I have written before. I have written and published books and academic articles – and more recently blogged and podcasted - about my research as a legal academic. My previous writing focused on stories of people seeking justice, lawyers trying to do better in meeting the needs of their clients, and how people see themselves and their lives in relation to law and the legal system. On the other hand, because of the nature of this work, I have worked with interview subjects for many years to tell their stories in an authentic and thought-provoking way. The big difference here was that my life is the story.

For the last ten years, and especially in my work as the Director of the National Self-Represented Litigants Project, I have been learning how to write about law and legal issues for the public and not just an academic or “insider” legal audience. So I felt ready for the challenge of integrating a legal analysis - of the processes I used as a survivor to find justice – with the telling of a story that everyone can read and understand and that many people, I hope, will be able to relate to.

I originally began to write a book about what I described as “academic activism” – meaning, how we can take and use our research about peoples’ lives and experiences to draw lessons about systems of power and privilege and what we need to do to build a fairer world. In the initial game plan, one of the book’s case studies was going to be my work on sexual violence, touching on my own experiences. I decided to begin with writing that particular chapter, and almost immediately I realized that this was a whole book.

It took me some time to wrap my head around the idea that I would be the focus of the book. This still makes me uncomfortable. My central question involves how we think about and understand sexual violence – in our social culture, in the legal system, in how institutions operate - and how we respond to survivors. And I eventually came to the conclusion that the most effective way for me to do that was to tell my own story.

My first challenge was finding a publisher. I have published with academic publishers for more than 30 years, but suddenly I was asking them to consider a book that, while including my usual legal analysis, focused on my personal experiences of sexual abuse and sexual violence. I suppose it was understandable that they were a bit thrown. I was dismayed and concerned that it was so difficult to get this type of material, both personal and critical of the system, published.

For a while I was very discouraged, and had many, many doubts about whether the book really was a good idea. But I was continuously encouraged and supported by my closest family, friends, and colleagues. Once I got started writing, I found that it was challenging, empowering, and a little cathartic in some ways (which then raised yet more self-doubt over whether this was just for me…). I was so relieved and happy to finally find my publisher, Between the Lines, which I believe is exactly the right press for this book. Their support throughout the writing and publishing process has been crucial, and especially as we navigated efforts to silence me.

Writing this book has certainly presented some special challenges that I have not experienced before in a lifetime of writing. Inevitably, describing some of my experiences was very triggering (I have chronic PTSD). Some days I would sit and write for hours (something I have always been able to do) – but then, when I stood up and took a break, I would realize immediately that I was jittery, often physically shaking, and nauseous. I was so absorbed in writing that I only noticed these things when I stopped. So I always needed a little recovery time after a writing binge. But as I have said and want to emphasize, I also found working on the book extremely cathartic and empowering.

I live on the north shore of Lake Erie. Our house is on a bluff above the lake, and we have a little cabin built right on the water’s edge, down four flights of steps. I love to write down there and take in the sounds and sights of the lake, which change constantly depending on the season (we have a heater down there for the winter months!). The occasional tornado aside, the sense of calm and tranquillity is profound. I feel very lucky to have such a beautiful place to write.

It’s also a great place for happy hour after a productive day of writing!

Dr. Julie Macfarlane is a Distinguished University Professor and Professor of Law at the University of Windsor. She was named a member of the Order of Canada in 2020. Macfarlane’s books include Islamic Divorce in North America: A Shari’a Path in a Secular Society and The New Lawyer: How Clients are Transforming the Practice of Law. She has researched and written extensively on dispute resolution, self-represented litigants and access to justice, and the legal profession.

Going Public: A Survivor's Journey from Grief to Action

Julie Macfarlane, Between the Lines

It took Julie Macfarlane a lifetime to say the words out loud—the words that finally broke the calm and traveled farther than she could have imagined. In this clear-eyed account, she confronts her own silence and deeply rooted trauma to chart a remarkable course from sexual abuse victim to agent of change.

Going Public merges the worlds of personal and professional, activism and scholarship. Drawing upon decades of legal training, Macfarlane decodes the well-worn methods used by church, school, and state to silence survivors, from first reporting to cross-examination to non-disclosure agreements. At the same time, she lays bare the isolation and exhaustion of going public in her own life, as she takes her abuser to court, challenges her colleagues, and weathers a defamation lawsuit.

The result is far more than a memoir. It’s a courageous and essential blueprint for going toe-to-toe with the powers behind institutional abuse and protectionism. Macfarlane’s experiences bring her to the most important realization of her life: that no one but she can make the decision to stand up and speak about what happened to her.