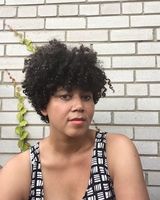 The portraits' remarkable subjects (some of whom has thus far received little attention) range from 1793 to the present and include: The Coloured Women's Club, Jackie Shane, Sylvia Estes Stark, The Hour a Day Study Club, Rosa Pryor, Sherona Hall, The Black Cross Nurses Mary Miles Bibb, Chloe Cooley, and Blockorama.

We're extremely excited to welcome Naomi to Open Book today. In celebration of the publication of Black Women Who Dared, we asked Naomi to share with us about the books that have inspired her through our WAR: Writers as Readers series.

She tells us about the Canadian novels that earned authentic LOLs, the iconic activist whose books she would love to give her younger self, and the recent read that was so good it inspired her to get "the flashlight out, old school style" to finish it at night.

The WAR series: Writers as Readers, with Naomi M. Moyer:

There have been a few books that have made me cry, but one that stands out is The Book of Negroes by Lawrence Hill. Although an important story to tell, the 'slave narrative' is cliché, triggering, and often problematic depending on who is telling the story and how it is told. When your own family has a historical connection and often times a direct connection to the slave trade, you realize how much all of that ancestral pain has been buried deep inside of you. Then you start making connections, police brutality, daily anti-black interactions or family members who suffer from PTSD, anxiety, and depression. It becomes clear that the very core of our economic autonomy and our familial relationships and communities suffer still, to this day, because of the slave trade. It isn't sad to just read about someone getting whipped, it's sad because we still have so much grief and so much healing to do as a collective and no one understands this more than Black people.

Miriam Toews is hilarious, I laughed out loud, yes the real LOL, when reading A Complicated Kindness. Eden Robinson's book Monkey Beach made me laugh out loud on the inside, a deep soulful laugh like an inside joke kind of feeling. Sorry, is that cheating by mentioning two books? I just think literature north of the 49th parallel is kind of amazing and needs more recognition.

A book that I have re-read many times:

I am one of those people that really loves to re-read books, there are so many amazing stories! I would say anything by Alice Walker because she is magical. There is one book on my bookshelf that is a bit tattered, the front cover is taped on and the pages are folded in many places and pencil marks, etc. It is by Christiane Northrup, M.D. and it's called Women's Bodies, Women's Wisdom it has been my reference book about a holistic kind of health for a long time.

The book I would give my 17-year old self:

My 17-year old self needed many books, but I would say anything by Bell Hooks. I think because I was so depressed from such an early age, there was no connection to why I was feeling what I was feeling and that is was ok to be feeling what I was feeling. Anger is depression turned outward and I had not turned outward yet as a person. Bell Hooks is really good at breaking down how Black women are affected by the imperialist white supremacist capitalist patriarchy. I would give my 17-year old self Killing Rage by Bell Hooks and a very good dictionary to understand it :)

I would say all books have influenced me as a person first and then as a writer. Back in 2002, I was living in California for a few months and was in San Francisco visiting some friends. I was amazed at all of the beautiful used bookstores in the city and I stumbled across Zora Neale Hurston's book, Mules and Men. I was blown away by Hurston's journey and her commitment to capturing the language of Black people and retelling our stories and histories. I thought to myself, this women is the real deal, she was doing such important work for Black people, especially in her time. I was so blown away when I found out that she existed my interest in Black history and everything about Blackness completely intensified because of her.

The best book I read in the past 6 months:

Definitely David Chariandy's book Brother just wow, so, so good. I have a toddler and literally have no time for myself. I co-sleep and I had the flashlight out, old school style, and finished the book in like a day.

Naomi M. Moyer is a self-taught, multidisciplinary artist and writer. As a Black woman, Naomi is forever interested in African diasporic histories and how they connect to Black identity. Naomi is a new mama and lives with her family in Toronto.

Inspiring and indomitable Black women whose stories need to be told.

Artist Naomi M. Moyer presents powerful biographical portraits of ten Black women and women’s collectives from Canadian and American history, ranging from 1793 to the present. Included are leaders and groundbreakers who were anti-slavery activists, business women, organizers who promoted healthcare, and educators who taught literacy and scholarship in Black neighborhoods.

The stories and beautiful portraits in this book will engage a wide range of readers. Celebrate these remarkable women—some of whom you may be hearing about for the first time—and the profound impacts they’ve made.