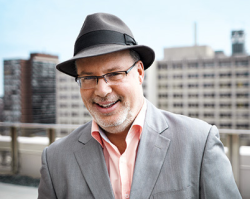 Former Walrus fiction editor and beloved U of T professor Nick Mount knows a thing or two about Canadian literature. Not only did he discover and boost many new voices during his time at the Walrus, but he's also considered one of the country's leading thinkers on our national literature, winning accolades and awards for his doctoral dissertation about early 20th Canadian literature, his research, and his teaching.

So it's no surprise that he was the right person to tackle the story of one of CanLit's most dynamic periods, the so-called CanLit boom that began in the late 1950s and carried on into the mid-1970s. The result of his research and reading is Arrival: The Story of CanLit (House of Anansi), an instant-classic for CanLit nerds and patriotic bookworms. The book covers titans like Atwood, Ondaatje, Purdy, Munro, Richler, Cohen, and more, but goes much deeper into the works and impact of these household names than has previously been done.

We're thrilled to welcome Nick to Open Book today as part of our Entitled interview series, to talk about why "Arrival" was the right name for this complex story. He tells us about the seminal text that saved House of Anansi 45 years ago, shares a memorable (and PG-13) poem title that stuck with him, and explains why he'll leave the story of the next generation of CanLit to another writer.

My new book is called Arrival: The Story of CanLit. It’s about the explosion of Canadian literature that took place between the late 1950s and the mid-1970s, the so-called CanLit Boom. It’s the story of the writers who emerged at that time—people such as Margaret Atwood, Mordecai Richler, Alice Munro, Marie-Claire Blais, Leonard Cohen, and many others—and of the society that produced, published, and read them.

My first book, When Canadian Literature Moved to New York, was about an earlier moment in Canada, a time when being a Canadian writer almost necessarily meant publishing and often living outside the country. The working title for that book was “Exodus.” I suspect Arrival came to mind for my new book partly as a response to my first book and to the story it tells, a story of departure.

It wasn’t until after I’d settled on the title that I realized it also paired nicely with the title of Margaret Atwood’s 1972 book, Survival: A Thematic Guide to Canadian Literature. Atwood and her publisher—my publisher, House of Anansi—called the book “Survival” not just because survival was the main theme it found in Canadian writing, but because surviving was what Canadian literature did. Survival sold 50,000 copies in three years. It saved Anansi and demonstrated a literature whose existence its title doubted. In the 1960s, Canadian literature didn’t just survive—it arrived. My book is about how that happened. 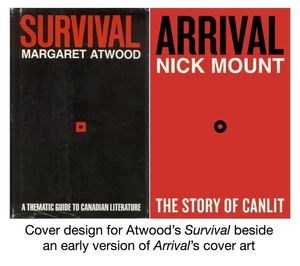 In fact, our first run at a cover was a deliberate homage/reply to Atwood’s book. I liked it, but the publisher felt it lacked excitement. The images on the final cover are also an effective way to say something the title doesn’t, that this is a story that takes place in the 1960s, a time of many other changes.

I write non-fiction, so for me the most important function of a title is simply to say what the book is about, hopefully in a memorable way. In this case, getting the word “story” in the title was important to me because it helps tells readers something about not just the subject but the method of the book.

In the late ‘90s, I wrote a piece for a Halifax magazine in praise of the Spice Girls and their movie, Spice World. Even then, I was substantially older than the typical Spice Girls fan. I called the piece "Old Spice".

In Canadian poetry, the best title I know of is for a poem in Al Purdy’s first book: “For Norma in Lieu of an Orgasm.”

The working title for most of the book’s life was simply “The CanLit Boom of the 1960s.” Functional, but boring. I also considered “The Rise and Fall of CanLit,” but it risked misrepresenting my argument and had already been used (by Matt Cohen in Saturday Night magazine in 1979).

Contractually, the title is the publisher’s decision, not the author’s. So you’d have to ask Anansi this question. Not everyone at the press was crazy about “Arrival”—some thought it wasn’t specific enough, and that the reference to Atwood’s Survival was too insider for a general audience. They’re probably right on both counts. In the end, I suspect we kept the title for the same reason bands often keep a name they thought was temporary—because they lived with it for long enough that it became who they were.

Getting ready for classes in September, as well as writing a lecture series based on Arrival that I hope to make available on YouTube.

I have toyed with a sequel to Arrival, but I’m not sure I’m the right person to write it. My distance from the people and events in Arrival let me tell the story as honestly as I could, but I think I might be too close to many Canadian writers of the next generation, my generation, to write objectively about them. We’ll see.

Nick Mount is a professor of English literature at the University of Toronto, award-winning critic, and former Fiction Editor at The Walrus. He regularly gives public talks on the arts in Canada, and has appeared on TVO’s Big Ideas and CBC Radio’s Sunday Edition. He is a two-time finalist in TVO’s Best Lecturer Competition. In 2011, he was awarded a 3M National Teaching Fellowship, the country’s highest teaching award. He lives in Toronto.

Arrival: The Story of CanLit

In the mid-twentieth century, Canadian literature transformed from a largely ignored trickle of books into an enormous cultural phenomenon that produced Margaret Atwood, Alice Munro, Michael Ondaatje, Mordecai Richler, and so many others. In Arrival, acclaimed writer and critic Nick Mount answers the question: What caused the CanLit Boom?

Written with wit and panache, Arrival tells the story of Canada’s literary awakening. Interwoven with Mount’s vivid tale are enlightening mini-biographies of the people who made it happen, from superstars Leonard Cohen and Marie-Claire Blais to lesser-known lights like the troubled and impassioned Harold Sonny Ladoo. The full range of Canada’s literary boom is here: the underground exploits of the blew ointment and Tish gangs; revolutionary critical forays by highbrow academics; the blunt-force trauma of our plain-spoken backwoods poetry; and the urgent political writing that erupted from the turmoil in Quebec.

Published to coincide with the 150th anniversary of Canadian Confederation, Arrival is a dazzling, variegated, and inspired piece of writing that helps explain how we got from there to here.