From modern parenting to living with anxiety and more, photographer and award winning author Michael Trussler's memoir-in-essays The Sunday Book (Palimpsest Press) is a relatable, poignant, and moving glimpse into midlife, aging, and self-discovery. Informed and connected by Trussler's adult diagnosis of a rare learning disability, he thoughtfully reflects on his life through the lens of a neuro-atypical experience, exploring the strange and unique moment in history at which we are living.

Moving between subjects as diverse as art, the Holocaust, and mental health, Trussler is able to tease meaning and wisdom out of moments both momentous and quotidian, making for a memoir that is driven equally by passion and keen intelligence.

Today we're speaking with Michael about The Sunday Book as part of our My Story series exploring memoir writing. He tells us about the big question that is central to the book's essays, shares a thought provoking quote from the memoirist Patricia Hampl about the nature of writing the self, and shares a moment that took place just five kilometres from the Auschwitz-Birkenau death camp that became a pivotal inspiration for the book. 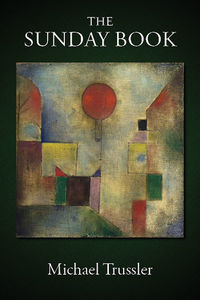 The Sunday Book is a collection of interwoven essays that engage with numerous subjects: the Holocaust diarist Etty Hillesum, the difficulties of raising children during the Anthropocene, being diagnosed with a learning disability in middle age. The latter was particularly crucial to starting the book because the diagnosis helped to explain my chronic depression and generalized anxiety. Finding out that I was neuro-atypical made me reconsider almost everything I’d previously thought about reality. Having to rethink my life in this way was very helpful in starting the book because creative nonfiction is partially based on returning to the past and reinterpreting it. What I’m passionate about is an age-old problem: how can this world contain incredible beauty and also atrocious misery? The plumage of birds, a painting by Bruegel or Frida Kahlo—these wonders exist alongside poverty, genocide, and other forms of violence. How?

The question that’s central to this book—and indeed everything I write—is simply stated and well-nigh impossible to answer: what does it mean to be alive now? That is, what is the nature of contemporaneity? As soon as you ask this question, a myriad others proliferate. How can the present be defined? Where does one go to look for it? And perhaps the most difficult: how can one get rid of one’s preconceptions to glimpse what life is like for other people, and indeed other species? On that note, I think it’s crucial for people to try to imagine how other species are living and dying now.

Paying attention to the present is also, perhaps paradoxically, important for thinking about historical events insofar as one needs to put aside “presentism” and recognize that, for previous generations, their present was as real, and perhaps even more real, than ours is to us. To try to step outside of what is here now and imagine, learn about, observe how others in the past faced their lives can be very de-stabilizing. The Sunday Book takes place within these questions.

Because I love painting and wish to learn more about the Holocaust, my research has involved going to art museums and memorial sites. When traveling, I spend most of each day walking, and this means that I can bump into anything. Not far from where the Nazi Gestapo had their headquarters in Vienna, I saw a graffiti artist doing some work on the Danube canal. Wearing a gasmask, he was utterly beautiful in his body movements; he was a hummingbird with a can of spray paint. I came upon him by chance and his graceful movements provided something of an antidote to the depressing, heavy atmosphere of seeing places where Nazi brutality had taken place.

The wonderful memoirist Patricia Hampl observes that the self isn’t “the subject of memoir... but its instrument.” Exactly. Writing creative nonfiction, one can delve into personal experience in order to explore things much larger than the individual self. It’s true that other forms of writing can do this—lyric poetry for instance—but here’s where the “fiction” part comes in: one can use various techniques usually associated with fiction writing—dialogue, narrative—but then juxtapose these techniques with rambling exposition, questions and so forth without having to worry about plot. Pacing is important, certainly, but there’s the sense that, in creative nonfiction, one can move in a variety of directions, using several forms, without having to resolve anything. I find this form to be very amenable to all sorts of formal experimentation that’s hard to succeed at doing in fiction.

Yes. I was having breakfast in a small restaurant in Oświeçim, Poland about 5 km from Auschwitz-Birkenau when I heard the theme song for David Lynch’s TV series Twin Peaks play over the Muzak channel. It felt totally incongruous to have the Nazi camp collide with Lynch’s occult murder mystery. Hearing the music, I was reminded of another trip, this one to New Mexico in 1990, and having watched one of the show’s episodes there on a Saturday night, heading the next day to a canyon in Arizona, a Sunday. I realized in Poland that numerous significant events had transpired to me on Sundays so decided to write about a number of them.

For a piece of nonfiction to be “great,” it must do two things. It must uncover, expose, explore, pay attention to the world in a singular fashion, so that the reader becomes aware of a new, finely-grained perspective that he, she or they had never encountered before. And the writer must be in love with sentences, all kinds of sentences, so that the reader stops reading to pause and take in an astonishing sentence. Consider Annie Dillard. Joan Didion. One of the finest books I know in this regard is The Hundreds, co-written by Lauren Berlant and Kathleen Stewart. This brilliant book is composed of mini-essays devoted to the social and psychological fractures that take place in everyday life. It’s very savvy in terms of theoretical awareness and the two writers have an eye for the revealing detail that is almost unprecedented.

I’m working on a new book of essays and a collection of poetry: the former exploring the nature of the lyric essay itself, painting, and our propensity for denial when facing uncomfortable realities; the latter attempting to tease out the unexpected things that are happening because of living within the beginning of the Anthropocene.

Michael Trussler writes poetry, short stories, and creative nonfiction. He is also a photographer. He’s published various books, including Rare Sighting of a Guillotine on the Savannah (Mansfield Press, 2021). His prize-winning work has appeared in domestic and international anthologies and journals. His collection of short stories, Encounters, won the Book of the Year and City of Regina Awards from the Saskatchewan Book Awards in 2006. Accidental Animals, a poetry collection, was short-listed for the same awards in 2007. He teaches English at the University of Regina.

In The Sunday Book, Michael Trussler uses memoir to excavate and explore a range of inner lives, all lived at different speeds. With essays touching on the meaning of the Holocaust in the twenty-first century to confronting the complexities of being a parent in the Anthropocene, Trussler’s interconnected essays are united by his lived experience with a rare learning disability. The Sunday Book freshly engages with fundamental existential problems such as free will and contingency, all the while providing an original take on our contemporary moment.