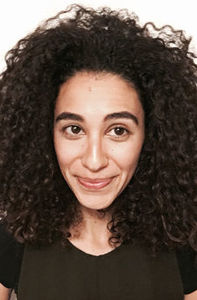 The Writers’ Trust of Canada has announced Noor Naga as the winner of this year’s $10,000 RBC Bronwen Wallace Award for Emerging Writers. Naga won the award for her poem “The Mistress and the Ping.”

Naga is already well on her way to a powerhouse career: Her writing (both prose and poetry) has appeared in The Puritan, Hart House Review, Muftah, and The Sultan’s Seal and was shortlisted for Room magazine’s 2015 Fiction Contest. She received a Canada Graduate Scholarship-Master’s, and the Mary Coyne Rowell Jackman Graduate Scholarship and Avie Bennett Emerging Writers Scholarship from the University of Toronto, where she completed her MA in creative writing. She currently lives in Alexandria, Egypt.

The RBC Bronwen Wallace Award recognizes writers who are under 35 and unpublished in book form, and alternates each year between poetry and short fiction. The award has a track record of identifying writers who go on to become beloved Canadian authors. It is supported by the RBC Emerging Artists Project and was presented at an event at Toronto’s Royal Conservatory of Music, hosted by poet Laura Clarke, who won the prize in 2013.

A jury composed of poets Adèle Barclay, Stuart Ross, and Moez Surani selected the winner from 140 anonymous submissions. Their citation reads: “The Mistress and the Ping" is constructed from exhilarating, mile-a-minute prose poems that are fresh, provocative, and often funny. These visceral pieces take surprising hairpin turns, pulling the reader through proclamations, inquiries, and bursts of self-doubt. Noor Naga achieves all this with a language that is rich and sensory, and a visually rigid structure that counter-intuitively unfolds to allow a multiplicity of pacing and play.”

Prize money of $2,500 went to each of the two finalists: Tyler Engström for “after thoughts” and Domenica Martinello for “All Day I Dream About Sirens.” Each of the nominated writers will receive a mentorship opportunity through which they will receive  writing feedback and guidance on career development from a senior editorial figure in the Canadian publishing industry. The winning and nominated poems, along with shortlisted works of recent years’ finalists and winners, are available for free download on iBooks at iTunes.com/BronwenWallace and you can read our interview with all three nominated poets here.

Congratulations to Noor, and we look forward to seeing what all three finalists work on next!