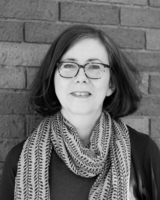 Ursula Koehl-Niederhauser is a teacher whose unexplained lapses of memory have her convinced she's suffering from dementia. Her husband Andreas and her young adult daughter Mia have their own struggles and are each, for their own reasons, unable to accept or perceive Ursula's troubles.

When a badly timed lapse means Ursula misses the news of her diagnosis, she becomes obsessed with the idea that she is ill. As each family member hurtles along their own dark path, their lives are also being drawn together again after years of distance as secrets, memories, hopes, and fears come crashing into the open.

Langhorst's storytelling is empathetic and wise, tinged with a tough northern wryness, and her prose paints a picture of cold, clear, stunning landscapes and a family whose love is flickering low but determinedly surviving.

We're speaking with Barbara today as part of our Long Story interview, where we invite novelists to discuss their new book, their writing process, and more. She tells us about why the character who was toughest to write became her favourite, the strange moments she's experienced where life imitated things she had written, and why she dedicated her novel to her "version of Tolkien’s fellowship".

Originally, I found it difficult to write Ursula, the protagonist of The Winter-Blooming Tree. It was tricky to make her a sympathetic character: she is feisty and somewhat prickly, and it was hard for a mild-mannered pleaser like me to make her admirable qualities evident. She has tremendously high expectations of all those around her (a trait I share but find painful to depict). However, she is also attempting to carry heartbreaking secrets, sorrows she won’t allow herself to remember, so, although it may have been more fun to write her charming but self-centred husband, Andreas, and their Millennial daughter, Mia, Ursula is the one I’m really attached to. She tries so hard to make things right, all the time; even when she’s terrified or bewildered, she’s always trying to do the right thing, not just for herself, but for everybody. And that’s something I can only hope to emulate.

The Winter-Blooming Tree shows us a crisis of lapsed memories, eerie dreams, and broken boundaries, narrated by three unreliable but well-intentioned family members whose interpretations of reality are so at odds that they can’t agree upon a name for the cat.

I did quite a bit of Internet sleuthing to supplement my knowledge of Swiss culture, which is based upon Swiss friends, a bit of time spent in Basel, and the help of my editor. My stories of the perils associated with immigration were shaped by family, friends, and students. I visited a homeopath and interviewed neurologists about brain tumours, various forms of dementia, heredity, anxiety, medication, and diagnostic tools. It was fascinating, all of it.

I had already had uncanny experiences when writing my first novel, Want. For instance, I wrote a scene set around a campfire, with the characters ensconced in Adirondack chairs—and a day later, my daughter brought home four brand-new Adirondack chairs and arranged them around the fire pit, without any idea of what I had written. There have been other moments since that book was released where it almost felt as though life were imitating fiction, but that’s impossible, right? Of course, I moved on.

When I started writing The Winter-Blooming Tree in 2016, my husband and I had been living on our acreage near Humboldt, Saskatchewan, for more than a decade. I had been teaching college in Muenster for nearly fifteen years. I set the novel in Edmonton, Alberta, where I was born, and Athabasca, 160 km north, the town nearest the family cabin at Baptiste Lake. I knew the area well, and it only made sense for Andreas to work for Athabasca University (a fine distance university whose physical campus happens to be situated on land that once belonged to my favourite uncle).

However, before the novel was finished, my husband and I made a sudden decision to move back to Edmonton to be near family. Looking back, that seems like a fairly risky choice, given the pandemic. But when we had sold our sweet little SK home and moved into our new place, I needed work. I found a position that was perfect for me—to my utter astonishment—with none other than Athabasca University. Imagine my surprise and delight! I talked with my publisher and we rebuilt the novel in Saskatoon and Humboldt. I redesigned the characters’ side-split as a two-story home to accommodate the differences between houses built on the hills of Athabasca and those on the flats of Humboldt. Andreas’s role changed, too; he became an itinerant sessional, driving to colleges around SK, which gave me a chance to acknowledge the precariousness of that kind of work.

But there was one other very odd moment. My editor asked me to write a scene where Mia loses her job, and the very day after I’d done that, someone dear to me was laid off. Thank heavens, she bounced back, better than ever. And now we’re here, living the dream, and the book feel just right. We’re all employed in work that we enjoy, and the SK setting has forged one more lasting, loving connection to a place we truly knew as home. But I won’t be writing any murder mysteries.

I wrote The Winter-Blooming Tree “for the nine,” a gentle allusion to our version of Tolkien’s fellowship, those of us who loved life on our acreage: our horse, Comet; our dogs, Dusty and Rudy; our cats, No-Ears, Sydney, Dante, and Peaches; my husband, Michael; and me, myself. There was even an eerie red glow in the night sky from the potash mine we called Mordor.

Born and educated in Edmonton, AB, Barbara Langhorst taught at St. Peter’s in Muenster, SK for nearly twenty years. Her first book, restless white fields (NeWest 2012), won poetry awards in Alberta and Saskatchewan. Her debut novel, Want (Palimpsest 2018), was shortlisted for the Regina Public Library’s Book of the Year. Her next novel, The Winter-Blooming Tree, will be released by Palimpsest in fall 2021. Back in Edmonton once more, Barbara shares a tiny perfect kitchen with her husband Michael and their beloved pets.

The Winter-Blooming Tree draws us into the lives of Ursula Koehl-Niederhauser, a school teacher suffering from lapses of memory who is convinced that she has dementia; Andreas, her charming, well-intentioned but somewhat self-absorbed husband; and their grown daughter, Mia, who is about to move home after bouncing all over the country, trying to find herself as a journalist. Distracted by thoughts and memories of the winter-blooming apple tree in her laundry room, Ursula misses the neurologist’s diagnosis and becomes convinced she is falling ill. Andreas, certain that she is fine, refuses to worry her with his own work and health problems. Mia, caught up with her own situation, has no idea that her parents are struggling and can’t understand why her mother, especially, is behaving so badly. The Winter-Blooming Tree delves into the dissonance between family members and how sometimes pride is the only thing standing between those we love and the stories we tell ourselves.